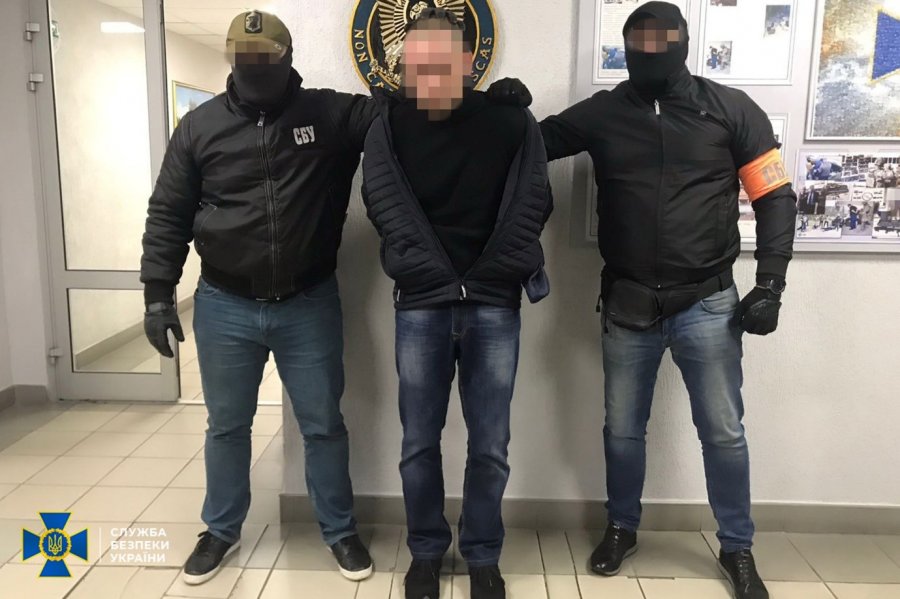 Detained man believed to be Denis Kulikovsky, or ’Palych’ Photo from SBU

According to Ukraine’s Security Service [SBU], the alleged head (or head ‘guard’) of the notorious Izolyatsia secret prison in occupied Donetsk was detained in the early hours of 9 November.  The man was identified as Denis Kulikovsky, or ‘Palych’, by Stanislav Aseyev, Ukrainian writer and former Izolyatsia hostage, who has written in detail about both Palych and the forms of torture used against both men and women held prisoner at Izolyatsia.  Aseyev referred to Kulikovsky as “the chief war criminal of Izolyatsia”, adding, “I can now say that my life has not been lived in vain”.

The SBU did not name the individual and the photo provided blurs his face. He is referred to as “a former militant of the terrorist organization ‘DPR’ [the self-styled, but Russian-controlled ‘Donetsk people’s republic’] and head of the illegal ‘Izolyatsia’ prison in the temporarily occupied territory of the Donetsk oblast”.

“According to SBU information, this person organized and directly participated in murders and the torture of illegally imprisoned Ukrainian citizens.”

At present, he has been detained as part of a criminal investigation under four articles of Ukraine’s Criminal Code: human trafficking (Article 149); the formation of a terrorist group or organization (Article 258-3); formation of militarized or armed formations not envisaged by law (Article 260); and violations of the laws and practice of war (Article 438).   A court hearing, which is likely to remand him in custody, is likely on 10 or 11 November, with Aseyev mentioning in an interview that this will be in Mariupol.

These were the original charges, and more may, of course, be laid.  It is noticeable, however, and frustrating, that there is no mention of ‘war crimes’, as the law now adopted by Ukraine’s Verkhovna Rada has still, in flagrant violation of Ukraine’s Constitution) not been signed into force by President Volodymyr Zelensky.

Kulikovsky was detained at 2.30 a.m. on 9 November in Kyiv.  There are various questions about how he came to be in Kyiv, etc., however it seemed clear from Aseyev’s answers during the interview that these are best left unasked at present.  Aseyev himself is certain that the person detained is Kulikovsky.

It is clearly for a court in future to decide whether the charges against this particular individual are justified, etc.  The following is based on what at present is known about Kulikovsky and on accounts provided by many former hostages of the torture they endured at Izolyatsia, including at the hands of the person most commonly referred to as ‘Palych’.  This individual has often been described as “the chief butcher' [lit: executioner”] at Izolyatsia and a real sadist, whom former hostages have accused of torturing, raping and killing prisoners.

Kulikovsky is reportedly 37 and from the Donetsk oblast.  He apparently told one of the former hostages, Stanislav Pechonkin, that he had earlier worked in the Penitentiary Service.

The Izolyatsia Cultural Centre, on the territory of a former factory complex in Donetsk, was seized by Roman Lyahin and other militants’ in June 2014 and according to multiple sources, including the Office of the High Commissioner for Human Rights, was immediately turned into a prison. Its existence is denied by the DPR militants themselves, and no international organizations have been allowed into it, but there are multiple accounts from former inmates, including Stanislav Aseyev, Stanislav Pechonkin, Halyna Hayeva, Tetyana Honcharova and many others.

Since his release (as part of an exchange of prisoners) in December 2019, Aseyev has both spoken and written about Izolyatsia, including in the book «Світлий шлях»,  translated into English as ‘The Torture Camp on Paradise Street’.  He and other former hostages have given harrowing accounts of the torture applied, not only to extract ‘confessions’, but, as Hayeva has said, for the militants’ ‘entertainment’.  Such torture included the use of electric currents, attached to fingers, earlobes or genitals; rape; mock executions; savage beatings and more.

Kulikovsky appears to have been at Izolyatsia from the beginning until February 2018 when he himself, according to Aseyev’s information, found himself thrown into ‘DPR basements’.  This was formally because of excessive beating of hostages during one of his drunken bouts, however Aseyev suspects that there was a financial motive – that he had failed to ‘share’ with somebody.  He was later released and went to Russia.

The fact of Kulikovsky’s arrest is very far from a court trial and verdict.  There has been disturbingly little progress and no transparency about the trial of Roman Lyahin, despite his role both in the pseudo ‘referendum’ used to try to give the Russian and Russian-backed armed formation credibility and in the setting up of Izolyatsia, which former prisoners describe as a concentration camp.

There is seemingly more movement on the proceedings against Yevhen Brazhnikov, but this may well be thanks to the engagement of nine former inmates of Izolyatsia, including Aseyev.  It was their testimony that elicited outrage that Brazhnikov had been released as part of the exchange of prisoners on 29 December 2019 and that, eventually, prompted his arrest. Nine former hostages have insisted on being able to give testimony regarding Brazhnikov’s role in their torture.

Lyahin gave himself up, and is, presumably, providing testimony that would preclude his agreeing to becoming part of an exchange of prisoners.

Aseyev stresses the importance of people like Kulikovsky who can also provide information about Izolyatsia and, in particular, about the pivotal role of Russia’s FSB [Federal Security Service].  Due to the latter, Aseyev believes it likely that Russia will seek to get him exchanged or simply try to eliminate him and says that at the moment it is vital that Kulikovsky’s physical security is ensured. Asked (in the above-mentioned interview) about the possibility of such an exchange, Aseyev said that he would be fully in favour.  This is, firstly, because it would be a way of securing the release of Ukrainian hostages and, secondly, because Kulikovsky faces a far worse fate in Russian hands, than if he remains in Ukrainian custody.  Russia will understand that he has provided all kinds of incriminating evidence and their reprisals will be brutal.