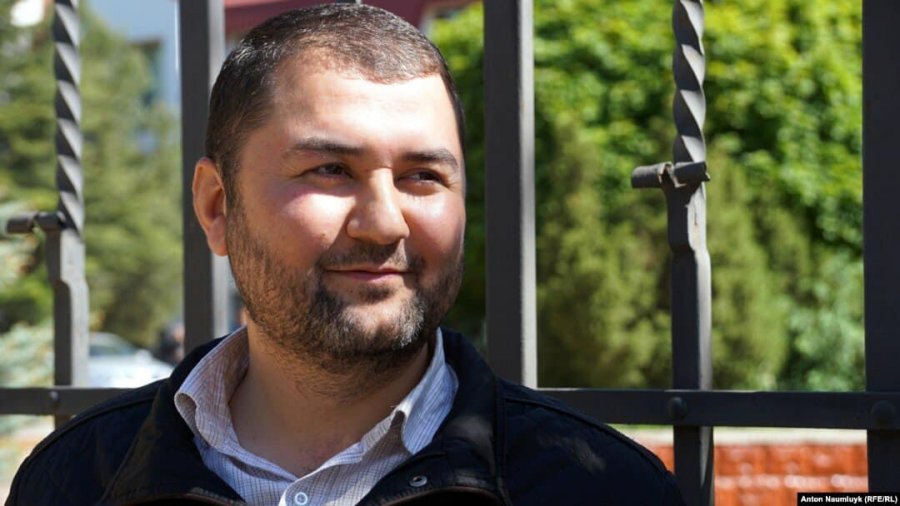 In a chilling new escalation in Russian repression in occupied Crimea, lawyer Edem Semedlyaev has been jailed for twelve days essentially for representing Crimean Tatars facing prosecution for trying to attend a political hearing.  Semedlyaev was also fined four thousand roubles for disobeying the officer who illegally ordered the lawyer to strip naked.  As fellow lawyer Nikolai Polozov has commented, this is not just the Russian occupation authorities’ personal revenge against Edem himself for his active position in politically motivated cases, but ‘a red spot’ to terrorize all lawyers involved in such cases.

The events on 25 October, and the rulings issued by ‘judges’ of the Russian-controlled Central District Court in Simferopol on 11 November are truly a new low, since a lawyer carrying out his work has been jailed and fined for ‘disobeying’ totally lawless orders.

After learning of the mass detentions, including of several civic journalists, on 25 October, Semedlyaev arrived at the station and set about providing the detained men with legal assistance.  He was in an office, helping one of the Crimean Solidarity journalists when another detainee was brought in who asked the lawyer to help him as well.  Semedlyaev promised to do so as soon as he was free, however the head of the so-called ‘Centre for countering extremism’, Ruslan Renatovich Shambazov refused to wait and said that they would draw up the other person’s administrative protocol (laying out the charges) without a lawyer present.

Semedlyaev immediately pointed out that this was illegal, and, when ignored, added that he would be videoing what was a clear infringement of the detainee’s rights.  Shambazov told him that videoing was not permitted, and the lawyer replied that he would, in that case, make an audio recording.  This is legal, however Shambazov claimed that the lawyer was ‘disobeying the legitimate order of an enforcement officer’ (Article 19.3 of Russia’s Code of administrative offences) and detained Semedlyaev.

Shambazov, a turncoat who betrayed his oath to Ukraine, presumably decided to enjoy his Russian-given ‘powers’ to the full and demanded that Semedlyaev strip naked.  The claim was that this was to check whether he had any ‘extremist tattoos’.  Semedlyaev obviously refused to do so.  This was not only because it is against his Muslim faith, but because he was there in his capacity as a lawyer and had been detained while he was providing legal assistance.  He did agree to empty out his pockets and to allow a visual inspection.

Shambazov chose to view this as ‘disobeying the legitimate demands of an officer’, with this a second administrative prosecution under Article 19.3.

Semedlyaev was held in custody for almost 24 hours, together with 21 other Crimean Tatars who were either at the ‘court’ as journalists, or to show support for the three recognized political prisoners Rustem Emiruseinov, Arsen Abkhairov and Eskender Abdulganiev

Although ‘court hearings’ against Semedlyaev were held on 26 October at the occupation Central District Court, neither ended that day.  In the case of Semedlyaev’s refusal to strip naked, ‘judge’ Sergei Demenok should have terminated proceedings on the grounds that this was so clearly an unlawful demand.  Instead, he merely sent the protocol back because of ‘mistakes’.  It was this same ‘judge’ who, on 11 November, found Semedlyaev ‘guilty’ of disobedience over the demand and imposed a fine of four thousand roubles.

Earlier on 11 November, ‘judge’ Aleksandr Voronoy at the same ‘court’ ruled that Semedlyaev, through his legitimate recording of a violation of a detainee’s rights had ‘disobeyed the legitimate order of an enforcement officer’ (under Article 19.3), and sentenced him to 12 days administrative arrest.   Voronoy chose to disregard Russian legislation, namely Article 24.3 of the same Russian Code of administrative offences which entitles those involved in administrative prosecutions to make audio recordings of proceedings in the case.

The rulings will, of course, be appealed.

This is not the first such attack on lawyers defending political prisoners in occupied Crimea, however the grotesque charges used to imprison Emil Kurbedinov twice were officially over a pre-annexation social media post, not his professional activities.  Both Kurbedinov and Lilya Hemedzhi have also faced absurd disciplinary measures aimed at getting their licences removed.

Since its brazen arrest of Crimean Tatar Mejlis leader Nariman Dzhelyal shortly after he returned from the inaugural meeting of the international Crimea Platform, Russia has been carrying out mass detentions of Crimean Tatars who were fully in compliance with Russia’s repressive laws on peaceful assembly. It has now also ordered the imprisonment of a lawyer for carrying out his work.