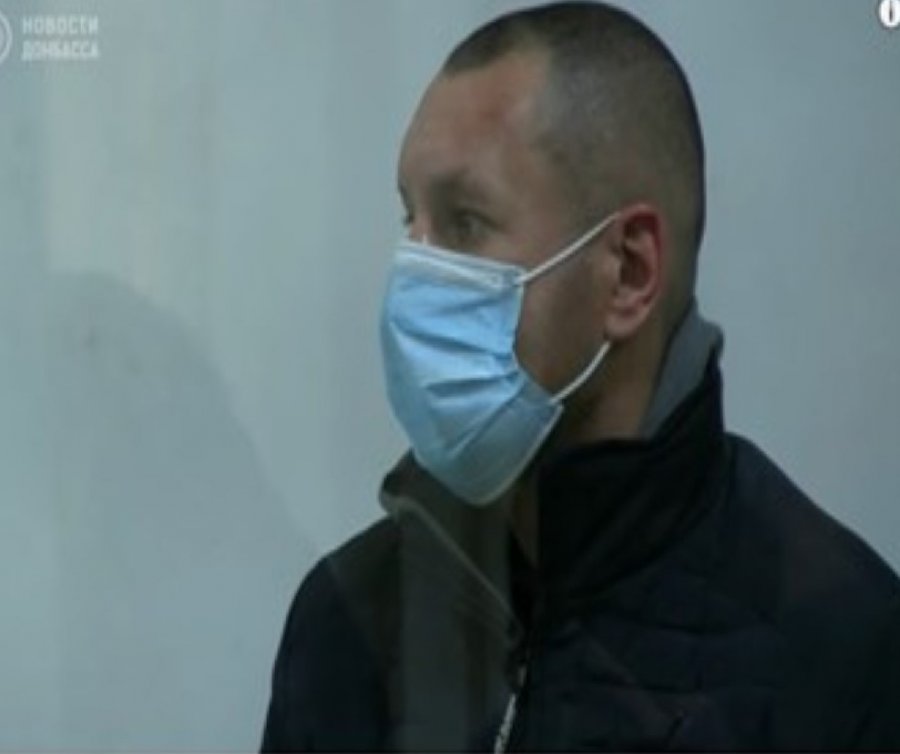 Denis Kulikovsky, or ’Palych’ in court Screenshot from News of Donbas video

Ukraine’s Security Service [SBU] has released a recording in which a man who appears to be Denis Kulikovsky, more notorious as ‘Palych’, describes his ‘work’ at the ‘Izolyatsia’ secret prison in occupied Donetsk; the methods of torture applied and the role of Russia’s FSB.  This probably should have been breaking news following the apparently dramatic seizure of Palych in the early hours of 9 November.  It has become harder to view it as such given the realization that Kulikovsky, whom former hostages have called the ‘chief butcher’ at Izolyatsia, had been living in Kyiv for over two years, with the SBU probably aware of this.

As reported, the SBU and former hostages, in particular Stanislav Aseyev, announced on 9 November that the former head of Izolyatsia / Kulikovsky had been seized that morning, at 2.30 a.m.   The SBU announcement stated that, according to their information, “this person organized and directly participated in murders and the torture of illegally imprisoned Ukrainian citizens.”   He had initially been presented with four charges: human trafficking (Article 149 of Ukraine’s Criminal Code); the formation of a terrorist group or organization (Article 258-3); formation of militarized or armed formations not envisaged by law (Article 260); and violations of the laws and practice of war (Article 438).

Kulikovsky was brought before the Prymorsky District Court in Mariupol on 10 November, and remanded in custody for two months.  Given the charges against him, and the number of former hostages doubtless willing to provide testimony, the refusal to allow bail was no surprise.  The same cannot be said of Kulikovsky’s announcement in court that he had been renting accommodation in Kyiv since 2019.  He had earlier earned money through sundry jobs, he said, but was, when arrested, unemployed. He told the court that he admitted guilt and regretted what he had done. The head of the SBU, Ivan Bazhanov refused to provide any comment regarding the fact that Kulikovsky had been in Kyiv for so long.  He said that they could not reveal certain details to ensure that the investigation was successfully completed.  He denied that Kulikovsky had reached a deal with the SBU, and said that if he had done so, he would never have been detained.

On 12 November, during Savik Shuster’s talk show ‘Freedom of Speech’, Stanislav Aseyev and Christo Grozev from Bellingcat provided details that suggest it was precisely thanks to their efforts that Kulikovsky was arrested.  Aseyev explained that he had, three weeks earlier, received reliable information that Kulikovsky had crossed into Ukraine from Russia in 2019, and that he was in Kyiv.  He immediately contacted Grozev who was able to confirm that same day that the information was correct. The following day, Grozev put Aseyv in contact with an ex-SBU officer who had been involved in a special operation over Kulikovsky in 2019.  The ex-officer confirmed that they had for some amount of time worked with Kulikovsky.  When asked by Shuster, Aseyev said that yes, Kulikovsky had, almost certainly, been used as an agent.

The story is, it must be said, disturbing.  Aseyev asserts that since there would have been a conflict of interest had they approached the SBU, they turned to the National Police, and asked for operational help since they, as civilians, could not arrest Kulikovsky.  They found an individual who, originally for money, was prepared to reveal Kulikovsky’s whereabouts.  In fact, the SBU got whiff of all of this and, Aseyev recounts, began “frantically searching for Kulikovsky” themselves.  The informer, having understood, that the SBU would be unlikely to pat the person on the back for making them look bad (by handing Kulikovsky over to the National Police, and not the SBU), provided the information on 8 November, but without taking any money.

None of this is, of course, evident in the SBU statement on 9 November.  Earlier on 12 November, the SBU published what it called some elements of Kulikovsky’s ‘testimony’.  During the five minutes, Kulikovsky describes what he did at Izolyatsia, answering for ‘security’ until December 2014, after which he became the head.  He says his role was to “extract, so to speak, truthful testimony” and describes the methods of torture applied, the role of the person hostages called ‘Doctor’ or Doc, but whom Kulikovsky names as Stanislav Simonov, in both taking part in torture and reviving people if the torture went too far.  He also states that during every so-called ‘interrogation’, there were Russian FSB officers present, as well as those from the so-called ‘ministry of state security’ of the armed formation, calling itself the ‘Donetsk people’s republic’. He worked at Izolyatsia till January 2018 and says that officers from the FSB, Moscow central counter-intelligence came and took him away. In a separate scene, he states that FSB officers mainly worked with Vasily Viktorovych Yevdokimov, known as ‘Lenin’.

From the point of view of actual testimony, the video repeats all the features we normally condemn when produced by the FSB or the armed formations in Donbas.  Only Kulkovsky, albeit with his face obscured, is seen, and there is nothing to suggest that a lawyer was present, as should have been the case given the seriously incriminating testimony he was providing.

There is, however, one crucial difference, namely the number of former hostages who will almost certainly both corroborate Kulikovsky’s words and add more detail. During the Savik Shuster show, for example, Aseyev called the five minutes of testimony only a tiny percent of what Kulikovsky was responsible for.  He says that Kulikovsky day by day, throughout the year, tortured people – using electric currents (attached to parts of the body, including the genitals); forcing people to stand, arms and legs spread out against the wall for many hours with Kulikovsky and Simonov taking part in beating them if they collapsed.  He provides other examples, and calls Kulikovsky a psychopathic sadist who is, nonetheless, fully capable of answering for his actions in court.

Kulikovsky’s statements about the FSB correspond to accounts from many former hostages.  During the talk show on 12 November, Shuster also spoke with Christo Grozev by video link.  Grozev explained that they (at Bellingcat) had begun their investigation after meeting Aseyev (who was released in December 2019).  They were able to swiftly establish the Russian passports of some of the butchers (literally ‘executioners’) – he names Yury Kryvonis; Volodymyr Butenko and Ruslan Yeremichev.  All of these were earlier identified by Aseyev as involved in torturing hostages.   Grozev goes on to explain that after reading Aseyev’s book about Izolyatsia, he understood that it was important to search, not only for those who carried out the torture, but those who gave the orders. He told Shuster and his audience that they had reached the conclusion that Izolyatsia is under the control of the FSB.  He promised that there would soon be a publication on their findings.

Aseyev and others have stressed the importance of testimony from individuals like Kulikovsky who can confirm that Izolyatsia is being used as a prison and torture chamber. Testimony about the role of Russia’s FSB is also crucial.

At present, the SBU are asserting that there was no collaboration with Kulikovsky and are ignoring other very pressing questions such as how a person accused of such grave crimes should have been released two years ago. You would hope that this was a deal and that Kulikovsky provided vital information, although it is hard to imagine what information would be worth risking credibility by forgoing a proper trial.  Kulikovsky himself has made it clear that he does not want to be part of any exchange of prisoners and, as Aseyev pointed out on 9 November, he doubtless knows that he has far more to fear from the FSB, than from Ukraine.

As reported earlier, there have been concerns about other trials of people implicated in the creation of Izolyatsia and in torture.  There has been disturbingly little progress and no transparency about the trial of Roman Lyahin, and it was only after considerable protest that charges were finally laid over his role in seizing Izolyatsia and turning it into what former hostages call a concentration camp. There is seemingly more movement on the proceedings against Yevhen Brazhnikov, however this seems to be also thanks to Aseyev and other hostages.  Brazhnikov is also unlikely to have had the kind of insider information that Kulikovsky would have enjoyed.

The questions over Kulikovsky will not go away and it is to be hoped that the SBU will provide belated answers.