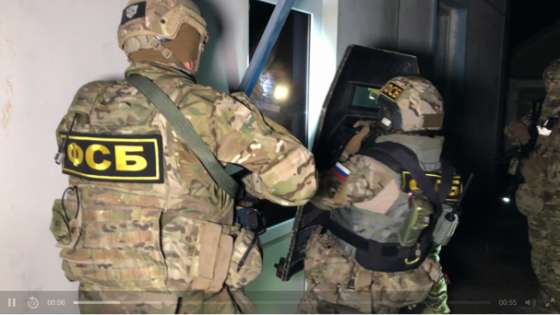 A ‘court’ in occupied Crimea has sentenced a Russian military serviceman to just three and a half years’ imprisonment for a fatal attack on the security guard of an Evangelical Baptist church in the village of Sofiivka.  This is the latest of several insultingly short sentences that contrast sharply with the 18-20-year sentences passed against Crimean Tatar civic activists who have committed no crime at all.

The Crimean Human Rights Group [CHRG] reported details of this latest example of what it refers to as selective justice on 14 November 2021.  According to the sentence passed by the occupation ‘Crimean Garrison Military Court’, the attack occurred in Sofiivka on 23 May 2020.  The serviceman, Pavel Svidersky was returning from fishing in a drunken state.  At the Church of Evangelical Baptists, he saw the guard, asked him a question and then proceeded to beat him up. The ruling even states that the beating was “motivated by religious intolerance”.

A forensic examination confirmed that Svidersky had kicked the guard so hard in the face that he caused a fracture of the left parietal bone; cerebral contusion (traumatic brain injury); haemorrhaging and much more. Most importantly, the examination specifically stated that life-threatening injuries had been inflicted.

Criminal proceedings were even initiated under Article 111  § 2.e of Russia’s criminal code (deliberately inflicting grave damage to health on the basis of religious enmity).

However Svidersky’s victim died five months later.  Despite a huge number of injuries, some of which were found to have been life-threatening, it was claimed that the man had died of a stomach ulcer with bleeding.

It was then that the Russian-controlled ‘prosecutor’ removed the religious enmity motive and changed the qualification to merely causing grave damage to health (Article 111 § 1).  On that lesser charge, he was sentenced to 3.5 years in a medium security prison colony.

Oleksandr Sedov from CHRG notes that Russia’s selective justice can be seen in the lenient sentences passed on Russian military servicemen as contrasted with the horrific sentences against Crimean Tatar and other Ukrainian political prisoners.  The Russian Black Sea Fleet serviceman, Yevgeny Zaitsev who shot and killed Ukrainian soldier Stanislav Karachevsky was sentenced to a mere two years’ imprisonment, despite the charge quite correctly being of homicide.  Sedov notes that this sentence was issued by Rizvan Zubairov, one of the ‘judges’ of the Russian Southern District Military Court, who has been involved in passing sentences against Crimean Muslims of up to 19 years, especially for conversations on religious subjects.

While in the above cases, the Russian occupiers are clearly protecting their own, there may also be banal corruption in many trials not involving Crimean Tatar and other Ukrainian political prisoners.  On 19 October a Russian-controlled Crimean ‘court’ sentenced a man who had tried to set his partner alight in a drunken row to two years’ imprisonment.  That sentence was handed down the day before a Russian prosecutor demanded a 20-year sentence against Crimean Tatar historian Seitumer Seitumerov for discussing religious subjects in a mosque, as well as only slightly shorter sentences against Seitumer’s brother, Osman Seitumerov, their uncle Rustem Seitmemetov, and Crimean Solidarity civic journalist Amet Suleimanov.

Unlike the very real and life-threatening attempt to set a woman alight, the four Crimean Tatars were not accused of any actual crime.  Russia charged them, on the basis of innocuous conversations on religious subjects, with unproven involvement in Hizb ut-Tahrir, a peaceful transnational Muslim party which is legal in Ukraine and most countries.  Its members are not known to have committed acts of terrorism anywhere in the world, and the Russian Supreme Court’s secretive ruling in 2003 which declared it to be ‘terrorist’ is believed to have been politically motivated, a ploy to enable Russia to send Uzbek refugees back to Uzbekistan where they faced religious persecution. The sentences passed were almost as long as those demanded and, in Amet Suleimanov’s case, would be a death sentence since he is suffering from life-threatening heart disease.  In at least half of these cases, Russia targets civic activists and journalists, reporting on its human rights violations in occupied Crimea.

Other sentences against Ukrainian political prisoners are almost as long, and equally lacking in any crime.

Russia wanted a new ‘Crimean saboteur trial’, so they looked around for three Ukrainians