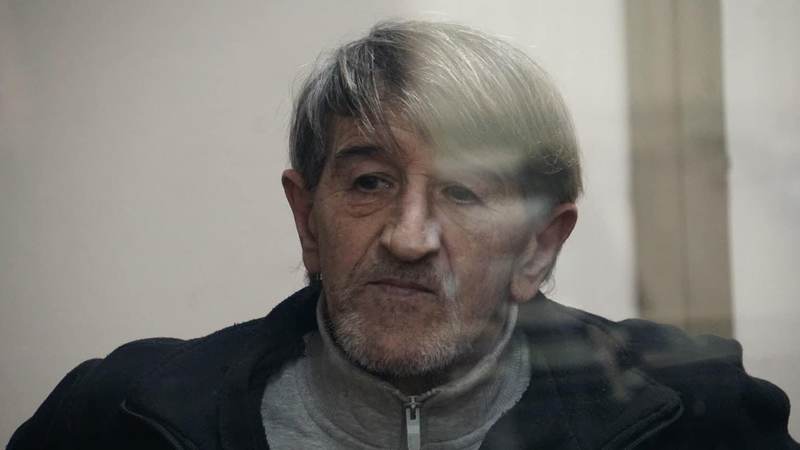 63-year-old Oleh Prykhodko from painful swelling of the legs due to the appalling treatment the recognized political prisoner is receiving in a Russian prison ‘for particularly dangerous criminals’.  The Ukrainian, who never concealed his vehement opposition to Russia’s invasion and annexation of Crimea, is being kept in a total information vacuum, and is not being passed the important medication that his family sends.

It was only in the second half of October, three months after Prykhodko had arrived at one of Russia’s worst types of penal institutions,  Prison No. 3 in the Vladimir oblast (Russia) that his lawyer, Sergei Legostov .  Legostov reports that there were flagrant infringements of his client’s rights during the meeting and that he is, in general, facing appalling treatment.

There was no confidentiality with the entire meeting taking place in the presence of a prison employee with a video camera who recorded their conversation.  The prison officer claimed that this was because Prykhodko had not written ‘an application’ for the meeting to be confidential.  This is evident nonsense, as Prykhodko had not been informed that he needed to do this, and he should have the right to meet with his lawyer in privacy. The men were, furthermore, separated by a glass barrier with the connection for speaking of poor quality, which was a major problem since Prykhodko has hearing difficulties.  They were stopped after 25 minutes because it was the lunch break, and Legostov was not allowed to return to continue the conversation.  This was all very clearly deliberate, since Legostov himself had arrived at the gates of the prison much earlier, but had been forced to wait outside, in the rain, for two hours.

There were other violations with potentially grave ramifications.  Legostov had brought important documents for Prykhodko to sign, including one about a cassation appeal against his five-year sentence, and another authorizing the lawyer to represent Prykhodko at the European Court of Human Rights.  He also needed to sign a form permitting his lawyers to reveal information about medical records; personal data and his answers to questions about the prison conditions. The prison staff refused to let him hand the documents over, with this potentially meaning that they could miss crucial deadlines.  Legostov was told that he could send the documents by post so that they could “check them for the presence of extremism or terrorism”.  Legostov believes that all of this, like the fact that the meeting was cut short, was deliberate and notes that, in practice, the constitutional right to legal assistance is not being observed.

During the meeting, Prykhodko did manage to inform him that he was not being handed the medication that his family are sending for him, and that he had not received any medical examination since arriving at the prison three months earlier.  This is ill-treatment for any prisoner, and is especially worrying given Prykhodko’s age.  He is held in an information void with the prison administration not passing him letters, and clearly also not sending Prykhodko’s letters, which he writes each day.  The swelling is a clear consequence of the fact that, in his solitary confinement cell, he is only allowed to sit or lie down during night hours.  There seems no limit to the brutality, with the prison staff even refusing to hand Prykhodko his personal items, including his family’s phone numbers.  Without them, he cannot write applications for phone calls to his family.

Prykhodko is one of at least three Crimeans, all with strong pro-Ukrainian views, who were arrested in the first three months after Russia’s last release of Ukrainian political prisoners.

In , the authoritative Memorial Human Rights Centre also considered some phone calls allegedly recorded.  These used very heated language, but gave no indication of plans to commit any specific actions.  The human rights group points out that the only specific details were from the alleged text messages which could very easily have been fabricated.  It was these which were found in an expert assessment to “be of a terrorist nature”.

Letters send an important message, telling him that he is not forgotten, while also showing Moscow and the prison staff that people from all over the world are watching their treatment of him. Letters need to be in Russian, and on ‘safe’ subjects.  If that is a problem, you could copy out the letter below, maybe attaching a photo or picture of your own.  Please do give a return address, so that Oleh can reply.