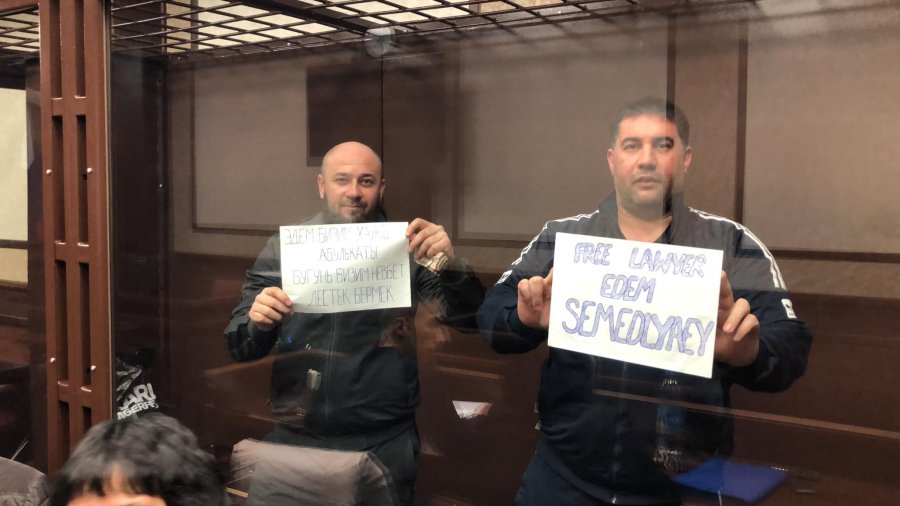 Two Crimean Tatars, Lenur Seidametov and Timur Yalkabov, are facing 15-year sentences on the basis of an illicitly taped conversation five years ago with an unidentified individua, first in a mosque, then over a cup of tea.  Although it was the stranger who raised all the religious subjects on which the flawed charges are now based, and at least one of the men can be heard trying to politely end the conversation, the FSB have claimed that this was a ‘conspiratorial’ meeting and arrested the two Crimean Tatars. The provocateur with a taping device is not officially part of the prosecution at all.

Seidametov and Yalkabov were arrested, together with four other Crimean Muslims, after armed searches at around 4 a.m. on 17 February 2021, with no pretence made of looking for anything but ‘prohibited’ religious literature.  Russia is increasingly targeting Crimean Tatar civic activities, and all of the men had played an active role in attending political trials; demonstrating solidarity with political prisoners and / or helping their families.  These prosecutions serve another cynical purpose since those FSB officers involved in them can hope for promotion, or at least bonuses for ‘good statistics.  This work involved is minimal since the charges are essentially copy-pasted from one case to another, and no inconvenient questions are asked by either prosecutor or court as to how a 5-year-old conversation about religion should now justify ‘terrorism’ charges.

Both Seidametov and Yalkabov are charged with ‘involvement’ in Hizb ut-Tahrir, a peaceful transnational Muslim organization that is legal in Ukraine.  A flawed and secretive ruling by the Russian Supreme Court in 2003, declaring Hizb ut-Tahrir ‘terrorist’ has been used since 2014 to sentence people to up to 24 years for often unproven ‘involvement’ in a peaceful organization.  Both men are charged under Article 205.5 § 2 of Russia’s criminal code, and face sentences of up to 20 years without being accused of any recognizable crime.

All of the cases following the arrests on 17 February are being fast-tracked, with no pretence made that a real investigation is needed.  Seidametov and Yalkabov have been imprisoned since their arrest, and were moved to a SIZO [remand prison] in Rostov (Russia) for the preliminary hearing into their trial in August.

The defence has stated from the outset that the ‘evidence’ in this case was obtained illegally and should not be used.  There was clearly provocation by the security service with the unidentified individual pushing the conversation in a direction that suited the prosecutor.  The men themselves say that they met the individual at a mosque in 2016 after which he invited them for a cup of tea. The prosecution has since claimed that the latter conversation was ‘a conspiratorial meeting’ organized by Seidametov.  In fact, the defence say, it is clear from the video that Seidametov was uncomfortable at this conversation and made every effort to leave the place where they were meeting.  All of this is particularly shocking as the questions that this individual was asking (in the knowledge that the conversation was being videoed) are similar to those later put to the FSB-loyal ‘linguist experts’ for their assessment.

It is possible that this individual is the same person who has appeared as  a ‘secret witness’ against many other Crimean Muslims.

The ‘secret witness’ in this case gave testimony on 15 November, under the pseudonym ‘Kurbanov’. The latter gave muddled and contradictory answers to questions, while claiming to have suddenly ‘remembered’ some testimony that he had not presented earlier.  Lawyer Refat Yunus said afterwards that it was abundantly clear that the man was making things up.

The trial is continuing at the Southern District Military Court in Rostov with the defence due to begin presenting their witnesses on 23 November.

Both Lenur Seidametov and Timur Yalkabov have been recognized by the renowned Memorial Human Rights Centre as political prisoners.