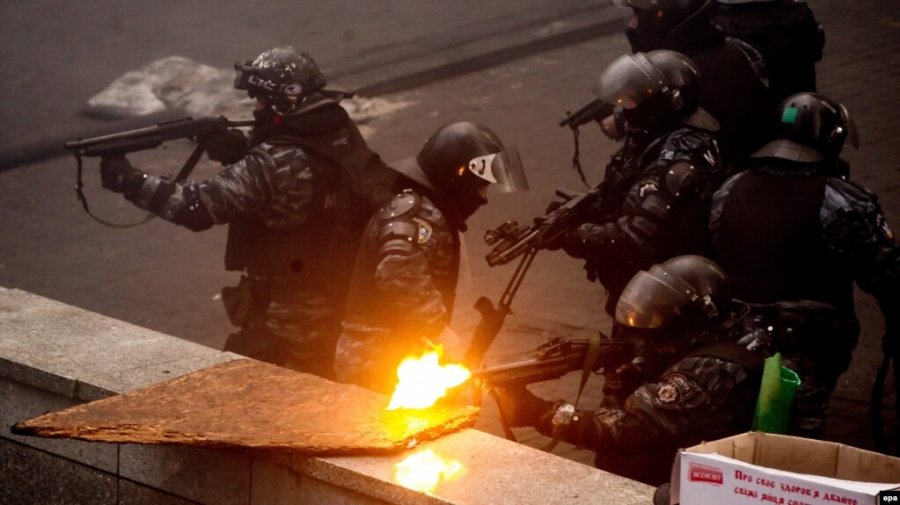 Ukrainian prosecutors have completed their investigation and named those whom they plan to charge with organizing the gunning down of unarmed protesters during the last and bloodiest days of Euromaidan, or the Revolution of Dignity.  Their trial will be in absentia since former President Viktor Yanukovych and nine high-ranking officials under his administration are all in hiding in Russia.  The fact that, under the present regime in Russia, the men will not face extradition does not negate the importance of receiving court verdicts following a proper trial. Judging by the new details given during the press briefing on 17 November, the trial is likely to reveal incriminating details about the contacts between the regimes of Yanukovych and of Russian President Vladimir Putin.  Such revelations are especially valuable given Moscow’s attempts to justify its invasion of Crimea and aggression against Ukraine through claims that ‘Ukrainian fascists’ had overthrown a legitimate president.

It has become standard over the past eight years for the enforcement agencies to announce some kind of breakthrough or progress around the anniversaries of the beginning of Maidan on 22 November 2013, and final days from 18-20 February 2014.   Any flurry of activity has often seemed at verbal level only. This time, however, the briefing on 17 November, by the heads of the Department on Maidan cases (Oleksiy Donsky and his Deputy, Denis Ivanov) and Prosecutor General, Iryna Venediktova did mention real progress.  This included on other Maidan cases, with five guilty verdicts in 2021 with respect to six individuals, with four real terms of imprisonment.  This may not seem so very much, but Donsky pointed out that it was almost as many as during the previous three years in total.  It remains to be seen, however, whether these sentences are upheld at appeal stage.

The main investigation, which is now complete, is, however, over those responsible for the appalling violence and bloodshed of the final days of Maidan, from the morning of 18 February 2014 until 20 February. All ten men are believed to be in the Russian Federation, with grounds for believing that two of them (Serhiy Kusyuk and Petro Fedchuk) have, since their flight to Russia, been engaged in helping the Putin regime violently disperse peaceful protesters.  Russia has, in all likelihood, granted all of the men Russian citizenship, as it has to a large number of former Berkut officers, wanted in Ukraine over their actions during Maidan.

The investigators have identified 1,019 individual criminal acts in this case.  The men will be charged under a formidable number of articles of Ukraine’s Criminal Code with the charges boiling down to the following: murder and attempted murder; grave bodily injuries; terrorism; obstructing demonstrations and exceeding powers and official duties.  The men are said to have acted as a criminal gang, with their actions including the organization of attempts to violently disperse protesters; the deployment of firearms, military and enforcement officers against unarmed activists, and the arming of titushki, or paid thugs.  67 civilians died as a result of those actions, with 13 enforcement officers also killed. 887 people received injuries of varying degrees of severity.

One important detail from the briefing was the fact that there were 12 phone conversations between Yanukovych and Putin during those bloody three days, as well as 11 phone calls between Interior Minister Zakharchenko and his Russian counterpart. Although the content of these calls is unknown, the mere fact that there were so many is already highly telling. Other such details were not revealed at the briefing in order not to hinder the case, however information will become available during the trial, Ivanov explained.  It is clear that there were constant consultations at very high level between the Yanukovych regime and Moscow.  Worth noting that a Ukrainian delegation to the Council of Europe in late January 2014 spoke with high-ranking European officials of fears that Putin was waiting until the end of the Sochi Winter Olympics, and that it suited him for Yanukovych to have bloodstained hands since this would ensure that the EU did not sign the EU-Ukraine Association Agreement.  The fears, unfortunately, proved warranted.

There were a large number of people involved in the crimes against Maidan activists, with no orders able to justify the gunning down of unarmed activists or other acts of violence and torture. In giving some of the figures for 2021, Donsky did acknowledge that they themselves see the number of convictions as inadequately small. He did, however, point to some progress, at least in terms of the number of people charged in 2021 (53, including 4 high-ranking officials and 4 judges) and the 22 indictments passed to the court in respect of 16 enforcement officers, 4 judges; 3 prosecutors and 10 other individuals. He said that they hope there will be a verdict in 2022 with respect to the only trials over the gunning down of activists on 20 February 2014.  As reported, five former Berkut officers: Oleksandr Marynchenko; Serhiy Tamtur;  Pavlo Abroskin; Oleh Yanyshevsky and Serhiy Zinchenko were arrested fairly early and charged over the killing of 48 activists on Instytutska St.  Their trial was expected to end in 2020, however, in a very contentious move, all five men were released on 28 December 2019. The following day, they were among the prisoners whom Ukraine handed over in exchange for hostages held by the Russian proxy ‘Donetsk and Luhansk people’s republics’.  Marynchenko and Tamtur later came back and are now on trial, while the other three men are to be tried in absentia.

There have indeed been four real sentences this year, however this is not necessarily a matter for congratulation given the number of cases that have been getting nowhere for up to eight years.

Two former Berkut officers – Viktor Eismont and Volodymyr Mokhon -  were sentenced on 14 June 2021 to three years’ imprisonment for their role in the violent dispersal of young Maidan activists in the early hours of 30 November 2013.  The court did not, however, find the men guilty of having obeyed a criminal order, although it was the sheer savagery of that Berkut attack on young people that turned Euromaidan into the mass movement now known as the Revolution of Dignity (details here).  The appeal has yet to be heard.

On 18 April 2021, Oleksandr Volkov was sentenced to 9 years over the abduction, savage torture and effective killing of 50-year-old Maidan activist, Yury Verbytsky and abduction and torture of journalist and Maidan activist Ihor Lutsenko (details here).  The appeal is pending

On 23 September, Titushki leader Yury Krysin was sentenced by the Darnytsky District Court in Kyiv to eight years over the abduction and torture of Maidan activist Vladislav Ivanenko in January 2014.  He is currently in prison after the Kyiv Court of Appeal overturned the shocking 4-year suspended sentence that he had received over his major role in the fatal attack on journalist Viacheslav Veremiy during Maidan, and passed a real 5-year sentence.  The new sentence has presumably been appealed.