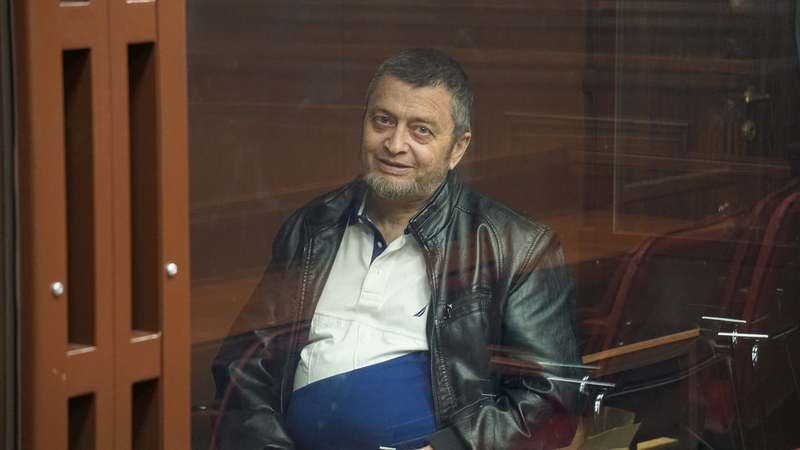 Dzhemil Gafarov suffers from a condition that should have prevented Russia from ever imprisoning him.  Instead the 59-year-old Crimean Tatar remains imprisoned in the appalling conditions of a Russian SIZO [remand prison] with no medical examinations or treatment. The procedure required for Gafarov to retain his disability status is also not being carried out, and the SIZO medical unit claim that they have no documents confirming this status.  All of this is very likely deliberate. Put most brutally, the lack of documentation will make it easier to fake the cause if Gafarov dies.

There is every likelihood that Russia will kill him, and such refusal to respond to his grave medical state can only be viewed as torture and a flagrant violation of the right to life.  Gafarov has told his lawyer, Rifat Yakhin that his kidney disease is progressing and he suspects he cannot last another six months without dialysis.  He said it takes him 4-5 days to recover after each court hearing, and that is when the hearing does not need to be adjourned.  There have been many such occasions with an ambulance being called either for him or for 61-year-old Servet Gaziev who is also in dangerously ill health.

Gafarov points out that it is next to impossible to call the SIZO medics and if the latter do turn up, they simply give him validol and tell him to turn to the head of the medical unit. The latter does not do anything to provide medical care, does not see people or provide consultations and does not take blood tests.  Gafarov’s current condition can only be gauged on the basis of blood and urine tests, yet the last time any such tests were taken was in July 2020.

Gafarov was diagnosed in 2017 with fourth stage chronic kidney disease, one level before kidney failure, and that same year suffered a serious heart attack.  Even before his arrest, his kidney filtration level was between a quarter and a third of what it would be for a person in good health.  Olga Mazurova, the Russian doctor who initiated a petition calling for Gafarov to be released from custody, warned back in November 2019 that his condition was typical of a person in pre-dialysis stage, and the situation now appears to be considerably worse.

In layperson terms, the poor filtration rate means that Gafarov effectively suffers a permanent state of blood poisoning.  It is indeed likely that he needs to be connected to a dialysis machine which would remove the waste products and excess fluid from his blood, which the kidneys are unable to do.

Yakhin and Gafarov’s wife, Raziye, have even had to apply to the courts to ensure that Gafarov was handed the medication they were providing, and to obtain any medical examination.  The problem with the latter, however, is that medical staff are afraid of annoying those behind the recognized political prisoner’s detention and will not recommend that he be, at least, released under house arrest.

The conditions in a Russian or Russian-controlled SIZO can damage the health of men who are much younger and in good health. In Gafarov’s case, his kidney disease has led to him developing very painful gout and swelling of the legs.  In the unsanitary conditions of the SIZO, with minimal possibility for exercise and proper diet, all of these conditions are exacerbated. The kidney disease is also increasing the likelihood of heart attacks and it was likely such an attack that led the authorities to have him admitted to hospital after a court hearing in the men’s trial on 10 June 2021. Despite the doctors being provided with all relevant documentation and his condition, the Southern District Military Court, which has become notorious for political trials of Ukrainian citizens, turned down the application on 17 June for him to be placed under house arrest.

Dzhemil Gafarov is a structural engineer.  He and his wife were bringing up three children, including two underage daughters (Tamilla, b. May 2003 and Sefaye, b. July 2006).  The armed and masked men who burst into their home early on 27 March 2019 tried to climb through the window of Sefaye’s room, before taking her father away.  Gafarov is not accused of any crime, only unproven ‘involvement’ in a peaceful organization, with the charges almost certainly stemming from his active role in attending the ever-increasing number of politically motivated ‘trials’ that Russia has brought to occupied Crimea.

Russia is directly jeopardizing the life of Dzhemil Gafarov and Servet Gaziev, although neither they, nor the other 23 Crimean Tatar civic journalists and activists, ‘on trial’ with them are accused of any recognizable crime.  All the Crimean Tatars arrested either on 27 March 2019 or, in the cases of Rayim Aivazov and Eskender Suleimanov, soon afterwards, are charged solely with ‘involvement’ or ‘organization’ of a Hizb ut-Tahrir group.  Hizb ut-Tahrir  is a peaceful, transnational Muslim party which is legal in Ukraine.  In 2003, Russia became the only country in the world (since 2016 joined by the no less repressive Uzbekistan) to call Hizb ut-Tahrir ‘terrorist’.  No adequate reason was ever provided for so labelling an organization which is not known to have carried out acts of terrorism anywhere in the world, yet since 2014 Russia has been using the 2003 Supreme Court ruling as pretext for imprisoning men for up to 24 years without any crime.

Since 2016, the FSB have been using ‘Hizb ut-Tahrir’ charges in occupied Crimea as a weapon of repression, especially against civic journalists and activists from the Crimean Solidarity civic initiative.  There is no evidence that the men were actually involved in Hizb ut-Tahrir, but this is no problem for Russia’s ‘justice system’ which uses FSB-loyal ‘experts’ to find ‘proof’ of involvement in an innocuous word  or in conversations about repression in Russia, as well as ‘secret witnesses whose ‘testimony’ cannot in any way be verified.  In this case, the conversations took place almost three years before the huge armed operation to seize the men.

PLEASE HELP by seeking reaction from politicians and human rights NGOs in your country, and by circulating information about this infamous attempt to imprison men for up to 20 years for their civic activism.

The petition to have Gafarov at least placed under house arrest can be signed here.

Please also write to the men.  The more letters they receive, the more Moscow will understand that its torment of men like Dzhemil Gafarov and Servet Gaziev is under scrutiny.