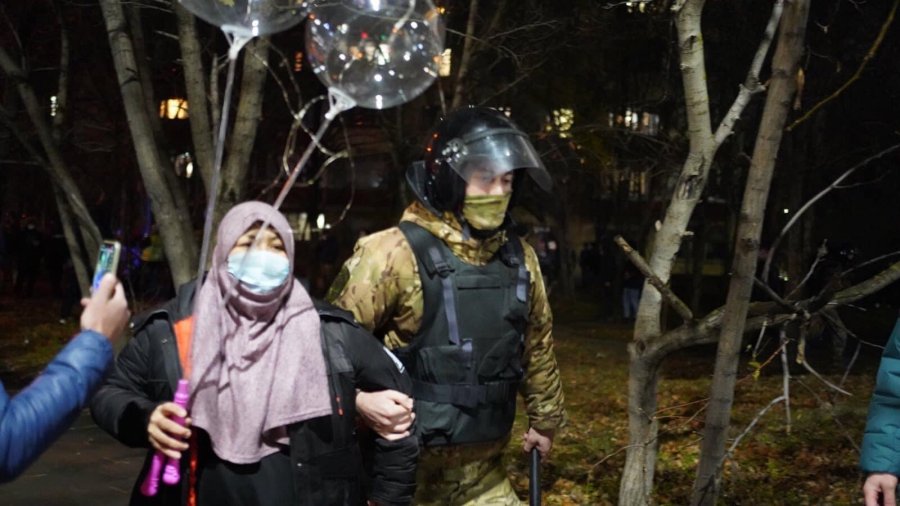 Russia is turning to open terror against Crimean Tatars with nobody spared.  31 Crimean Tatars on Tuesday evening after arriving at the temporary detention centre in occupied Simferopol for the release of lawyer Edem Semedlyaev who had just spent 12 days in detention for carrying out his work and properly representing people earlier detained.  Among those seized on 23 November were ten women and four civic journalists, reporting on the events for Crimean Solidarity.  In total violation even of Russian legislation, three women have been held in detention overnight, although all three have small children.

Wholesale detentions have become standard since the arrests (though apparent abduction) on 3-4 September 2021 of Crimean Tatar Mejlis leader Nariman Dzhelyal and four other men.  There were no grounds then for detaining, jailing and prosecuting relatives and others who were simply trying to find out the men’s whereabouts, and the same has been true of several such mass detentions since.  The detentions on 23 November did, however, hit another low, with the women detained having arrived at the detention centre with flowers and balloons to greet Semedlyaev, one of the lawyers who has tirelessly defended political prisoners.  The detentions were clearly planned with police vans standing in wait and the occupation police demanding that the Crimean Tatars disperse.  It is worth stressing that such treatment is evidently directed against Crimean Tatars, with Russia seeking to crush solidarity with victims of repression by ostentatiously demonstrating that any peaceful and totally legal demonstrations of solidarity could get them detained as well.

Those detained were taken to three separate police stations, with at least one of the lawyers who sped there to represent them prevented from doing so.  Nazim Sheikhmambet repeatedly showed his lawyers’ ID, yet was refused entry without any permission.  He was finally admitted but after several hours.

The fact that the three women have been held in custody overnight is a particularly brazen infringement of Russia’s own legislation.  As lawyer Emil Kurbedinov , detention in the case of administrative prosecution should be an exceptional measure (although, by the Russian occupation regime against Crimean Tatars it is increasingly common).  With respect to women with children under 14, such detention is positively prohibited, yet the three women detained are all young mothers.  Elvina Azizova has one toddler; while Fatime Yanikova and Nailye Ibragimova both have several children.  Both Fatime’s husband Farkhod Bazarov, and Nailye’s – Yashar Muyedinov are Crimean Solidarity civic activists who have been imprisoned since their arrest as part of Russia’s worst attack to date on against civic journalists and activists on 27 March 2019.  Their elder children may well remember the armed ‘searches’ with masked men taking their fathers away in handcuffs, and will doubtless be terrified when their mothers do not come home this evening.

It appears that the same Ukrainian turncoat Ruslan Renatovich Shambazov, responsible for Edem Semedlyaev’s detention on 25 October also played a role in the detentions on 23 November.  After betraying his oath to Ukraine, Shambazov has chosen to demonstrate his services to the occupying state by taking part in numerous cases of persecution as head of Russia’s so-called ‘Centre for countering extremism’ in occupied Crimea.

Shambazov was ‘at work’ on 25 October when Semedlyaev was helping one of the journalists detained outside the ‘court’ building involved in the appeal hearing against huge sentences passed (and upheld) against three recognized political prisoners  Rustem Emiruseinov, Arsen Abkhairov and Eskender Abdulganiev.  When Shambazov refused to wait until Semedlyaev finished with the detained journalist, and said that they would draw up an administrative ‘offence’ protocol against another detainee without a lawyer present.  Semedlyaev immediately stated that this was illegal, and when ignored, warned that he would take an audio recording of what is, unquestionably, a violation of the detainee’s rights.  This is perfectly legal, but Shambazov, drunk with his own sense of power and impunity detained Semedlyaev, claiming that the lawyer was ‘disobeying the legitimate order of an enforcement officer’ (Article 19.3 of Russia’s Code of administrative offences).  He then demanded that Semedlyaev strip naked.  The claim was that this was to check whether he had any ‘extremist tattoos’.  Semedlyaev obviously refused to do so.  This was not only because it is against his Muslim faith, but because he was there in his capacity as a lawyer and had been detained while he was providing legal assistance.  He did agree to empty out his pockets and to allow a visual inspection.

Shambazov chose to view this also as ‘disobeying the legitimate demands of an officer’, with this a second administrative prosecution under Article 19.3.

Semedlyaev was held in custody for almost 24 hours, together with 21 other Crimean Tatars who were either at the ‘court’ as journalists, or to show support for the three recognized.

On 11 November, ‘judge’ Aleksandr Voronoy  from the occupation Central District Court in Simferopol ruled that Semedlyaev, through his legitimate recording of a violation of a detainee’s rights had ‘disobeyed the legitimate order of an enforcement officer’ (under Article 19.3), and sentenced him to 12 days administrative arrest.   Voronoy chose to disregard Russian legislation, namely Article 24.3 of the same Russian Code of administrative offences which entitles those involved in administrative prosecutions to make audio recordings of proceedings in the case.

That same day, ‘judge’ Sergei Demenok found the lawyer ‘guilty of disobedience’ for having refused to strip naked and fined him four thousand roubles.

The sentences and persecution generally of lawyers in occupied Crimea were condemned by, among others, the EU and individual member states, the United Kingdom and international human rights organizations.

As of almost 2 a.m. on 24 November, none of the 31 men and women, detained on Tuesday evening, have been released.