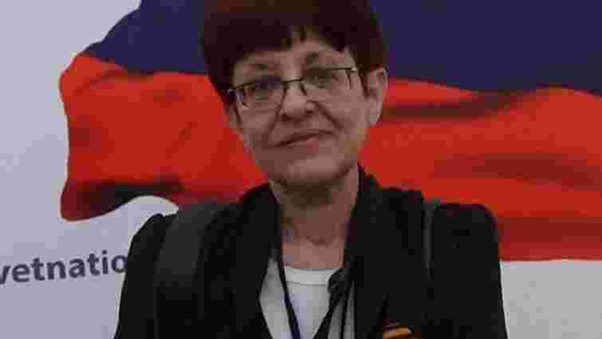 A court in Lviv has convicted Olena Boiko (Vishchur) of encroaching upon Ukraine’s territorial integrity and inviolability (under Article 110 § 2 of Ukraine’s Criminal Code) over her very active role in supporting Russia’s propaganda drive against Ukraine and separatism. Boiko’s arrest in November 2019 gained publicity in part because she had been deported from Russia, or, as she put it in a phone interview* from the train to Ukraine,  thrown out “like a dirty used rag”.

The trial was heard at the Halytsky District Court in Lviv, under Judge Vitaliy Radchenko.  The verdict notes that from August to October 2016, Boiko took part in various programs on ‘separatist’ media where she called for Ukraine’s borders to be returned to those which existed in 1939, for Western Ukraine to be handed to Poland; Bukovyna to Romania and Transcarpathia to Hungary and Slovakia.  She admitted that the words were hers, but denied the charges.

The 61-year-old was sentenced to 25 months’ imprisonment, however due to the so-called Savchenko Law on calculating the time spent in the worse conditions of a SIZO or remand prison, she will be regarded as having served the sentence because of the 412 days spent in SIZO.   The Savchenko Law was fairly controversial and was abolished in 2017, but the Supreme Court later ruled that it can still be applied where the offence was committed before 21 June 2017.

Zakhid.net notes that, although Russian state media invariably referred to Boiko), as “the well-known critic of the policies of (now former) Ukrainian President Petro Poroshenko, in Lviv she was known more for activities as a provocateur, than as a journalist.  She was an active author for the separatist site ‘Halytsky Yastrub’ [‘Halychyna Hawk’] which published anti-Ukrainian material.

Now 61, Boiko (whose passport name is Vishchur) left Ukraine hurriedly in 2015, probably because of a fake separatist stunt on 17 July 2015 that she and Halytsky Yastrub were suspected of involvement in.  One of the side activities to Russia’s aggression against Ukraine from 2014 was a series of supposed ‘separatist protests’, aimed at presenting Ukraine as a hotbed of separatist movements (see examples here).  The stunt on 17 July 2015 was claimed, by Russian and pro-Russian media, to be a mass demonstration with banners demanding greater autonomy for Halychyna, or Western Ukraine.  There were, in fact, only around 20 people who stood there for 5 minutes, essentially long enough for the Russian state media cameramen to take photos which were presented on Russian TV as a 300-strong demonstration blocking one of the central streets in Lviv.  (See: ‘Separatism’ in Lviv – For Money and Russian Propaganda.).

Boiko first moved to occupied Donbas, then to Russia where she lived, without any official work permit from 2016.  She became a regular participant on television talk shows in Russia for her criticism of the Ukrainian authorities and strong support for the self-proclaimed and Russian-controlled ‘Donetsk and Luhansk people’s republics’  She also took part in broadcasts for the pro-militant ‘Our Novorossiya’ YouTube channel. Some of her appearances can be seen in the video here.

Boiko was detained on 10 December 2018 after neighbours complained about a drunken party at her Moscow flat.  Pro-Kremlin sources began shouting that she had disappeared, suggesting that she had been abducted by Ukraine’s Security Service [SBU].  It soon transpired, however, that it was the Russian authorities who had fined her for infringements of migration legislation and placed her in a detention unit, pending deportation.

Boiko claimed that she had asked for political asylum back in 2016, but had been turned down.  During the court hearing on 13 December 2018, she admitted breaching migration law, but asked not to be deported to Ukraine, because the SBU had initiated criminal proceedings against her on charges of encroaching upon Ukraine’s territorial integrity or treason. The Russian authorities would have been well-aware that the charges were linked with her aggressive propaganda for Russia’s proxy ‘republics’ in Donbas.  This is important given the Kremlin’s attempts to claim that Ukraine’s detention and criminal prosecution of Kyrylo Vyshynsky on more serious, but not dissimilar charges is political persecution. Vyshynsky was one of two prominent Ukrainian citizens, together with Volodymyr Tsemakh, MH17 witness (and possible suspect) who were handed over to Russia in exchange for 35 Ukrainian political prisoners, including filmmaker Oleg Sentsov and journalist Roman Sushchenko in September 2019.  He is now continuing his propaganda ‘work’ for Moscow in the Russian Federation.

Olena Boiko’s propaganda services were clearly less highly valued. Unfortunately  the YouTube link to the telephone interview she gave to a pro-Russian blogger as she was being deported to Ukraine now says that it is a private video.  In November 2019, you could hear her saying that she had been discarded “like a dirty used rag” and that “Russia doesn’t abandon its own, it simply spits them out”,