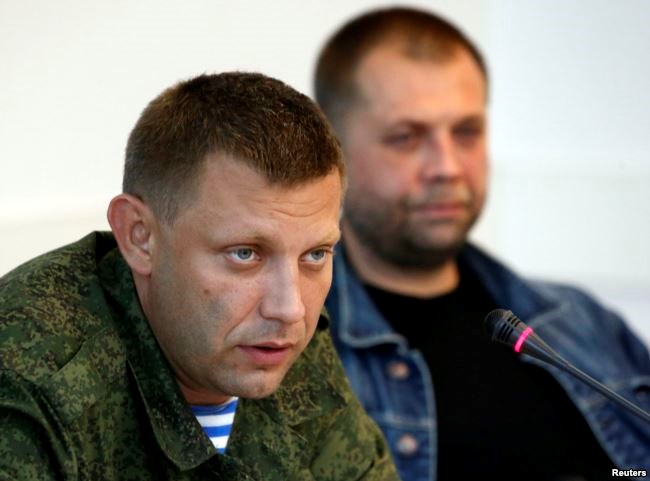 Igor Girkin, the ‘former’ Russian FSB officer who helped Russia seize Crimea and bring war to Donbas, has yet again overturned Russia’s narrative about the conflict in Ukraine.  In the latest of many interviews, Girkin has stated that it was Moscow that organized the killing of Alexander Zakharchenko, leader of the so-called ‘Donetsk people’s republic’ [DPR] on 31 August 2018.  In earlier outpourings, Girkin has made it quite clear that ‘Moscow’ or Russian President Vladimir Putin’s aide Vladislav Surkov personally “appointed” the alleged leaders of ‘DPR’ and its Luhansk counterpart, ‘LPR’.  He does not now specify who it was “from those in Moscow” that ordered Zakharchenko’s killing, but he clearly indicates that it was Moscow, and not Kyiv, as Russia and the militants themselves have persistently claimed. This is not the first time that Girkin has dismissed the claims that it was Ukraine that was behind Zakharchenko’s death, but back in January 2021, he suggested that Zakharchenko could have been killed “over commercial matters”.  He had created his own ‘army’ which he’d financed through (plundered) Donbas enterprises, with this “not having been agreed”.  The motivation is only slightly different as now Girkin indicates that Zakharchenko was not so easy to control, so “they put in” Denis Pushilin, a total non-entity, but one who clearly does what he is told.

What is abundantly clear here, and in the other interviews that Girkin provides so willingly, is that all the claims about these being ‘local leaders’, ‘elected’ by the so-called ‘republics’ are total fiction.  Nor is he alone in this.  Fellow Russian Aleksandr Borodai  recently became a Russian parliamentarian, but in 2014 was just as involved as Girkin in the illegal armed formation that Russia continues to claim is a ‘Ukrainian separatist-created republic’. He and Girkin hastily vacated their ‘posts’ and occupied Donbas in early August 2014, just weeks after a Russian BUK missile was brought from a Russian military site in Kursk and downed Malaysian passenger airliner MH17 over militant-occupied Ukraine. Girkin is currently on trial (in absentia) in the Netherlands over his believed role in the disaster.  In an interview following his election to Russia's State Duma, Borodai openly admitted that the Ukrainian Army in Donbas were confronting “Russian forces”.  He was also asked why he left Donbas in August 2014, and was equally blunt in his response, explaining that “the DPR government at that time was a rather strange spectacle”.  He listed all the Russians in what Russia was claiming to be a ‘Ukrainian civil war’, and acknowledged that this was “somewhat outrageous from the point of view of propaganda”.  Zakharchenko was needed primarily because he was a Ukrainian national.

It is standard to hear the response from those following events that all such revelations are “simply obvious”.  That, however, is no argument to bring before international courts, and it is also considerably less effective against Russia’s lavishly funded propaganda machine.  This, and the vocal contingent of pro-Russian politicians in Ukraine parroting Moscow’s narrative about a ‘civil war’, are compelling reasons for being grateful to Ukrainian journalist Denis Kazansky who closely follows all of these individuals and their convenient propensity for incriminating both themselves and Moscow.

There is one other reason since at very least one Ukrainian hostage, Oleksandr Pohorelov, was doubtless subjected to torture to get him to publicly ‘confess’ to involvement in the killing of Zakharchenko on the instructions of Ukraine’s Security Service. We know of other hostages similarly tortured over alleged involvement in many other killings of militants who had outlived their uses for Moscow.

While many of Girkin’s interviews are given to non-mainstream media, he has been equally open in at least one interview to the state-funded Russia Today in early 2021, Girkin made it quite clear that he was planning the invasion of Donbas long before Ukraine announced the so-called ‘Anti-Terrorist Operation’ or ATO.  Whoops:  Russia and state-controlled media like Russia Today, have constantly pushed the line that ‘separatists and Russian volunteers’ were simply forced to fight to defend Donbas against Ukrainian aggression.

None of such revelations have any impact on the propaganda narrative of the state media channel.  Nor, for that matter, do those of Borodai or Russian Nazi Alexander Zhuchkovsky, who seized Sloviansk together with Girkin.  Both Borodai and Zhuchkovsky have made it quite clear that the militants would have been defeated, probably dead, had it not been for the direct involvement of Moscow in the fighting.  Iin fact, such admissions have been made, and assiduously ignored by Russian state media, since 2014.  For example, in November 2014, Girkin told the far-right Russian Zavtra newspaper, that it was he who pressed the trigger that began the war and stated openly that “if our unit had not crossed the border, everything would have ended as it did in Kharkiv and in Odesa.”   This was confirmed, almost word for word, in January 2021 by one of the relatively few leading Ukrainian insurgents, Pavel Gubarev.

See also: Russian who brought war to Donbas admits it has turned into “a dump” worse than Ukraine or Russia