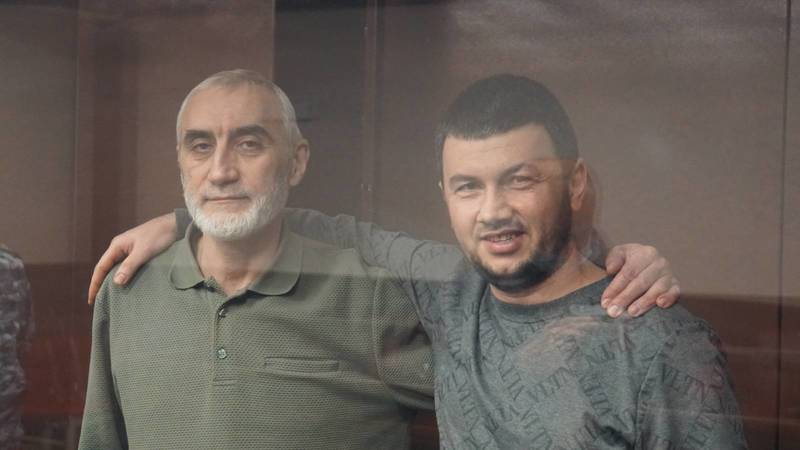 The ‘trial’ is underway at the Southern District Military Court in Rostov (Russia) Rostov (Russia) of two civic activists from Bakhchysarai facing 15-year sentences on preposterous ‘terrorism’ charges.  The latter are based on conversations about religion five years ago, and on the clearly suspect ‘testimony’ of two ‘anonymous witnesses’ whose identity and reasons for giving false testimony are well-known.

The proceedings against Oleh (Ali) Fedorov* and Ernest Ibragimov are essentially a remake of the internationally condemned trial of eight civic journalists and activists, seven of whom were, on 16 September 2020,  sentenced to terms of imprisonment from 13 to 19 years.  The appeals against these sentences are currently being heard.  All of the charges are based solely on unproven claims of involvement in Hizb ut-Tahrir, a peaceful transnational Muslim organization which is legal in Ukraine and most other countries.  In occupied Crimea, the Russian FSB are increasingly using such prosecutions as a weapon against civic activists and journalists, particularly those from the Crimean Solidarity initiative which is playing a vital role in providing information about human rights violations in occupied Crimea..

The ‘trial’ of Fedorov and Ibragimov is based, not only on the same flawed charges as those used against other Crimean Tatar civic activists, but also on the same falsified ‘evidence’.  There are conversations on religious subjects from 2016 and January 2017, of which the FSB have been aware since at least October 2017, when the earlier arrests began.  Despite the absurdity of ‘terrorism’ charges over religious discussions held five years ago, the FSB have pulled out the usual ‘linguistic’ assessments of the conversation, with FSB-loyal ‘experts’ claiming them to provide proof of involvement in Hizb ut-Tahrir.  The FSB also claimed that they ‘found’ religious literature during the armed searches.  In Fedorov’s case, the ‘prohibited’ literature was purportedly found in a bathroom, a place where no devout Muslim would leave religious texts.

Since both the ‘expert assessments’ of conversations about religion and the planted religious literature are a bit poor in themselves, the FSB invariably uses ‘secret’ or ‘anonymous’ witnesses whose ‘testimony’ cannot be verified.

One of these ‘witnesses’, under the pseudonym ‘Bekirov’, on 6 December 2021.  He claimed, in very vague terms, that he had visited secret meetings of Hizb ut-Tahrir  where both Fedorov and Ibragimov had been present and that the latter had supposedly told him that they were members of the organization.

Beyond this incriminating allegation, the ‘witness’ proved to suffer from a quite extraordinary degree of forgetfulness and was unable to answer virtually any of the questions put to him.  He ‘could not remember’ when he had last seen the defendants; why he had not reported the meetings to the FSB for so long after he claimed to have learned that they were members of Hizb ut-Tahrir.  Nor, he said, could he recall details of the meetings, where they had taken place; other participants; the Imam of the mosque, etc.

This ‘forgetfulness’ is particularly suspect, as the protocols of his ‘questioning’ by FSB investigators provided an extraordinary amount of detail: the meeting places; the names of all participants; the topics discussed; and even the hierarchy of the alleged members of Hizb ut-Tahrir.

Defence lawyer Taras Omelchenko also repeatedly pointed out to the court that he could hear somebody in a whisper prompting the ‘witness’ (whom the defendants cannot see).  He suspected that this person was FSB officer, Nikolai Artykbayev.  Presiding ‘judge’ Igor Vladimirovich Kostin, ignored this, as he has the suspiciously selective nature of ‘Bekirov’s’ memory and the lack of any reason for his identity to be concealed.

The man’s identity is, in fact, known, as well as the number of cases where the FSB have used him in trials of Crimean Tatars.  In court, Ibragimov recognized him by his manner of speech as Narzulayev Salakhutdin, a man who was living in occupied Crimea without the proper documents and who categorically did not want to be forcibly returned to his native Uzbekistan.  This very clearly gave the FSB leverage over him.

In early November, both Fedorov and Ibragimov under the pseudonym ‘Ismailov’, by his voice (and likely accent).  Ibragimov identified him in court, stating that he had known him as ‘Kostya the Latvian’, although he had also been known as Konstantin Alexeyev. (His real name appears to be Konstantin Tumarevich). The same individual had, he said, taken part in several trials as a secret witness, but there was no sense in retaining any secrecy since everybody knows who he is.  He added that they had known him from 2014 to 2016. “If we are really as terrible and socially dangerous, then why did he not demonstrate his civic position earlier, in 2016, when he stopped seeing us.  The trials of other Bakhchysarai groups have been based on his testimony. His lies shatter people’s fate”.

Here too, the court ignored the above and the vulnerable legal position that Tumarevich was in as a fugitive from justice in Latvia, without proper documents,  and refused to remove his ‘anonymity’.  The court, under Kostin, also paid no heed to the fact that this individual’s testimony under questioning differed in many respects from that earlier provided to the investigators.  In asking for the man’s identity to be revealed, lawyer Omelchenko pointed out that, since the alleged ‘witness’ had appeared in several cases, he had often claimed to be in different places at the same time.

In all such cases, the prosecutor opposes revealing the person’s identity, and sometimes even prompts the ‘secret witness’ when the latter becomes tongue-tied if asked why he wants to remain anonymous.  In this case, it was prosecutor Igor Nadolinsky, who insisted on secrecy for both ‘anonymous witnesses’ with this upheld by ‘judge’ Igor Kostin.

Despite the supposed ‘terrorism’ charges, the FSB and others who carried out the armed searches on 17 February 2021 did not even try to pretend that they were looking for anything except ‘prohibited literature’.   Six men were arrested that day, with all of them activists from Crimean Solidarity who attended political trials; organized parcels for political prisoners and helped the latter’s families.

Ernest Ibragimov  (b. 1980) is the third Crimean Tatar political prisoner who earlier worked (as chef) for the renowned Salachik Cultural and Ethnographic Café.  The café faced constant searches and harassment under Russian occupation and  in 2018.  Fellow chef, Remzi Memetov was arrested in May 2016, while the café’s founder and civic journalist, Marlen (Suleiman) Asanov was arrested in October 2017.  While taking part in flash-mobs, etc. in support of political prisoners, Ibragimov, who himself has four young children, was particularly active in the Crimean Childhood initiative.  The latter arose in response to the ever-mounting number of children whose fathers have been imprisoned on politically-motivated charges.  Following the arrests of Crimean Tatar Mejlis leader and human rights activist Nariman Dzhelyal; Asan and Aziz Akhtemov on 4 September, 195 children are growing up without their fathers.

The indictment against Fedorov and Ibragimov has been copy-pasted from that against Marlen Asanov and seven other Crimean Tatar civic journalists and activists.   Four civic journalists: Asanov; Ernes(t) Ametov; Timur Ibragimov and Seiran Saliyev were arrested in October 2017, together with two civic activists Memet Belyalov and Server Zekiryaev.  The offensive against those who reported on mounting repression and helped the victims became even more brazen on 21 May 2018 with the arrests of Crimean Solidarity coordinator and civic journalist Server Mustafayev and Edem Smailov.

Fedorov and Ibragimov have now been added to this ‘case’, with the charges and, seemingly, the ‘evidence’ identical.  Both are charged with ‘involvement in a Hizb ut-Tahrir  group’ under Article 205.5 § 2.  Like the other eight men, they are also accused (under Article 278) of ‘planning to violently seize power’.  No attempt is ever made to explain how men, arrested after armed searches that found no weapons of any sort or any evidence of plans to commit acts of violence are supposed to have intended to achieve such a seizure.

All of the men by the renowned (and persecuted) Memorial Human Rights Centre as political prisoners.