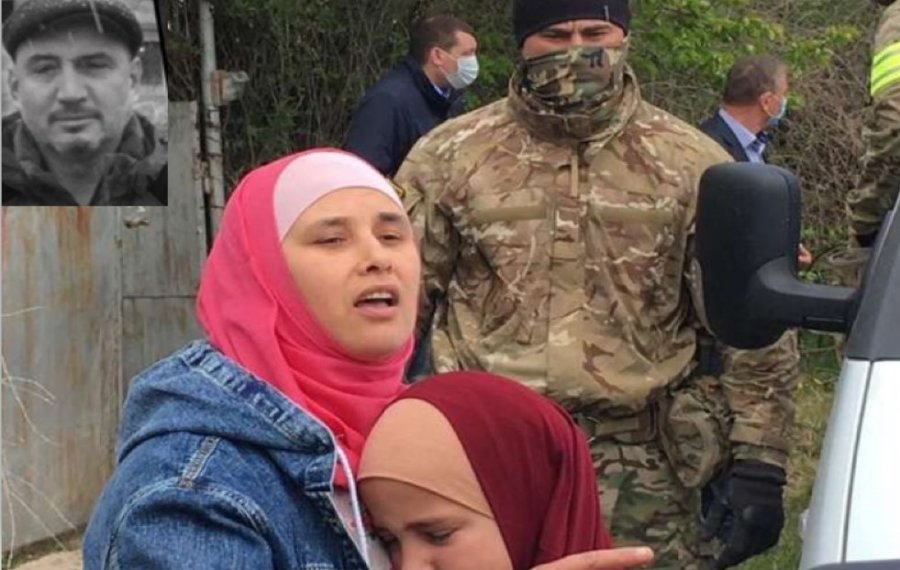 Russia has brought criminal charges against Nabi Rakhimov many months after its enforcement officers killed the Uzbek refugee, who was living peacefully in occupied Crimea with his wife and two underage children.  The FSB are claiming that Rakhimov “used force against representatives of the authorities carrying out their duties’ (Article 318 of Russia’s criminal code) and was killed in the confrontation.  There was, however, no reason for the armed operation against Rakhimov and his family, let alone for him to have shown any resistance against a large contingent of armed officers.

Two Crimean lawyers, Edem Semedlyaev and Siyar Panich, will be representing the defence in the case against Rakhimov, whose widow, Sokhima Burkhanova has insisted that her husband was innocent and is demanding an investigation into the circumstances around his death.  The case is at preliminary investigation stage with the lawyers currently reading the forensic assessments into the criminal case.  The problem is, however, that any criminal charges were laid after Rakhimov had been killed, and the Russian-controlled FSB, prosecutor and ‘courts’ in occupied Crimea have all refused to hand Rakhimov’s body over for burial.  The initial excuse for not returning the body was that the case was still ‘under investigation’.  A month and a half later, ‘senior investigator’ Alexei Vadimovich Skorin informed the lawyers representing the family that Rakhimov’s body was not being handed over in accordance with Article 14.1 of the Russian law on burials, etc.  This states that the bodies of people whose “criminal proceedings in connection with their participation in terrorist activities were terminated due to their death as a result of stopping the said terrorist actions” will not be returned.  There were no ‘terrorist activities’ and it seems extremely likely that the real reason is that the dead man’s body would give the lie to the FSB’s account of how he died.

Although for Rakhimov’s four children, especially the two youngest, 11-year-old Mariam and her 15-year-old brother Takiuddin, their lives were shattered on 11 May 2021 with the killing of Rakhimov and detention of their mother, the story has a crucial prelude.  Nabi Rakhimov had gone to Russia, fleeing religious persecution in his native Uzbekistan for alleged involvement in the peaceful transnational Muslim organization Hizb ut-Tahrir.  Russia reacted in 2013 by detaining him, pending forced deportation to Uzbekistan.  Helped by human rights lawyers, Rakhimov applied to the European Court of Human Rights which , in its judgement in the Case of Rakhimov v. Russia (which became final in December 2014, ruled that Russia’s had violated Rakhimov’s rights.  The Court also expressly prohibited Russia from extraditing him to Uzbekistan.

Russia had not previously flouted this prohibition, and there was no reason for Rakhimov to have believed that it would deport him from Russian-occupied Crimea.  Russia is using a profoundly flawed Supreme Court ruling from 2003 which claimed Hizb ut-Tahrir  (which is legal in Ukraine) to be ‘terrorist’ as a weapon of persecution with 15-20 year sentences brought against Crimean and Russian Muslims.  Yes, the Russian FSB could have been arriving to arrest Rakhimov on Hizb ut-Tahrir charges.  It is, however, only Russian propaganda media and the FSB who treat such arrests as seizures of ‘terrorists’.  Russia has arrested over 80 Crimean Tatar or other Ukrainian Muslims, with not one of the armed searches and arrests having met with any resistance at all.

There is quite simply no reason to believe that Rakhimov, a devout Muslim awaiting the end of the Holy Month of Ramadan, would have attempted any violent resistance.

At about 6 a.m. on 11 May 2021, armed officers burst into the house where Rakhimov’s wife and two school-age children were living.  They do not appear to have produced any warrant, and illegally refused (as always) to allow the lawyers who swiftly arrived to be present. Sokhiba Burkhanova was taken away, first to the migration service, then for questioning, with her 15-year-old son Takiuddin insisting on going with her.

Tragically, Rakhimov was alone in the house in a neighbouring village that he was building to earn money for the family.  There had reportedly been signs of surveillance and the FSB were doubtless aware that they would find Rakhimov alone. Had Rakhimov really died of gunshot wounds, there would be no reason for the secrecy and refusal to allow the religious burial of a man against whom criminal proceedings were first mentioned only after his violent death.

Sokhiba Burkhanova learned that her husband was dead only when an officer pushed a photo in front of her and demanded that she recognize the man they had killed. A Russian-controlled ‘court’ then ordered her detention in a migrant unit in Krasnodar (Russia), pending forced deportation to Uzbekistan. On 27 May, the European Court of Human Rights applied Rule 39, preventing Russia from forcibly sending Burkhanova to Uzbekistan where she too would face persecution.  Russia is complying to the extent that it has not deported here, however the Russian-controlled ‘High Court’ in Crimea on 28 May rejected her appeal, and she remains effectively imprisoned in the appalling conditions of the Krasnodar holding unit for so-called illegal migrants.