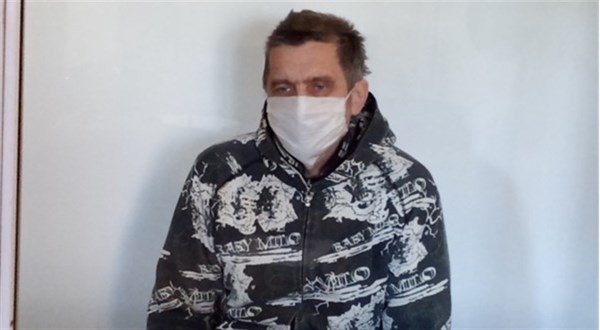 A court in the Donetsk oblast has sentenced Viktor Mykhed to 11 years’ imprisonment for involvement in the torture of Ukrainian prisoners of war in Donbas and in a terrorist organization.  Mykhed (nom de guerre ‘Yozhyk’ [Ёжик]) is believed to have been part of the gang of notorious militant Igor Bezler (or, ‘Bes’, ‘Demon’] in Horlivka and, as a member of the gang’s special ‘Communications’ unit, to have been an accomplice to the interrogations and torture of Ukrainian POWs and civilian hostages, including mock executions. He was accused of having, as ‘sound operator’, videoed the ‘interrogations’ and torture, and of having circulated propaganda material ‘for the self-proclaimed, but Russian-controlled ‘Donetsk people’s republic’ [‘DPR].  The sentence passed on 15 December 2021 by Judge Natalia Dyomina from the Sloviansk City and District Court is still subject to appeal.

The report from the Donetsk Regional Prosecutor’s Office did not mention Mykhed’s name, but referred to him as Bezler’s “henchman” and said that he was 55 and a resident of Mariupol.  It stated that the court in Sloviansk had found him guilty of taking part in a terrorist organization; being an accomplice to crimes; and of violating the laws and practice of war, specifically through the ill-treatment of POWs and civilian hostages (Articles 258-3 § 1; 27 § 5 and 438 § 1, respectively, of Ukraine’s Criminal Code).  The prosecution had provided evidence that, from June 2014 through January 2015, Mykhed had been a member of the Bezler gang’s ‘Communications’ unit in Horlivka. He had videoed so-called ‘interrogations’, edited them and then circulated these for propaganda to the militants and Russian propaganda media . Mykhed had not simply passively videoed the proceedings.  The prosecution also demonstrated that he had, while brandishing a weapon, forced POWs and civilian hostages to clean up the traces of torture.

Mykhed denied any part in torture, but did admit that he knew Bezler and had provided him with ‘services’, including by making videos.  He asserted that this was done gratis, because he supported ‘DPR’.  Graty reports that Mykhed claimed in court that he had voluntarily given testimony to Ukraine’s Security Service [SBU] in exchange for release from criminal prosecution.  Most reports suggest that he was arrested in Mariupol in May 2020.  He had been living there before he joined the militants and returned there in 2015, because of the (often fatal) battles for power between different militant gangs.

One of those who gave testimony in court was Vasyl Budyk, former Advisor to Ukraine’s Deputy Minister of Offence.  Budyk was taken hostage by Bezler’s gang in May 2014 and says that a harrowing militant video entitled ‘Bes executed two Ukrainian officers and put an ultimatum to the Kyiv authorities  18+’, which demonstrates a mock execution, was produced by Mykhed.

Although Igor Bezler, or Bes, was born in Simferopol in 1965, he is described by Bellingcat as a Russian citizen with ties to Russian Military Intelligence [GRU] and now living in occupied Crimea.  He was notorious, even among the militants themselves, for his personal brutality and that of his men.  There has also been the suggestion, mainly on the basis of an SBU-intercepted call, that he  and his men were involved in the downing of Malaysian airliner MH17 over occupied Donbas.  In fact, in March 2020, in explaining why they had chosen three Russians ‘formerly’ linked to Russia’s GRU or FSB and one Ukrainian, the Dutch Prosecutor stated that they had found nothing to indicate that the phone call had contributed to the downing of MH17.  They went on to say that “we did not, and as things currently stand in the investigation still do not, consider that there is a provable criminal case against Bezler in relation to flight MH17.”