Court in Russia inadvertently reveals the huge number of Russian military forces deployed in Donbas New United Russia party MP confirms that the fighting in Donbas is by “Russian forces”’ Ex-Donbas militant leader who wants Russia to seize most of Ukraine elected to Russian parliament Ruling party in Russia openly admits plan to annex Donbas Russia tricks residents of occupied Donbas into voting in its ‘elections’ in new aggression against Ukraine Putin’s Russian passport aggression against Ukraine fizzles in occupied DonbasRussian proxy Donetsk ‘republic’ tries to eliminate use of Ukrainian passportsEU is preparing to refuse recognition of Russian passports illegally issued to Donbas residentsPutin extends Russian attack on Ukraine, offering passports to all Ukrainians in DonbasUkraine will only help Russia by stripping Donbas residents who take Russian citizenship of their pensionsPutin offers Russian passports in occupied Donbas in new act of aggression against UkraineTortured to death for defending Ukraine. The first war crimes Russia brought to DonbasDonbas ‘separatism’: Myth, statistics and heavily armed Russian spetsnazRussian fighter calling for the destruction of Ukraine details military role played by Russia in DonbasNavalny to debate with Russian Crimea & Donbas war criminal for nationalist votesTortured to Death for Defending Ukraine’s Flag and Ukrainian UnityRussian war crimes in Ukraine are of interest, Mr TillersonRussia’s weapons of Ukraine’s destruction were not "found in Donbas mines"Putin gives military award to Russian soldier for Donbas battleKremlin-backed militant leader claims ‘right’ to shell his own cities
• Topics / Terrorism
• Topics / Army 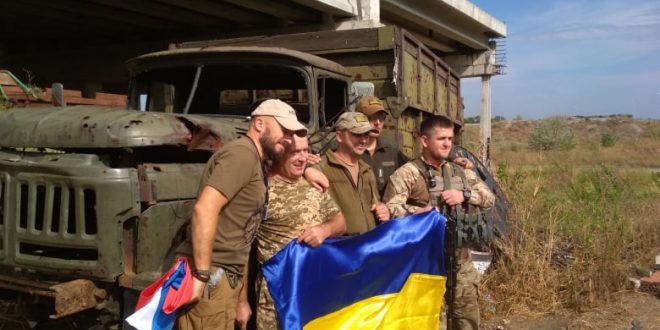 A third of Ukrainians questioned in a nationwide survey have said that they would take up arms against a new Russian incursion into Ukrainian territory, while over a fifth (21.7%) expressed willingness to demonstrate civil resistance. It is to be hoped that Russian President Vladimir Putin and his cronies pay heed to such results.  While resistance from the Ukrainian Armed Forces and ordinary Ukrainians might not be sufficient to withstand a mounted invasion, it would significantly increase the cost in lives of Russian soldiers.

The survey was carried out over the telephone by the reputable Kyiv International Institute of Sociology (KIIS) from 3-11 December 2021, amid Russia’s massive military presence near Ukraine’s borders and aggressive rhetoric and propaganda in the Russian state media.  While as much as possible a representative survey, it could not be carried out in occupied Crimea or in the Russian proxy ‘Donetsk and Luhansk republics’ [L-DPR].

Respondents were asked what actions they were willing to resort to “in the event of Russian armed intervention in their area.”

50.2% overall were willing to show resistance, with 33.3% speaking of armed resistance, and 21.7% of civic protests and demonstrations of opposition, including strikes, civil disobedience.  The numbers were significantly higher in the west of Ukraine, than in the east (with the central and southern oblasts in the middle), but even in the east, 25.6% said they would be willing to show armed resistance, and 16.8% - resistance in other ways.  Of the overall results, 14.8% said that they would move to a safer region of Ukraine; 9.3% - that they would move abroad; and 18.6% - that they would do nothing.  The others either didn’t know or (in 1.1% of the cases) refused to answer.

If Moscow hoped that demonstrations of force would cower Ukrainians, they certainly appear to have been proven wrong.  The percentage of Ukrainians willing to take up arms in December 2021 against the aggressor has increased fairly significantly since an analogous survey in September 2015 (from 23.8% to 33.3%).  In 2015, more Ukrainians said they would be ready to show civil resistance (28.6%) with this making the overall percentage slightly higher, at 52.4%.

KIIS also broke down the results in terms of political affiliation.  While a lower percentage of readiness to show resistance was to be expected from those supporting the pro-Russian ‘Opposition Platform – For Life’, it is interesting that a quarter of these respondents were willing to show either armed (14.3%) or civil (11.6%) resistance.  It was the European Solidarity party (of former President Petro Poroshenko) whose followers seemed most willing to show resistance (72.2%) with Servant of the People, the majority party associated with serving President Volodymyr Zelensky, at 53.2%.  Curiously, supporters of former Prime Minister and presidential candidate, Yulia Tymoshenko were lower still, at 42.4%.

While Russia is openly lying about its invasion of Crimea and trying to present the events of February and March 2014 as bloodless, with the armed soldiers without insignia even referred to as ‘polite people’, Ukraine’s Armed Forces were in a dire condition at the time, and casualties would probably have been very high had Ukraine tried to show armed resistance.

In Donbas, Russia’s attempts to use local pro-Russian activists, like Pavel Gubarev, to lead ‘people’s uprisings’ fizzled.  Moscow then deployed many of the highly-trained Russian fighters, like ‘former’ FSB officer Igor Girkin, who played a major role in seizing power in Crimea, to take Sloviansk . There are strong grounds for believing that the Kremlin was assuming that Donbas, and probably the Kharkiv and Odesa oblasts (at least) would also, one way or another, fall under Russian occupation or control.  Thanks initially to Ukrainian volunteers, and then to the significantly strengthened Ukrainian Armed Forces, this proved a serious miscalculation, and Russia needed to use significant contingents of military personnel from at least August 2014 to maintain its control of parts of Donbas. Judging by the KIIS findings, the cost of any further invasion will be even higher.