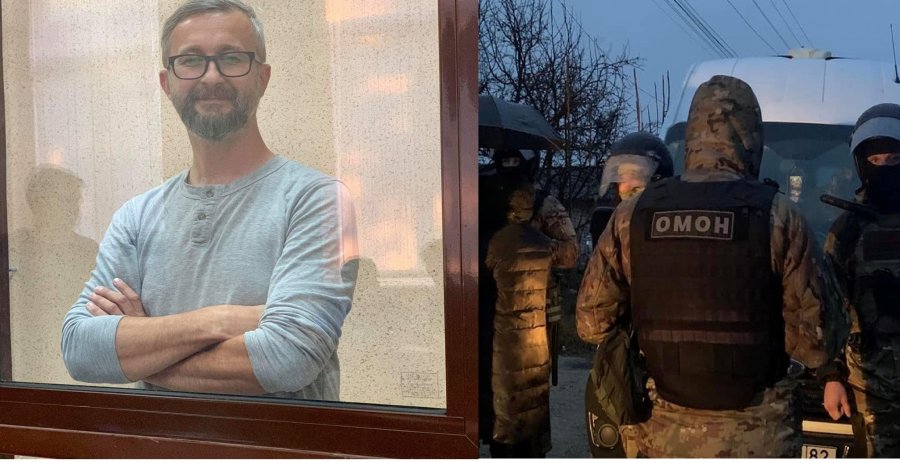 At least two Crimean Tatars were seized by the FSB in Russian-occupied Crimea last week after early morning armed ‘searches’ of their homes.  Both Kurtumer Chalgozov and Nariman Ametov were, purportedly, interrogated as witnesses or over possible involvement in the alleged act of sabotage that Russia is using to imprison renowned Crimean Tatar Mejlis leader Nariman Dzhelyal.  The only grounds would appear to be that they too are Crimean Tatars and Ametov has shown support for political prisoners.  It is, however, increasingly the case in Russian-occupied Crimea that no more is required, with the FSB using such methods either to torture out false testimony or as a form of terror, reminding Crimean Tatars that nobody is safe.

Kurtumer Chalgozov is a young man from Feodosia, who lives with his parents and younger siblings.  He was taken away by the armed men, in handcuffs and blindfolded.  His phone was immediately removed, and he was unable to call a lawyer or his family. He simply disappeared for many hours before being released in the early evening.  He had supposedly been taken for interrogation about the alleged attempt to blow up a gas pipe in Perevalne on 23 August, although why was entirely unclear.  Chalgozov does not know either Dzhelyal, nor the two other Crimean Tatars – Asan Akhtemov and his cousin Aziz Akhtemov, and says he has no idea why he was targeted.

News of another armed search appeared very early on Friday morning, 17 December.  Nariman Ametov, is a 33-year-old father of three from Stary Krym who has responded to the mounting repression in occupied Crimea by visiting political trials, including those of Crimean Tatars taking place in Rostov (Russia) and taking part in flash-mobs in support of political prisoners.

The search of the family home began at 5.30 a.m. and lasted three hours, with nobody allowed near the home.  It only became clear later that Ametov himself had been secretly taken away, via the backyard, at around 6.30.  Once again, it was only in the evening that Ametov was finally released.

According to Lutfiye Zudiyeva, others have also been detained, though some do not wish to speak about it publicly.  She commented that “in the case of Crimean Tatar politician Nariman Dzhelyal and the Akhtemov cousins, the investigators have left a huge window for so-called search and operational measures and investigative activities by the Crimean / Russian security service.  This window in the material is called “individuals not identified by the investigators” and a separate criminal investigation with respect to them.”

Zudiyeva stresses that demoralization and intimidation are not the least of the motives behind such measures, and that it is important to ensure publicity for each such occasion.

While she writes also that those who are innocent have nothing to fear, it is this which seems rather theoretical after eight years of Russian occupation.  Russia is holding well over 100 Crimean Tatar and other Ukrainian political prisoners with the charges in all cases profoundly flawed, and in many, including the charges against Dzhelyal and the Akhtemovs, openly fabricated.

In the present case, there is no real evidence even to confirm the claims of an act of sabotage on 23 August, while Dzhelyal was meeting with high-ranking representatives of 45 countries at the inaugural meeting in Kyiv of the Crimea Platform.

While it is possible that something really did happen to the gas pipe on 23 August, as reported that day, there is no way of proving that this was an act of sabotage.  The report on that day suggested that “the mechanical damage to the gas pipe had, possibly, arisen as the result of illegal actions by unidentified individuals”, but the criminal investigation launched was under Article 167 § 2 of Russia’s criminal code (‘deliberate destruction or damage to property’.  Dzhelyal’s lawyers, Nikolai Polozov and Emine Avamileva, have seen a photo, supposedly from the ‘scene of the crime’, however Polozov says that you cannot tell from this what happened to the gas pipe.  There is no way of verifying any of the claims since the gas pipe is on the territory of a military town controlled by the Russian military.

Russia had reacted with hysteria to the inauguration of the important Crimea Platform international initiative, and had openly threatened retaliation, including against Dzhelyal who was one of several leaders of the Mejlis, or self-governing body, of the Crimean Tatar people, to take part.  Following previous repressive measures, Dzhelyal was also the only one still living in Crimea, and he was permanently aware that he could be arrested at any moment, and essentially on any charges.

The arrest came less than two weeks after the Crimea Platform’s inauguration.   Dzhelyal was the last of five Crimean Tatars to disappear after being taken away by the FSB on 3 or 4 September, with nothing known of their whereabouts until late on 4 September.  Two of the three men seized during the night from 3-4 September  – Asan Akhtemov and his cousin, Aziz Akthemov were only finally able to see proper lawyers almost ten days later, after the European Court of Human Rights [ECHR] intervened.  They immediately retracted the supposed ‘confessions’ that were shown making on FSB videos, and described the torture used to extract them.

It is probably significant that the recent disappearances of men in FSB custody are essentially nothing new.  Eldar Odamanov was taken away after an armed search early on 3 September, while Shevket Useinov was the third man, together with the two Akhtemovs, to face an armed raid / search in the middle of the night between 3 and 4 September.  Both simply disappeared, and it was only late on 4 September that their whereabouts and those of the other three were confirmed.  Both were, however, held incommunicado until 5 September, before being jailed for 10 and 15 days on absurd charges, quite unrelated to the armed raids on their homes.

There is ample evidence of the torture methods used by the FSB, with these including the attachment of electric currents to particularly sensitive parts of the body, including the genitals. We also know from victims what kind of ‘testimony’ was demanded of them in exchange for an end to such excruciating pain.

As in essentially all of Russia’s politically motivated prosecutions of Crimean Tatars and other Ukrainians, there is at least one ‘anonymous witness’ in this case whose ‘testimony’ cannot in any way be verified.

Nariman Dzhelyal; Asan and Aziz Akhtemov have been imprisoned since 4 September.  The charges against all of them have become increasingly more severe, carrying sentences of up to 20 years.  At least the first escalation in the charges against Asan Akhtemov came immediately after he gave a detailed account of the torture used.

Polozov notes that when you read the indictment and similar documents, it is impossible not to recall the material used during Stalin’s Terror of the 1930s.  The defence is now reading the limited ‘case material’ and believe that the indictment could be passed to the prosecutor’s office before the end of 2021.