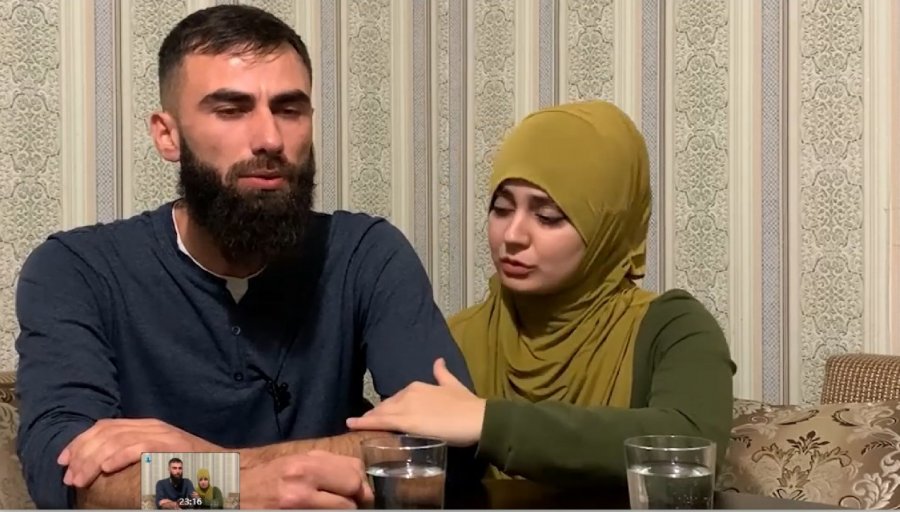 Four days after Nariman Ametov was taken from his home in handcuffs and with a bag over his head, the young Crimean Tatar father has publicly spoken of the torture he endured during the following hours.  While impossible to independently verify the allegations, they correspond to those of others seized in similar circumstances, as well as to the methods already demonstrated by the FSB in fabricating a ‘terrorism plot’ to imprison renowned Crimean Tatar Mejlis leader Nariman Dzhelyal.

Ametov was very clearly in a state of immense distress, as he spoke both about the physical torture and about the threats of reprisals, including an effective death threat,  if he told anybody about his experiences.

With his wife by his side, he spoke first of how men in masks and with machine guns had burst into their home in Stary Krym at around 6 a.m. on 17 December and had forced him to the ground. He explains how he was secretly taken away, with a bag over his head, while the armed ‘search’ was still underway.

He was taken outside the city, and into some basement, where they initially took the bag off his head, said that he was suspected of involvement in the alleged damage to a gas pipe in Perevalne, and demanded that he “tell them everything” and undergo a lie detector test.  Ametov said that he would answer any questions but refused to undergo such a test, saying that he did not trust it, that they would accuse him of crimes he had not committed.  He was told that he would do so, had the bag put back over his head and left for what he estimates to have been around 30 minutes.  When the men returned, he demanded to see a lawyer and reiterated his refusal, saying he had the right to refuse to take such a text.  In response, he heard: “Here, you have no rights”.  A man who identified himself only as ‘Maksym’ told him that he is the person who “loosens people’s tongues” and said that he had come to Crimea “to crush the likes of you”.  He told Ametov, clearly using foul language, that he would force him to say whatever, and that he could do whatever he wanted without suffering any consequences.

He was attached to the table with scotch tape, after which they sent electric currents through his body.  He soon shouted for them to stop, saying that he would take the test as demanded, but was told that it was now they who decided when he would take it.  Instead, the torture continued. Although he was then forced to do this supposed lie detector test, it seems likely that the real aim was the documents which, under torture, he signed.  One of these was a collaboration agreement.  His torturers threatened that if he revealed anything about his experiences, they would first make sure that this document was made public.  Then later, they added, he would “unofficially disappear”.  There have been a number of enforced disappearance since Russia’s invasion and annexation of Crimea, and this is not a threat that any young father would take lightly.  He says, however, that they should have killed him then, as he will not remain silent.

Ametov’s courageous refusal to be cowered has only confirmed suspicions about the methods the FSB have been using since the ‘arrests’ cum abductions of five men on 3 and 4 September 2021.  It was clear that the target was Nariman Dzhelyal, with the fact that he had been in Kyv, at the Crimea Platform, no obstacle in accusing him of a supposed act of sabotage that same day (23 August).  Two of the other men were held incommunicado for ten days and only provided with access to lawyers after the European Court of Human Rights intervened.  During that period both Asan Akhtemov and his cousin Aziz Akhtemov gave videoed ‘confessions’ which they retracted as soon as they were able to see independent lawyers.  Both have also described the torture used to get these ‘confessions’, with their account similar to that now given by Ametov. After being effectively abducted, and held incommunicado for three days, the other two men - Eldar Odamanov and Shevket Useinov were jailed for 10 and 15 days on absurd charges, quite unrelated to the armed raids on their homes.

Nariman Ametov is one of two men, together with Kurtumer Chalgozov) whose effective disappearance for almost an entire day after early morning armed searches were widely reported.  According to Crimean Solidarity coordinator Lutfiye Zudiyeva, there are others who are trying to avoid any publicity.  Unfortunately, evidence available of the methods used by the FSB, and the threats made against men themselves and their families make it seem likely that the FSB are either forcing men into acting as their so-called ‘secret witnesses’ or torturing them into signing documents that can later be used to put pressure on them.  All of this is while the men are held incommunicado, without access to independent lawyers, and, very often with the use of methods of torture so agonizing that few, if any, can hold out for long.

As reported, there is no real evidence that an act of sabotage was actually carried out on 23 August this year (the day of the Crimea Platform).  There is absolutely nothing to link the damage to a gas pipe with Nariman Dzhelyal, nor with Asan and Aziz Akhtemov, with doubts about the accusation only confirmed by the fact that the Akhtemovs were held for so long without any contact with lawyers.

The three Crimean Tatars have been imprisoned since 4 September, with the charges against them all becoming increasingly more severe.  On 15 December, one of Dzhelyal’s lawyers, Nikolai Polozov reported that the ‘investigation’ was complete and that the final charges had been formally laid against Dzhelyal.  Most are those already reported, namely: carrying out an act of sabotage as part of an organized group (Article 281 § 2a); purchase, transfer or possession of explosives as part of an organized group (Article 222.1 § 4; smuggling an explosive device, as part of an organized group (Article 226.1 § 1.  They have now added ‘causing considerable material damage to the Crimean gas network (to the tune of around 1,425 USD).  Polozov says they are also claiming that (the alleged) cut in gas to the military unit that supposedly ensued constituted “an attack on the Russian Federation’s defence capabilities”.  Polozov added that, when you read the indictment and similar documents, it is impossible not to recall the material used during Stalin’s Terror of the 1930s.