Prominent US political scientist Francis Fukuyama has written a powerful letter* expressing admiration and support for imprisoned Crimean Tatar journalist Osman Arifmemetov.  Such statements are particularly important since Russia is not only using grotesque ‘terrorism’ charges as a weapon against Crimean Tatar journalists and civic activists, but is also claiming that those who speak out in their defence are ‘justifying terrorism’.  Fukuyama’s letter makes it abundantly clear that he is speaking out in support of courageous journalists who have refused to remain silent about repression in occupied Crimea, and have paid a terrible price for their bravery.

Fukuyama begins by describing Ukraine as the frontline state in the global struggle between liberal democracy and kleptocratic authoritarianism, and then writes: “The situation in Crimea has been an integral part of that fight. Journalists like yourself have been essential in preserving truth as Russia continues to cloud the media sphere with disinformation. Without your bravery and commitment, we would know much less about the real situation on the ground in Crimea and the repressions Russia has levied against the population.  You were one of the first citizen journalists to bring this situation to light in 2015.

Because of your courageous reporting, we know of the detention and imprisonment of Belyal Adilov and Timur Ibrahimov, two of your fellow journalists, and it is shameful that the security services have imprisoned you in a similar manner. And yet this has not stopped you from writing. Your refusal to be silent in the face of Russian repression is inspiring to those of us watching.”

Fukuyama also recognizes the cost to Osman’s wife and children and ends with the words: “Thank you for your service to the truth through your journalism and your role in Ukraine’s fight for freedom. We in the West are hoping for your freedom as soon as possible.”

Osman Arifmemetov is a maths and information science teacher and programmer by profession,, and a young father (of Fatima, b. 2015 and Mustafa b. 2017)  He had, indeed, devoted a huge amount of time since 2015 to ensuring coverage of the armed searches and arrests; FSB torture; political trials and other repression that Russia has unleashed on his homeland.  Russia has systematically crushed the independent media in Crimea, and the role of such ‘citizen journalists’, and of the civic initiative Crimean Solidarity in general, cannot be overstated. Russia has reacted with typical brutality and Arifmemetov is now one of ten Crimean Tatar civic journalists who have either received or are facing up to 19-year sentences.

Like most Crimean Solidarity civic journalists and activists, Arifmemetov had earlier suffered less serious repressive measures for his activism.  On 21 February 2017, he was one of 10 activists jailed for five days merely for standing and streaming information onto the Internet about the armed search of the home of Marlen Mustafaev.

On 29 March 2017, Bilyal Adilov was seized by masked men in camouflage gear from outside the Russian-controlled High Court in Simferopol, while reading a prayer for the release of political prisoners.  It was Arifmemetov, who immediately went live on Facebook, showing a video of the men abducting Adilov.  According to Arifmemetov’s Crimean Solidarity colleague Lutfiye Zudiyeva, it was the wide coverage that the videoed abduction received in the Ukrainian media that helped them to understand that they could use direct broadcasts on Facebook to inform people about what was happening in Crimea.  This was clearly not to Russia’s liking.

Now 36, Arifmemetov and 24 other Crimean Tatars have been imprisoned since Russia’s internationally condemned attack on journalists and activists on 27 March 2019 (or shortly afterwards).  All were charged with ‘involvement’ in the peaceful transnational Hizb ut-Tahrir  organization which is legal in Ukraine.  Russia and, since 2016, the equally repressive Uzbekistan, are the only countries in the world to have declared Hizb ut-Tahrir  ‘terrorist’, and no explanation has ever been provided.  Nor are any of the men accused of recognizable crimes, although they face sentences of 15-20 years or more.

Some of the men are accused of ‘organizing a Hizb ut-Tahrir group’ under Article 205.5 § 1 of Russia’s criminal code, the others, including Arifmemetov, with involvement in such an alleged group (Article 205.5 § 2).  All 25 men have also been charged (under Article 278) with  “planning a violent seizure of power and change in Russia’s constitutional order”, something they could only have hoped to do through their words, as no weapons of any sort were found, nor any proof of such plans.

The men have all been imprisoned since their arrest, and are now on ‘trial’ at the Southern District Military Court in Rostov which has been passing huge sentences on Crimean Tatar and other Ukrainian political prisoners since the ‘trial’ of Ukrainian filmmaker Oleg Sentsov in 2015.

Probably due to the international attention and condemnation of such a brazen attack on Crimean Tatar civic journalists and activists, Russia decided to divide the men up and hold five identical ‘trials’.  Arifmemetov is on trial together with two other civic journalists – Ruslan Suleimanov and Rustem Sheikhaliev, as well as two civic activists Enver Ametov and Yashar Muyedinov.  The panel of judges is Viacheslav Korsakov (presiding); Denis Galkin and Igor Shendrikov.

In real terms, there is none.  The men are charged in connection with illicitly taped discussions back in 2016 about religion, politics and Russia’s persecution of believer.  These were passed to pseudo ‘experts’ who can be trusted to provide the assessments demanded by the prosecution. There are also several ‘secret witnesses’ whose testimony cannot be verified, and whose identity remains concealed, despite the lack of any evidence that they have reason to feel in danger.

Osman is a talented writer who has already received at least one literary award for his writing from prison.

See: Crimean Tatar journalist faces 15-year sentence for ‘planning to overthrow the Russian regime’ with book on being alone with God

Please write to Osman Arifmemetov and, if possible, to some of the other men!

* The letter was posted by lawyers Emil Kurbedinov and Alexei Ladin 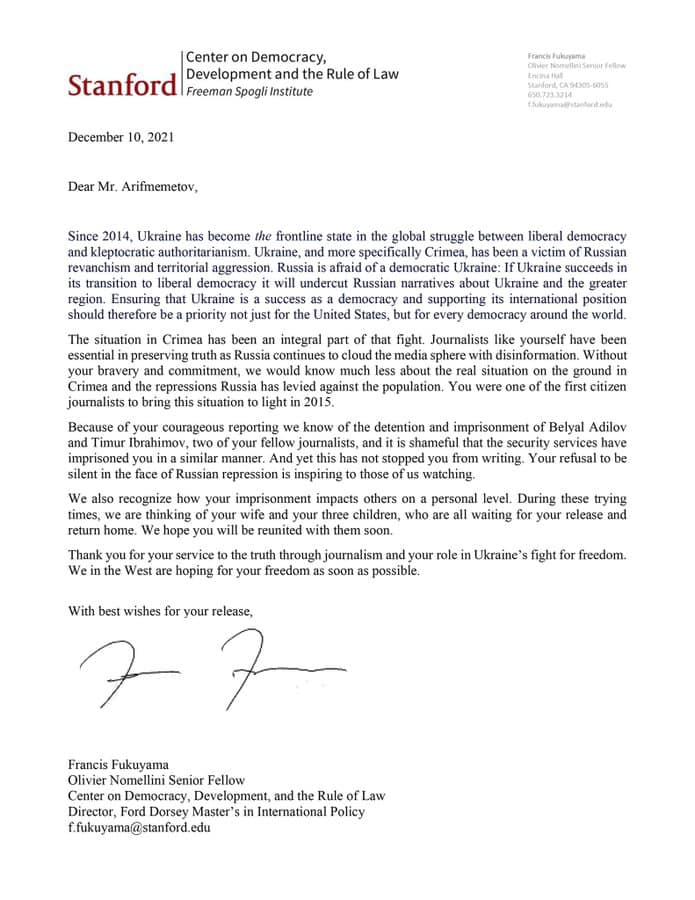