“Memorial” cannot be closed – it is the need to know the truth about the tragic past: statement of the Ukrainian human rights organizations 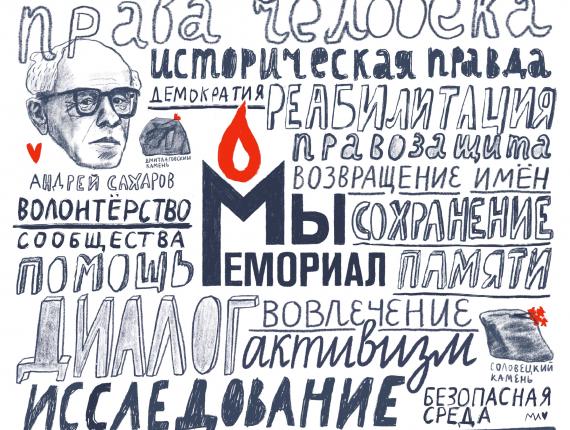 On 28 December the Supreme Court of RF liquidated the international society “Memorial”. Russian Prosecutor General’s Office accused the human rights organization of “systemic violations of the law on foreign agents”, which consisted in the absence of appropriate labelling. And although the “Memorial” has paid all the fines already, it was punished again, and how! According to the court decision, the International Memorial Society and all its branches are to be closed. The funny thing about this decision is that the “branches” of the company are French, Czech and Ukrainian without the status of a legal entity outside the jurisdiction of the Russian Federation, and therefore it can not apply to them at all. Another branch in Perm region has the status of a legal entity. The other members of the society are not branches, they are independent legal entities in Germany, Italy, Belgium, four organizations in Ukraine (Odesa, Mariupol and Mykolayiv Memorial Society and Kharkiv Human Rights Protection Group) and 32 legal entities in various regions of Russia. That is, legally, this decision does not apply to the regional Russian companies of “Memorial”. But, knowing the practice of Russian law enforcement, this can be seen as a hunting signal for local authorities.

The trial has clearly shown that the problem is not in the labelling of the foreign agent. During the debate, prosecutor Oleksiy Zhafyarov said that “instead of remembering the glorious past the Memorial makes one repent of the Soviet past” and “justifies Nazi criminals” (although three Nazi aides in Lithuania who were included in the database of victims of political repression which has more than 3 million political prisoners is a minor mistake for such a large array of information, which is due to the inability to verify information in the Russian archives). In addition, according to the Russian Prosecutor General's Office, the human rights organization “speculates on political repression, distorts historical memory, including the Great Patriotic War, and creates a false image of the USSR as a terrorist state”. “Someone pays” for this, said Zhafyarov.

On 29 December Moscow city court closed the Memorial Human Rights Centre – for those same reasons. The judge announced the decision in 10 seconds, and 30 minutes were enough to adopt it.

So, the real reason for closing the Memorial’s organizations is that the Russian state, according to the Russian authorities, is beyond criticism! According to the organization’s statement, the court’s decisions “reaffirmed that the history of political terror organized and directed by the state authorities remains not an academic topic for Russia, which is of interest only to specialists, but an acute problem of our time. Our country needs an honest and conscientious understanding of the Soviet past; this is the key to its future. It is ridiculous to believe that the judicial liquidation of the International Memorial will remove this issue from the agenda. The whole of Russian society needs to remember the tragedies of the past. And not only the Russian: the memory of state terror unites all former Soviet republics”. We would like to add: not only Soviet, but all countries of the world which suffered from the communist regime of the USSR. In the Gulag there were Germans, Poles, French, Czechs, Hungarians, Bulgarians, Serbs, Americans, Japanese…

The court’s decision in a month will be appealed in cassation, while “Memorial” is still working. Yesterday, the European Court of Human Rights ruled in accordance with Rule 39 of the Rules of Court: execution of decisions to liquidate the International Memorial and the Memorial Human Rights Centre must be suspended pending a ruling on the appeal of 2013 made by 11 Russian organizations on human rights violations caused by the law on “foreign agents”.

In this letter, we express our solidarity with our Russian friends, with whom we have spent more than 30 years helping former Gulag prisoners, former Ostarbeiters, researching state terror, burying its victims, defending human rights, helping refugees, and in recent years opposing Russian aggression in Crimea and Donbas, conducting joint field missions to document war crimes, and defending “Kremlin prisoners” and other Russian political prisoners. Undoubtedly, the International Memorial with its members in 7 countries will find legal forms to continue its activities. The Memorial is not an organization, not even a public movement, it is first of all the need of people to know the truth about their tragic past, about the fate of their parents and grandparents. Memory cannot be eliminated.

The statement is open for signing and distribution. You can sign the statement through the field below.

Association of Jewish Organizations and Communities "Vaad" of Ukraine

Congress of the national communities of Ukraine

NGO “The Group of Influence”