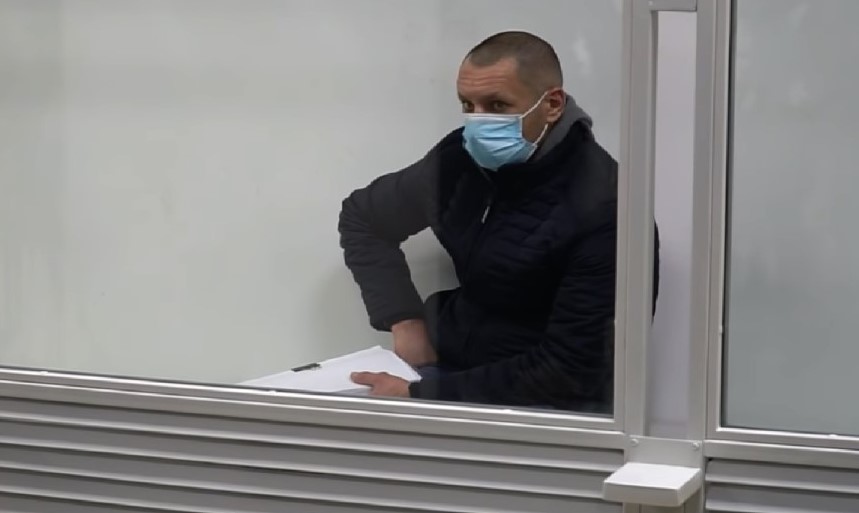 It appears very likely that Denis Kulikovsky (‘Palych’) whose arrest in Kyiv was announced by Ukraine’s Security Service, or SBU, on 9 November 2021, had been collaborating with the SBU since 2019. A new study, carried out by Radio Svoboda, in cooperation with Bellingcat,  has provided further confirmation of the suspicion that the former commandant of the notorious Izolyatsia secret prison in militant-occupied Donetsk would not have been arrested by the SBU on 9 November 2021 had it not been for the actions of a former hostage and Izolyatsia torture victim, Stanislav Aseyev.  The study leaves serious questions unanswered, including how a person suspected of overseeing and, sometimes, taking part in savage torture, rape and even killings of hostages should have been at liberty, living quietly in Kyiv

As reported, Kulikovsky was detained in the early hours of 9 November. The SBU announcement, stated that the individual, who was not named, had “organized and directly participated in murders and the torture of illegally imprisoned Ukrainian citizens.”  Four charges were initially mentioned:  human trafficking (Article 149 of Ukraine’s Criminal Code); the formation of a terrorist group or organization (Article 258-3); formation of militarized or armed formations not envisaged by law (Article 260); and violations of the laws and practice of war (Article 438).

During the hearing on 10 November at the Prymorsky District Court in Mariupol, Kulkovsky stated that he had been living in Kyiv since early 2019.  The Radio Svoboda report has added detail to initial information provided by Aseyev and Christo Grozev from Bellingcat during a talk show on 12 November which made it clear how their actions had prompted Kulikovsky’s arrest.

Aseyev explained to Radio Svoboda that a case against Izolyatsia torturers had been passed to the court, and he had noticed that the list of suspects did not include Kulikovsky, whom Aseyev says was the main butcher.  Aseyev phoned the police to ask how there could have been such an omission.  He was informed that Kulikovsky could not, like the others, be tried in absentia, as he was in government-controlled Ukraine.  He had crossed the border into Ukraine from Russia on 23 April 2019, they said.

Aseyev immediately phoned Grozev, given Bellingcat’s involvement in a study on Izolyatsia.  Within a day, Grozev had been able to confirm this and to put Aseyev in contact with former SBU officers who had earlier been involved in the operation regarding Kulikovsky. They confirmed that for some time they had used Kulikovsky “for operational purposes”.

Aseyev asked the police to help in catching Kulikovsky, but says that the SBU learned of what was happening, and caught him themselves.  Since this is their field, they presumably understood that it would look very odd if their role was undertaken by the police.

The Izolyatsia Art and Culture Centre in Donetsk was seized by militants from the self-proclaimed and Russian-controlled ‘Donetsk people’s republic’ [DPR] in June 2014 and turned into a secret prison which former hostages refer to as a concentration camp.  On 12 November, the SBU published what it called some elements of Kulikovsky’s ‘testimony’.  During the five minutes, Kulikovsky describes what he did at Izolyatsia, answering for ‘security’ until December 2014, after which he became the head.  He said that his role had been to “extract, so to speak, truthful testimony” and described the methods of torture applied, the role of the person hostages called ‘Doctor’ or Doc, but whom Kulikovsky named as Stanislav Simonov, in both taking part in torture and reviving people if the torture went too far.  He also stated that during every so-called ‘interrogation’, there were Russian FSB officers present, as well as those from the so-called ‘DPR ministry of state security’.  In a separate scene, he stated that FSB officers mainly worked with ‘handler’ Vasily Viktorovych Yevdokimov, known as ‘Lenin’.

Officially Kulikovsky was removed in January 2018 for excessive brutality, although former hostages believe it was due to financial conflict with Yevdokimov. Kulikovsky was imprisoned himself for several months and, according to former hostages, was himself tortured.  He was then taken away somewhere, though, according to ex-hostages, he was occasionally brought back to Izolyatsia where he again took part in torturing people.

He then fled to Russia, however returned on 23 April 2019 where he was awaited by the SBU. Grozev says that, according to preliminary information, he did actually help [the SBU] .  In fact, if Grozev’s information is correct, he may have crossed into Russia “to find one of the key individuals guilty of a grave crime in the context of Izolyatsia, and in the context of the occupation.”

Grozev does not name this individual, but Radio Svoboda goes on to mention that the SBU believe Yevdokimov was responsible for organizing the killing of SBU colonel Oleksandr Kharaberyush and HUR [Military Intelligence] colonel Maxim Shapoval.  In January 2020, operational transcripts were leaked to the Ukrainian newspaper Obozrevatel, with these of conversations between Kulikovsky and Yevdokimov.  Radio Svoboda stresses that these were clearly not intercepted calls from Kulikovsky’s side, but calls which he was making, presumably with SBU present.

Radio Svoboda’s informant – a now former SBU officer – says that from the autumn of 2019 the SBU ended any surveillance over Kulikovsky who was effectively left at liberty. If, at the beginning, this could have made sense to prevent the militants and FSB from realizing that Kulikovsky was cooperating with the SBU, that surely ceased to be the case after the leaked telephone conversations from the beginning of 2020.

This is despite the fact that Kulikovsky is also suspected of extremely grave crimes. Aseyev said of Kulikovsky’s five-minute admission of guilt that the former militant had only spoken of a tiny fraction of the crimes he should answer for.

The SBU immediately denied having reached any deal with Kulikovsky, and, in response to questions from Radio Svoboda, replied that there were no grounds for talking of any kind of protection for the former militant. They said that this was a top secret operation which only a few people knew about.

At least officially, the circle of those in the know did not include the Prosecutor General’s Office [PGO] which told Radio Svoboda in August 2020 that they could not provide any information about the individual, except that there was a lot of witness testimony against him from former hostages.  In December 2020, Kulikovsky was informed in his absence that he was suspected of crimes, with a representative of the PGO’s Department overseeing criminal proceedings linked with the armed conflict suggesting that any proceedings had to be in absentia, since neither the militants, nor Russia would hand Kulikovsky over.  At that stage he had been in Kyiv for over 18 months.

Aseyev earlier pointed out that Kulikovsky had every reason to feel safer in government-controlled Ukraine.  This was reiterated by Grozev who notes that those who have provided information to the other side are likely to be first in line for ‘neutralization’, i.e. elimination, by the Russian security service.

Although it was only after Kulikovsky’s arrest and first revelations, including about the role of Russia’s FSB, that the ‘DPR’ announced that he had been declared on the wanted list for murder and state treason, it seems inconceivable that Russia, which closely monitors all Ukrainian media, were not aware of the January 2020 conversations.  Radio Svoboda’s question can really only be reiterated - why was Kulikovsky not arrested then?

Deals may well be acceptable if important information or collaboration is involved, but surely the slate could not, and should not, be wiped clean?  When, had it not been for Aseyev’s determination, would the SBU have re-arrested Kulikovsky?