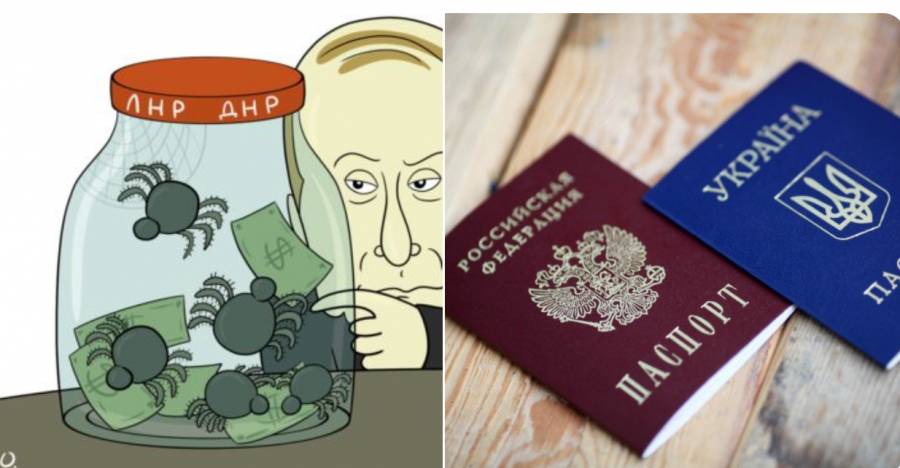 Russian President Vladimir Putin has tabled a new draft law on Russian citizenship which, rather menacingly, envisages ‘change of the state border of the Russian Federation’ as grounds for obtaining Russian citizenship.  Media and social media supporting the Russian-controlled Donbas militants clearly view this as a step towards Russia’s recognition of the so-called ‘Donetsk and Luhansk people’s republics’ [D-LPR] and / or open Russian annexation.  The new bill comes at a time when Russia’s military escalation on Ukraine’s border and warmongering propaganda are raising concerns that Moscow is planning to invade more of Ukraine’s territory.

The present law’s Article 12 essentially refers only to citizenship by birth (of the person, or of his/her parents).  Once the bill tabled on 29 December 2021 is passed by the State Duma, and there are no grounds for doubting that a bill proposed by Putin will be adopted, Article 12 will broaden the grounds for obtaining Russian citizenship.  Most contentious is, of course, Item 4, namely “as the result of the choice of RF citizenship given a change to the border of the Russian Federation”. A change to any country’s border must be recognized by other countries, and Crimea and Donbas remain internationally acknowledged parts of Ukraine’s territory.  Since its invasion and annexation in 2014, Russia has made it all but impossible to live in occupied Crimea without accepting Russian citizenship.  It has, since 2019, been trying to increase the number of Ukrainians in Donbas with Russian citizenship.  The present bill will extend the list of categories of people who can get citizenship according to simpler procedure.  It will also broaden the president’s power to determine who gets citizenship “not only for humanitarian, but also for any other purposes”.  A telling omission is that the bill does not envisage investors and qualified specialists being able to obtain Russian citizenship.  The explanatory note states that the relevant passages of the still current federal law on citizenship had proven to not be required in practice.

There is a further disturbing aspect to this law, namely the broadened scope for depriving people of their citizenship if they have been convicted of various ‘crimes’.  Judging by the very large number of Ukrainian political prisoners, especially Crimean Tatars and others from occupied Crimea, unwarrantedly convicted of so-called ‘terrorism’ charges for unproven involvement in a peaceful organization (Hizb ut-Tahrir) which is legal in Ukraine, or ‘spying’ charges, there are doubtless very many such political prisoners in the Russian Federation as well.  There is, unfortunately, no reason for assuming that a Ukrainian political prisoner, stripped of his / her Russian citizenship, would be more likely to be freed and able to return to mainland Ukraine.

Russia has been illegally occupying Crimea since 2014 and is now on the point of depriving Ukrainians of their property in Crimea.  It has been trying to artificially pump up the number of supposed ‘Russian citizens’ in the parts of Donbas under its control since Putin’s first decree on 24 April 2019.  That made it easier for residents of the so-called Donetsk and Luhansk ‘republics’ to get Russian citizenship.  There had been rumours in the Russian media that this was planned, with these accompanied by comments about how successful such mass issue of passports had been in the Georgian regions of South Ossetia and Abkhazia.  Novaya Gazeta journalist Pavel Kanygin noted at the time that Moscow was making its threat to the newly elected Ukrainian President Volodymyr Zelensky quite clear.  If his administration didn’t accept Moscow’s terms for taking back the so-called ‘republics’, they could end up with millions of Russian citizens whom Russia would then claim it was entitled ‘to protect’.  Putin issued a second decree on 17 July 2019, this time making it possible for all Ukrainians in the Donetsk and Luhansk oblasts (Donbas) to receive Russian citizenship according to ‘simplified procedure’, even if they live on Ukrainian government controlled territory.  Both moves were condemned by the international community, with the EU, for example, calling Russia’s actions “an encroachment on Ukraine’s sovereignty” and in breach of the Minsk Agreement. On 10 October 2019, the EU stated that it did not recognize Russian passports issued in occupied Donbas, and that they were issuing guidelines to member states on how to recognize such documents and not recognize them.   There have been further steps since then, aimed at encouraging Ukrainians to take Russian citizenship and effectively forcing or deceiving them into taking part in Russia’s elections.

All of these moves are acts of aggression, taken in the full knowledge that Ukraine does not permit dual citizenship.  They have, however, already been taken, with this new bill not, in principle, adding anything to the ease with which Russia hands out passports.  It is, however, an ominous new act of aggression and of bluster, since none of these purported “changes of Russia’s state borders” will be recognized by the international community, however many ‘laws’ Putin pushes through Russia’s puppet ‘parliament’.