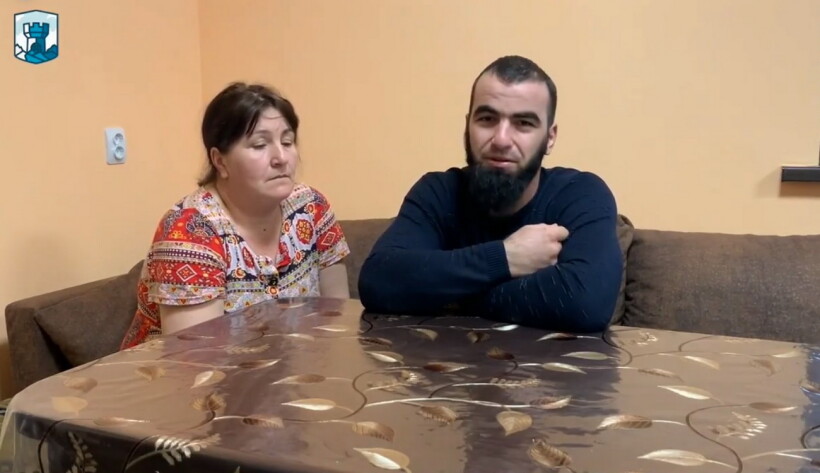 Kurtumer Chalgozov and his mother Screenshot from the Crimean Solidarity video

Kurtumer Chalgozov, the 23-year-old Crimean Tatar seized by FSB officers on 14 December, has publicly revealed details about his treatment that day and the methods used to get him to sign an agreement to collaborate with the FSB.  While none of this can be independently corroborated, Chalgozov’s account is similar to that recently given by Nariman Ametov and both men will be well aware of the danger they face by angering Russia’s FSB.

They came for Chalgozov in the early morning of 14 December.  He still lives at home with his parents and small sister, and was still asleep when they turned up.  Awoken by loud noises, he came out to find his father forced to the floor with his arms twisted behind his back.  He instinctively tried to help his father, but was himself forced to stand, face to the wall, and was handcuffed before being taken away.  This was, supposedly, a search, however the only item they appear to have been interested in was Chalgozov’s mobile phone.  They put opaque glasses on him before driving him away, and he says that they seemed to be trying to confuse him as to the direction they were driving.

His account of the basement premises that he was taken to is extremely similar to that given by Ametov.  Unlike the latter, he does not seem to have been tortured with electric shocks, though they did tape him to the table with scotch tape in the same way.  Ametov had initially resisted the men’s demands that he undergo a so-called ‘lie detector test’, with the torture inflicted until he agreed.  Judging by Chalgozov’s account, the FSB concentrated on threatening him with a fabricated criminal prosecution for sexual molestation of a minor and massive sentence. In the light of the methods used to imprison renowned Russian historian of the Terror Yury Dmitriev, it is worth noting the open cynicism demonstrated by the FSB in assuring Chalgozov that they would organize everything, including falsified ‘evidence’ in order to get him imprisoned.

He was told: “You have 10 minutes, think.  Either your life changes for the worse and you’ll go to prison, or you work with us and will live as you have up till now. Everything will be fine.  <>  Under such pressure, and tied by scotch to the table, they forced me to accept those conditions and I signed.”

Although the threats continued if he didn’t keep his mouth shut about this ‘agreement’, the FSB men’s behaviour changed after he signed their paper, with them even promising him ‘help’, if needed, and offering him food.  They spoke of him needing a pseudonym, so possibly part of such ‘collaboration’ is acting as one of the ‘anonymous witnesses’ whom Russia uses for its political trials of Crimean Tatars and other Ukrainian political prisoners.

They drove him close to his home in Prymorske (Feodosia region), but let him out early, so that he was not seen being given a lift by the FSB.  Chalgozov is no civic activist, but he was aware of people being seized by the FSB.  He ends by saying that you hear conversations about how it’s better to be quiet and agree to everything.  Then you go out, he says, and have to decide whether to say nothing and act as an informer, or speak out, and tell your people about the unlawful methods used by the FSB.  He took the courageous path as, on 23 December, had Nariman Ametov.

The initial response to Ametov’s shaking account of what he had endured was a huge wave of solidarity from other Crimean Tatars, several hundred of whom gathered outside his home to show their support. Neither that, nor the lack of any reaction from those who held and tortured him, can be taken as meaning that he is safe from FSB reprisals and the same applies now to Chalgozov.

It has, essentially, been clear since 3-4 September 2021 and the arrest of Crimean Tatar Mejlis leader and well-known journalist Nariman Dzhelyal and four other Crimean Tatars, just how the FSB are fabricating its preposterous ‘sabotage’ charges against Dzhelyal and two young men – Asan Akhtemov and his cousin Aziz Akhtemov.  As reported, there is no real evidence that there even was an act of sabotage, and there is absolutely nothing to link Dzhelyal or the Akhtemovs with it.

It is therefore of immense concern that five Crimean Tatars were effectively abducted on 3-4 September.  Eldar Odamanov was taken away after an armed search early on 3 September, while Shevket Useinov was the third man, together with the two Akhtemovs, to face an armed raid / search in the middle of the night between 3 and 4 September.  They came for Dzhelyal early on 4 September.

Asan Akhtemov and his cousin, Aziz Akthemov were held incommunicado for many days, and only finally able to see proper lawyers over a week later, after the European Court of Human Rights [ECHR] intervened.  Both have given chilling accounts of the torture they suffered, including electric shocks, beatings and threatened execution. Odamanov and Useinov were held incommunicado until 5 September, before being jailed for 10 and 15 days on absurd charges, quite unrelated to the armed raids on their homes.

Kurtumer Chalgozov and Nariman Ametov have now both revealed the torture and / or threats used to try to force them into helping the FSB fabricate criminal cases against other Crimean Tatars.  There have been others in the past, such as Renat Paralamov, who did the same. Another Crimean Tatar, Ruslan Bekirov, who found the courage in court to retract testimony and speak of the FSB torture used to extract it, ended up on trial over this.

Following the disappearances for entire days of Chalgozov and Ametov, Crimean Solidarity coordinator Lutfiye Zudiyeva reported that others had faced similar experiences but did not wish to speak about them publicly.

Dzhelyal’s lawyer Nikolai Polozov has confirmed that the charges against Dzhelyal and the Akhtemovs essentially hinge on so-called secret witnesses.  It is tragically clear how Russia is obtaining such ‘testimony’.