Czech authorities arrest Russian paramilitary awarded by Kremlin for role in annexation of Crimea Czech Republic passes record 21-year sentence for terrorism in militant-controlled Ukraine Czech Republic sentences Donbas fighter to 20 years on terrorism charges Czech gets 15 years on terrorism charges for fighting for Russian-controlled Donbas militantsCzech gets 3-year sentence for fighting in Donbas on side of Russian-controlled militantsLatvian resident sentenced to five years for Russian-paid fighting in DonbasRussian propaganda chief Kiselyov gets his nephew jailed in Germany for involvement in war in UkraineCzech national charged with terrorism after fighting for Russian-backed militants in UkraineBriton jailed on terrorism charges for fighting with Russia-backed militants in UkraineBriton charged with terrorism for involvement with Kremlin-backed militants in DonbasNot in Our Name: Journalist NGOs Should Condemn Propagandist Graham Phillips’ Torture StuntMaimed Ukrainian Hostage Finally Exchanged by Kremlin-Backed MilitantsKremlin-backed militants to put maimed and tortured hostage on ‘trial’Tortured Ukrainian ‘Sentenced’ by Kremlin-backed militants to 30 yearsDonbas militants could sentence Ukrainian hostages to death for ’spying’Kremlin-backed Donbas militants threaten to execute Ukrainian prisonersPraised on Russian radio for war crimes in Crimea & DonbasSloviansk torture, killings, execution orders, yet still no proper investigationFamilies of murdered hostages demand proper investigationMurdered in Slovyansk
• Topics / Terrorism 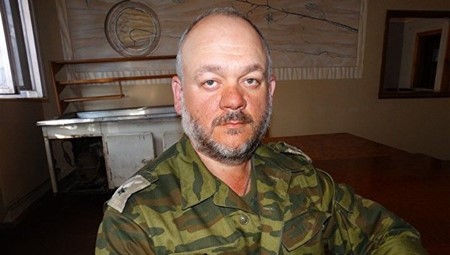 Martin Sukup Photo by Aleksandr Chalenko for the Ukraina.ru interview

The Municipal Court in Prague 49-year-old Czech national Martin Sukup to 21 years’ imprisonment for his very active role on the side of the Russian / Russian-controlled militants in Donbas. The sentence was passed in absentia, but Sukup, who is probably in the so-called ‘Donetsk people’s republic’ [DPR] had appointed a lawyer who denied the charges, and immediately lodged an appeal against the sentence. The Czech Republic has initiated over 20 prosecutions against men who fought on the side of the militants in Donbas, and, most importantly, is clearly classifying such activities as terrorism.

In passing sentence on 4 January 2022, presiding Judge Silvie Slepičková said that there was no doubt that Sukup had gone to Ukraine and joined what she termed separatist groups. This was amply proven by witness statements; by Sukup’s own boasting on social networks, for example about medals for the so-called ‘liberation of Donbas’; by photos as well as by media articles. He is believed to have held various positions in the so-called ‘DPR military’, including as a tank driver and the commander of a tank unit, from June 2014 to at least May 2018.  The prosecution added that he had fought in the battles for Kramatorsk and Horlivka, in which around a thousand Ukrainian soldiers had been killed.  Such active participation fell within the definition of a terrorist attack, public prosecutor Marek Bodlák said.

All of this was denied by Sukup’s lawyer Klára Tvrdá who asserted that her client could have just gone to Donbas “to begin a new life” after the break-up of his family and a prosecution for insurance fraud.  She asserted that the charges were based on newspaper articles and Sukup’s statements on social networks, and that the latter could have been “exaggerations” or written by somebody else.

It remains to be seen what the court of appeal will think of these arguments.  It is certainly difficult to dismiss something as merely a media report if the said publication is , who tells the Russian-based propaganda site Ukraina.ru about his part in the fighting.  In , Sukup is with another militant, not with a member of his apparently new family, with both men in camouflage gear.

The term of imprisonment stipulated in the Criminal Code is 12 to 20 years, however, in handing down a 21-year sentence, Judge Slepičková said that the court had taken into consideration Sukup’s abuse of the command skills he had obtained while in the Czech army, as well as the fact that he took part in the fighting much more actively than others who were charged in similar cases.

Radio Svoboda that the Czech Republic is leading all other countries in prosecuting those who fight on the side of the illegal armed formations in Donbas.  There are over 20 cases which are either now under investigation or have already resulted in a sentence.  Not all of the latter have been passed in absentia. .

As reported, on 22 July 2021, the High Court in Prague significantly increased the sentence passed on Alexei Fadeyev [in Czech: Alexej Fadějev] a 42-year-old Belarusian, currently serving a separate sentence, for fighting on the side of the Russian-led militants in Donbas.  The High Court agreed with the Public Prosecutor that Fadeyev  was guilty of terrorism and increased the original four and a half year sentence  to 21 years.  This is of particular importance as the first court had found him guilty of taking part in a criminal gang and had disputed the legal qualification of the crime as an act of terrorism.

On 8 September 2021, 27-year-old Lukáš Nováček to 20 years’ imprisonment, also on terrorism charges. He was accused of having gone to occupied Donbas in July 2015 and taken part in training, intelligence and fighting against the Ukrainian Armed Forces until February 2016 .  Nováček admitted having been in Donbas and lived among the militants, but denied fighting, asserting that he had gone to occupied Donbas to be with ‘Natasha’, a woman he claimed to have met on social media.  He maintained that he had refused to join the ‘Novorossiya army’, and had instead, most implausibly, been allowed to work in the kitchen.

In Nováček’s case, like Sukup’s, he incriminated himself, with photos and videos from his mobile phone which show him in fighting gear and carrying a weapon.  Like Sukup, he can be heard on one of the videos repeating ‘Russian World’ narratives to Russian propagandists.  On this occasion, he says that he came to Donbas because he wanted to fight “Ukrainian fascists”.

Nováček’s appeal against the sentence is due next week.

In September 2021, the Czech authorities, seemingly in cooperation with Ukraine, arrested Aleksandr Franchetti, a former Russian paramilitary who played a significant role in Russia’s invasion and annexation of Crimea.