Donbas hostages tortured for a Russian propaganda program against Ukraine Mother with grave health issues imprisoned by Russian-controlled militants for trying to save her sonUkrainians tortured and imprisoned in Donbas for supporting Ukraine, with Russia blocking their release Elderly Donetsk hostage with hip fracture sentenced to 17 years for supporting Ukraine Russian-controlled militants sentence 70-year-old pensioner to 17 years for ‘spying’ after torturing him and his familyRussian proxy Donbas ‘republic’ threatens death sentence after torturing young father into ‘confessing’ to being a Ukrainian saboteur Kherson journalist, imprisoned by the Russians, tells of killing, rape and torture of hostages Former child hostage spends 7th birthday in Russian captivity for wanting to live in free Ukraine Russia uses Kherson ‘evacuation’ for enforced disappearance of more Ukrainian hostages and POWs ‘Guilty’ of being Ukrainian: Teacher abducted by the Russian invaders and held incommunicado for six months Silence abets Russia in torturing and risking the lives of Ukrainian hostages and POWs in occupied DonbasAbducted 16-year-old was forced to clean up after Russian invaders" torture of Ukrainian POWs and hostagesRussia abducts 25 volunteers delivering humanitarian aid to Mariupol, threatens to put them ‘on trial’ Russia extends terror and abductions from occupied Crimea and Donbas to all of Ukraine Russian invaders torture and threaten to kill civilian hostage in revenge for their military losses Ukrainian POWs and abducted civilian hostages illegally imprisoned in Russian-occupied Crimea Russian invaders abduct Mayor of Prymorsk Oleksandr Koshelevych after first taking his elderly father hostage Russian Rule of Lawlessness in Occupied Crimea and DonbasRussian invaders take Mariupol intensive care hospital and its patients hostage Russia kills Minsk Agreement, with lives of over 300 Ukrainian hostages and POWs in danger
• Topics / The right to liberty and security 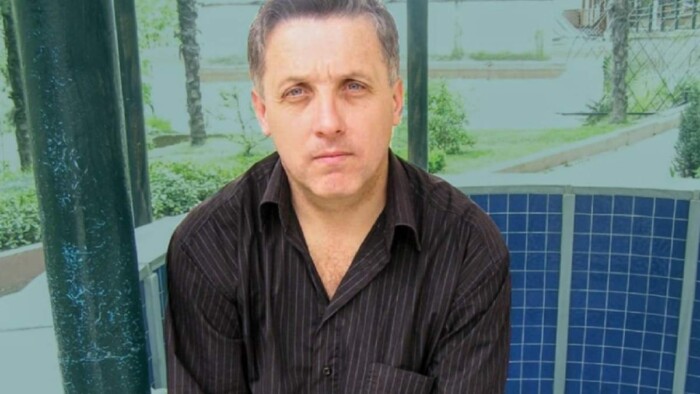 Volodymyr Cherkas vanished in September 2017 after returning to occupied Donetsk for his elderly mother, who was quite alone after the death of her husband.  It was only much later, after the release of fellow hostages  in the December 2019 exchange, that Volodymyr’s family learned a little more about his seizure and treatment by militants from the self-proclaimed and Russian-controlled ‘Donetsk people’s republic’ [‘DPR’].  Although it remains unclear where he is now, he was held and doubtless savagely tortured at the notorious Izolyatsia secret people in Donetsk for over two years, and there are very real concerns about his state of health, since Cherkas has a heart condition and is receiving no medical treatment.

According to Volodymyr’s daughter, Marina Schiffer, it was only after freed hostages were able to confirm that they had seen her father that he was added to the official Ukrainian list of hostages.  Until then, Marina knew nothing, and has still not had any contact with her father since the ‘DPR’ militants are continuing to deny that he is in their custody.

Cherkas was involved in business in Donetsk until the war began in 2014.  He had never concealed his pro-Ukrainian position.  Marina explains that her grandfather died in the summer of 2017 and that her father returned for the funeral and to persuade his mother to leave.  He was able to get out of occupied Donbas then, but arranged that he would return for his mother at the end of the summer.  The last call Marina received from her father was on 6 September after he had crossed the checkpoint into occupied Donbas.  He said then that everything was OK, and that he was heading to her grandmother, as planned, and that they would gradually get everything sorted, pack and leave.  That was the last she heard, although for a few days the family was not especially worried, assuming that he was simply very busy.

Marina has been active in campaigning for all hostages, and says that she has spoken with many relatives of people who were enticed to occupied Donbas in order to appropriate their cars, take them hostage and demand a ransom. Her father’s case is, however, different in that he simply disappeared. His mother reported him missing and even spoke with representatives of the so-called ‘DPR ombudswoman’, but without any result.

The family managed to hire a lawyer who told them that Cherkas ‘was under investigation’ but could not get access to the ‘investigators’, nor to information about the charges.

It is from former hostages that they learned that Cherkas was seized together with a group of people, and that they were accused of sabotage and of ‘spying’ for Ukraine’s SBU [Security Service].  Marina has said that she has no idea who the other people were, nor how her father could have been with them.  She assumes that they were together by chance, as her father has three underage children in Kyiv, and would not have involved himself in anything dangerous.

The family does not even know whether an unrecognized ‘court’ has convicted him of spying, or whether he is still awaiting ‘trial’.  It is, unfortunately, near certain that Cherkas was tortured since the last confirmed sighting of him was in the notorious Izolyatsia secret prison in Donetsk where hostages are subjected to horrific forms of torture, including electric currents attached to fingers, earlobes or even genitals.   Those who saw Cherkas have told Marina that he might have been moved to the prison colony in Makiyivka where a large number of Ukrainian hostages are held, however she stresses that this cannot be confirmed.

Oleksandr Timofeyev was with Cherkas at Izolyatsia and told the Media Initiative for Human Rights how Cherkas had always tried to support the others.  He was, like the others, beaten and ill-treated by the militants and it is Timofeyev’s account that gives the most reason for acute concern.

“After the torture, his condition worsened”, Timofeyev says, “problems emerged with his heart and with blood pressure. I once saw how Volodymyr became unwell and could scarcely stay on his feet from the pain in his chest. No medical help was provided”.

There are known to be at least 300 Ukrainian hostages and prisoners of war in occupied Donbas, although the real figure is likely to be much higher.  Aside from a very small and rather strange exchange of prisoners in April 2020, there have been no exchanges since the end of December 2019.  Obstruction and attempts by the militants to make releases of hostages contingent on political concessions are almost certainly on orders from Moscow.  Volodymyr Cherkas is one of very many hostages, both men and women, whose health and, very likely, life is being thus placed in jeopardy.