Crucial testimony confirms doubts about child murder that sparked anti-Roma riots in Ukraine Ukraine to answer before ECHR over arrest that sparked anti-Roma riots Torture, ignored alibi and likely evidence-rigging in murder that triggered Loshchynivka anti-Roma riots Five years in detention despite an alibi for the murder that sparked Loshchynivka anti-Roma riots Alibi confirmed of man whose arrest for a child’s murder triggered appalling anti-Roma riots‘More doubts than evidence’ in child murder case that triggered shocking Loshchynivka anti-Roma riotLoshchynivka child murder – mounting evidence that case against Roma man was falsifiedThe arrest for a child’s murder that sparked anti-Roma riots in Ukraine may be based on faked DNA evidenceShocking riots against Roma in Odesa oblast sparked by arrest of a man with an alibiPolice, who watched on as homes were destroyed by Loschchynivka mob, now deny there were riotsMurder trial but no probe into police inaction during anti-Roma pogrom in LoshchynivkaUkrainian prosecutor refuses to investigate police inaction during shocking anti-Roma pogromTerrifying Precedent Set by Authorities’ Response to Violent Anti-Roma PogromVermin, filth and cold in Russia’s torture of imprisoned Crimean Tatar journalists and activists Ukrainians in imminent danger of losing their land and homes in Russian-occupied Crimea Crimean Tatar veteran’s civic journalist son sentenced to 16 years by Russia on same charges as Stalin used against her grandfather Obstacles to Registration and Citizenship Confirmation Threaten to Create a New Wave of Statelessness in Ukraine: A Preliminary Legal AnalysisПерешкоди для реєстрації та підтвердження громадянства створюють загрозу нової хвилі безгромадянства в Україні: попередній правовий аналізHard-hitting Ukrainian journalist leaves Russia after accusation of ‘incitement to enmity against Russians"Putin’s new law envisages annexing other countries" territory as grounds for Russian citizenship
• Topics / Prohibition of discrimination 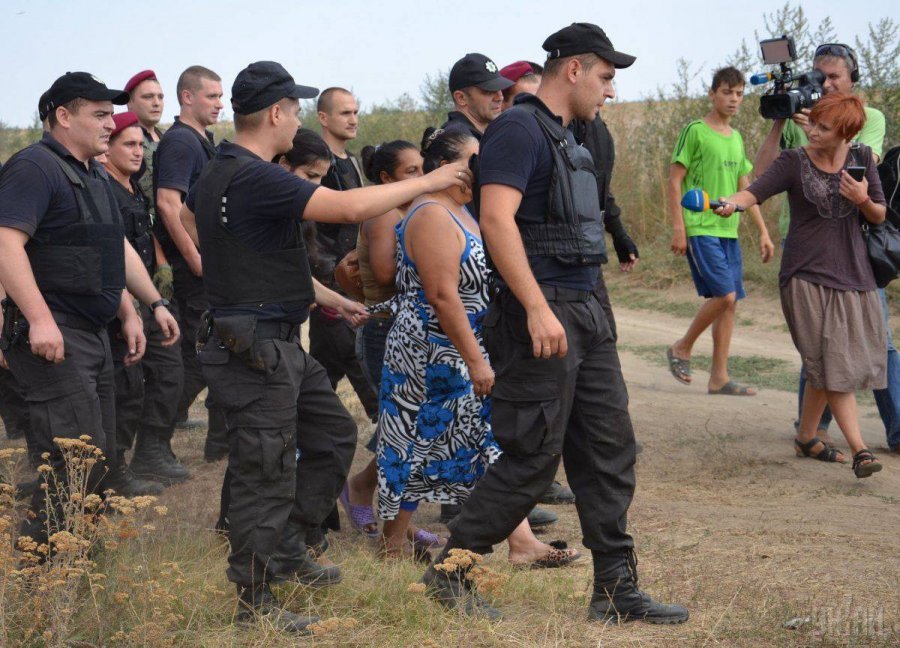 The victims of anti-Roma riots in Loshchynivka and their lawyers have encountered many obstacles to justice over the last five and a half years, but the court ruling passed on 6 December 2021 is in a deeply shocking league of its own.  Judge Maria Arakelian from the Odesa District Administrative Court dismissed the law suit filed by the seven former Loshchynivka residents, essentially asserting that the decision taken to drive them from their homes had been an expression of ‘direct democracy’ to which other residents were entitled.

The anti-Roma riots on 27 August 2016 were reported far beyond Ukraine, not least because of the failure of the police to intervene and the ‘decision’ signed by the Loshchynivka Village Mayor, Viktor Paskalov used to ‘persuade’ (effectively force) the Roma to leave.

The riots were triggered by the discovery of the body of an eight-year-old girl and arrest of a local resident, an ethnic Roma, Mykhailo Chebotar.  The latter’s trial is coming to an end and there remain strong grounds for suspecting that the wrong person is now on trial.  Even without such grounds, it is quite appalling that Arakelian’s ruling should have flouted the presumption of innocence and asserted that the crime was committed by this young man.

On 27 August 2016, a mob of up to 180 locals tried to set one building occupied by a Roma family alight, and devastated several others, with around ten houses in total attacked. The fact that nobody was injured was almost certainly only because the Roma families managed to flee in time.  At the time, the Odesa publication Dumskaya noted that the three homes of more affluent Roma had not been targeted.

In the morning of 28 August 2016, Mayor Viktor Paskalov addressed a meeting of local residents.  He claimed that Roma committed unlawful acts and that he and other residents wanted them out of Loshchynivka.  He drew up, signed and made public a so-called Decision No. 1 of the civic gathering under a title beginning with ‘the demand of residents of Loshchynivka that representatives of the Roma nationality no longer live” in the area.  Paskalov had, thus, collaborated with the rioters, with the Roma then ‘escorted’ from the village.

The law suit brought by seven Roma asked that Paskalov’s actions, and those of the Central Department of the Odesa Regional Police on both 27 and 28 August 2016 be found unlawful.  During the riots on 27 August, as can be seen in the video footage here, the local police essentially stood and watched.  They were undoubtedly outnumbered, however no attempts were made by the Central Department to send in reinforcements.

The plaintiffs asked for moral compensation of 700 thousand UAH, 100 thousand per family.

Judge Arakelian rejected the claim altogether in what lawyer Yulia Lisova called the most regressive ruling in this case.  Arakelian claimed that the eviction of the Roma had been an act of direct democracy by residents with this allegedly something they were entitled to do.  Paskalov’s role had supposedly been merely to formally express this.

She further denied any cause and effect situation since the Roma had fled (in fear of, at very least, attack by the rioters) before Paskalov’s ‘decision’.

The judge also dismissed the claim against the Central Department of the Odesa Regional Police, claiming that this was within the jurisdiction of the local police station.  It was, further, reasonable that only 10 police officers were posted against 180 rioters since it was Saturday evening.  Lisova notes that even though there had been police officers in Loshchynivka since early morning, investigating the murder, the judge had deemed it quite plausible that there had been no warning to the police of the brewing trouble and that the Central Department had first discovered what was happening at 19.30.

Lisova and her colleague, Volodymyr Kondur, will, of course, be appealing against this extraordinary ruling.  It is all the more frustrating as it comes almost three years after what had seemed a vital victory in the case.  As reported, on 25 April 2019, the Fifth Odesa Administrative Court of Appeal court of appeal in Odesa found that the police failure to react adequately during the riots had been unlawful, and awarded compensation to the families driven from their homes.  While the amount awarded had been less than that demanded, it had seemed a crucial first for a Ukrainian Court, especially since it came after three years of obstruction, particularly from the prosecutor’s office.  An earlier court had, in fact, found Paskalov’s actions to be unlawful, but had dismissed the other parts of the claim, including with respect to compensation.

The very small amounts of compensation awarded (10 thousand UAH) were paid, however the ruling was later revoked by the Supreme Court, with the case sent back to the first instance court.

As mentioned, the trial is now coming to an end of Mykhailo Chebotar who has been in detention since 27 August 2016.  This is despite a likely alibi, strong reason for doubting that all possible suspects were investigated and much more.