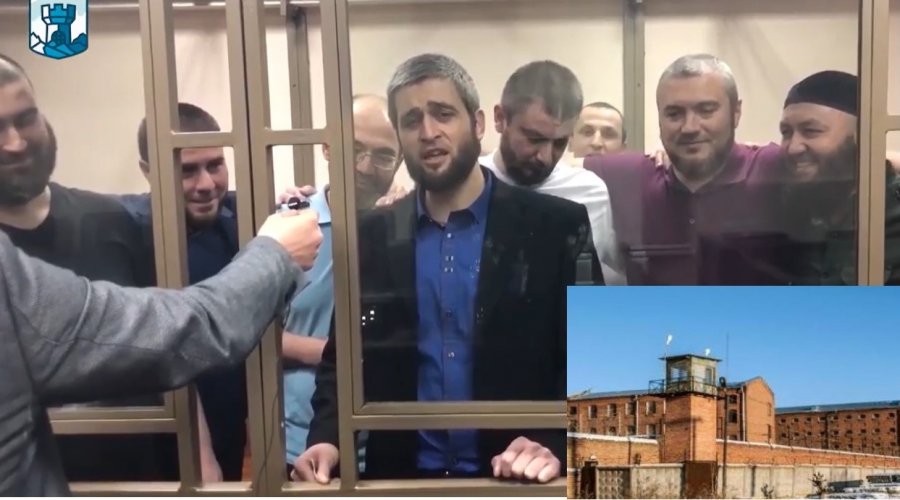 Cold, damp and teeming with vermin, these are the conditions in the Novocherkassk SIZO, or remand prison, where seven Crimean Tatar civic journalists and activists are imprisoned while awaiting their appeal against horrific sentences.  Nor are they the only Ukrainian political prisoners whom Russia is subjecting to conditions tantamount to torture.

Emil Kurbedinov back in the summer of 2021 that he and other defence lawyers had lodged formal complaints over the intolerable conditions which were clearly ignored.  Kurbedinov reported then that Server Mustafayev, Crimean Solidarity coordinator, civic journalist and Amnesty International prisoner of conscience had killed 39 rats in his cell.  All of the men are tormented by cockroaches, ticks and other insects.

Considering the pandemic, it is especially shocking that the SIZO medical staff, even if they do turn up, say that they can’t measure a person’s temperature as they don’t have thermometers.

Human rights defender Mumine Saliyeva learned more details about the conditions on 12 January from her political prisoner husband, civic journalist Seiran Saliyev.  He and four of the other political prisoners (civic journalists Marlen Asanov; Timur Ibragimov and Server Mustafayev, as well as civic activist Memet Belyalov, were sent to Novocherkassk SIZO-3 from a marginally better SIZO in Rostov.  Saliyev says that he is held, together with 14 other men, in a cell with only 13 beds  The problem is not merely that the men have to take turns sleeping, but in the general overcrowding.  The SIZO is currently holding three thousand men, with this around 340 more than there is room for.  The cells do not have proper ventilation and it’s hard to breathe.  If you open the metal shutter of the cell, you’re blasted from early morning until late in the evening with the radio on full volume.  When it’s closed, however, the stuffiness and stench (from the toilet) are intolerable. Saliyev’s cell is extremely damp, and in others, there is water coming down from the ceiling. It is also very cold in the cells, while from the excess dampness clothes, etc. take a very long time to dry.

The conditions are appallingly unsanitary.  The toilet in the cell does not flush, and the men are forced to fill bottles of water to try to clear it at least a bit.  This is when cold water is only provided part of the time, and there is no hot water at all.  The men are very seldom taken out of the cells for what should be a daily amount of time in fresh air, but is likely to be a slightly more open enclosed space.  All of this is, as Saliyev rightly says, equivalent to torture.

In such conditions, it is vital that the men at least receive proper sustenance, yet the prison food constantly includes pork, pig fat, etc. which the Crimean Tatars, as devout Muslims, cannot eat.

The chances of getting any medical care are remote.  There is one medic for several blocks, and you can shout and knock on the door for many hours without any result.

According to Mumine Saliyeva, this is the 16th appeal hearing. The length is unusual, but unfortunately means only that the political prisoners themselves have prepared very well for the hearings. It seems that 14 of the hearings have involved Edem Smailov’s presentation of his addition to the appeal.

The arrests of Marlen Asanov; Ernes Ametov; Memet Belyalov; Timur Ibragimov; Seiran Saliyev and Server Zekiryaev on 11 October 2017, and then of Server Mustafayev and Edem Smailov on 21 May 2018 were the first time that Russia’s FSB so openly targeted Crimean Tatar journalists and activists, most of whom were involved in Crimean Solidarity.  This vital civic initiative arose in April 2016 in response to the mounting persecution of Crimean Tatars and other Ukrainians in occupied Crimea.  It not only helps political prisoners and their families, but also ensures that information is streamed onto the Internet and in other ways circulated about armed searches, arrests, disappearances and other forms of repression.   Russia set to destroying any independent media soon after its invasion and annexation of Crimea, and is now imprisoning eleven journalists, most of whom were active in Crimean Solidarity.

Not one of the men is accused of any recognizable crime, with the charges against them essentially only of unproven ‘involvement’ in Hizb ut-Tahrir, a peaceful transnational Muslim organization which is legal in Ukraine.  Russia is in violation of international law through its application of Russian legislation on occupied territory, and in this case it is applying particularly flawed legislation.  The political prisoners are all facing ‘terrorism’ charges purely on the basis of a secretive Supreme Court ruling from February 2003 which declared Hizb ut-Tahrir to be ‘terrorist’.  No explanation was provided then, nor has it been since, for why a party that is not known to have committed any acts of terror anywhere in the world should be banned as ‘terrorist’.  It has been illegally using these charges against Ukrainian Muslims, most of them Crimean Tatars, since 2015, with the charges now systematically used as a weapon against civic journalists and activists.

Initially, only Marlen Asanov was charged with the more serious ‘organizer’ role under Article 205.5 § 1 of Russia’s criminal code, however in February 2019, the same charge was also brought against Memet Belyalov and Timur Ibragimov. Seiran Saliyev; Ernes Ametov; Server Mustafayev; Edem Smailov and Server Zekiryaev were charged with ‘involvement in such an alleged ‘group’ (Article 205.5 § 2).  All eight men were also charged (under Article 278) with ‘planning to violently seize power’.

The charges were based on illicitly taped conversations in a mosque.  There was not one mention during these conversations of Hizb ut-Tahrir, however the FSB used its own supposed ‘experts’ willing to claim that the subject matter, particular words, etc. gave grounds for concluding that the men were at a ‘conspiratorial meeting’ and were members of Hizb ut-Tahrir .  None of the three ‘experts’ Yulia Fomina; Yelena Khazimulina and Timur Zakhirovich Urazumetov possessed the professional competence to provide such assessments.  In the case of the two ‘linguists’, Fomina and Khazimulina, this was explained in a comprehensive report and then to the court by forensic linguist, Yelena Novozhilova.

This suspect ‘evidence’ as then backed by the even more dubious testimony of two ‘secret’ or anonymous witnesses.  Russia essentially bases all its political trials of Crimean Tatars and other Ukrainians on such alleged witnesses, with this strongly criticized in the 2021  on the Human Rights Situation “in the Autonomous Republic of Crimea and the city of Sevastopol, Ukraine”.  Although the prosecutor is invariably backed by the court in Rostov in maintaining secrecy and blocking any questions that probe the worth of their ‘testimony’, the identity of both men is, in fact, known.  They are Narzulayev Salakhudin, an Uzbek  living in occupied Crimea without the proper documents and Konstantin Tumarevich, a fugitive from justice in his native Latvia.  In both cases, it was clear that the FSB had levers to use to ‘persuade’ the men to cooperate with them, and they are believed to have been used as such anonymous ‘witnesses’ in all cases involving Crimean Tatars from Bakhchysarai.

The trial took place at the same Southern District Military Court in Rostov used in almost all political trials of Ukrainian citizenships since Ukrainian filmmaker Oleh Sentsov was sentenced to 20 years in 2015.

All of the above-mentioned flaws in the case, as well as Russia’s violation of international law in applying its legislation on occupied territory, were systematically ignored by prosecutor Yevgeny Kolpikov and judges Rizvan Zubairov (presiding); Roman Saprunov and Maxim Nikitin.

There is simply no possibility that any of these individuals seriously believed that the men on trial were guilty as charged yet Kolpikov demanded monstrous sentences against all eight men and the judges provided them against seven of them.  This was the first such ‘trial’ when one of the eight, civic journalist and photographer Ernes Ametov was acquitted, with this probably one of the reasons why the FSB later brought the same charges against another ‘Ernest’ (Ernest Ibragimov and Oleh Fedorov).

On 16 September 2020, Zubairov; Saprunov and Nikitin passed huge sentences with each of these, which will be in Russian prisons, to be followed by 12 – 18 months’ restriction of liberty in occupied Crimea.  Marlin Asanov was sentenced to 19 years in a harsh regime prison colony; Memet Belyalov – 18 years; Timur Ibragimov – 17 years; Seiran Saliyev – 16 years; Server Mustafayev – 14 years; Edem Smailov – 13 years and Server Zekiryaev – 13 years.

The appeal is being heard by the Russian Military Court of Appeal in Vlasikha (Moscow region). This is a closed city, and the men are communicating with the court via video link from the SIZO.

All of the men have been recognized as political prisoners by  and  has also run urgent appeals on behalf of Server Mustafayev whom it has declared an AI prisoner of conscience.

The men’s release has been demanded on many occasions by, among others, the US Mission to the OSCE; ; ;  and .  In its statement following the sentences in September 2020, HRW wrote that the verdict “once again, shows just how determined Russian authorities are to make Crimean Tatar activists – and their families – pay the price and how they will subvert the law and courts to do so.”

PLEASE WRITE TO SEIRAN SALIYEV AND THE OTHERS

The addresses below will be current until after the appeal hearing, and will be updated.

Letters are an important lifeline for any political prisoner and they also send a vital message to Moscow demonstrating that its treatment of the men is under scrutiny.