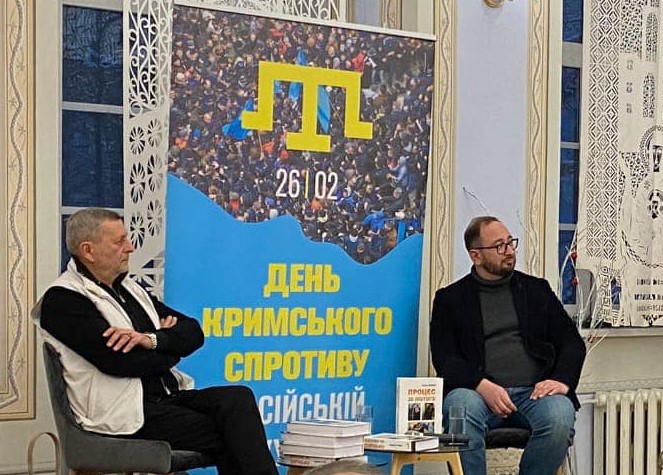 During the presentation of the book From left Akhtem Chiygoz, Nikolai Polozov Photo shared by Elmira Ablylimova (Chiygoz’s wife) The photo behind the men is of the demonstration on 26 February 2014, Day of Crimean Resistance

Russia’s trial of Akhtem Chiygoz, Deputy Head of the Mejlis of the Crimean Tatar people and other Crimean Tatars was planned as a triumphant victory over all Ukrainian resistance to its occupation of Crimea.  It went badly wrong and, instead, exposed the methods Moscow used to try to mask its land-grab, and Russia’s reprisals against those Crimean Tatars who demonstrated that Crimea had not asked to ‘join’ Russia.  Some of the highly incriminating material gathered in the course of the trial is now with the International Criminal Court.

It was in large measure thanks to Russian lawyer Nikolai Polozov, that the political trial of Chiygoz was exposed in all its squalor and received international condemnation.  Polozov has now written a book on the case, entitled ‘The 26 February Trial’ which highlights just why 26 February 2014 is recognized as Day of Crimean Resistance throughout Ukraine.  He has been presenting the work, together with its main hero, Akhtem Chiygoz, in various Ukrainian citizens, with the main presentation to take place on 26 February in Kyiv.  In an interview to Crimean Realities, Polozov was asked to explain the point of the trial, and the role in it of Natalia Poklonskaya, a Ukrainian traitor who was appointed ‘chief Crimean prosecutor’ by the occupation regime.  Polozov answered that the trial had initially been planned “as a triumph for the victorious side and those collaborators who joined it.”  He believes Poklonskaya had hoped that the trial would be like another ‘Nuremberg Trial’, but this time against the supposed ‘Ukrainian fascists’, as represented, in her perception, by Chiygoz. It was all coated in pathos, Polozov adds, with the so-called Cossacks who collaborated with Russia appeared with all the medals received, presumably for their treason before Ukraine.  The sentence was intended, Polozov believes, as a sentence against all those Ukrainians in Crimea who were not subservient to the occupation regime.

The ‘trial’ was a first even for Russia in that Chiygoz was tried, effectively in his absence, with him forced to communicate both with his lawyer and with the ‘court’ by video link from the SIZO, or remand prison, where he was imprisoned from 29 January 2015.

There was no ‘blitskrieg’ and, in fact, Poklonskaya only held out for three ‘hearings’ before disappearing from a trial that was in no way going as planned.  Russia and its puppets could deliver the essentially predetermined sentence, but they proved unable to prevent Polozov from insisting on interrogating over 200 witnesses and / or victims during more than 150 hearings, as well as closely following the huge amount of video footage of the events of 26 February 2014.  A lot of the information gathered was, in fact, from the so-called ‘victims’ and other witnesses for the prosecution who quite openly gave important information about their role in helping Russia annex Crimea.  As reported earlier, the Russian ‘investigators’ also provided highly valuable information, including for international courts, about the mercenaries from the so-called  ‘Black Sea private military company’ and a paramilitary Cossack organization from Sevastopol who were brought in from Sevastopol.  It was, in fact, after a large group of men arrived on coaches from Sevastopol and joined the pro-Russian demonstrators, that the pro-Russian side began behaving more aggressively.

Polozov stresses that the case is still continuing, with some of the material with the International Criminal Court at the Hague, while a lot will also form the substance of the case before the European Court of Human Rights.

There were two demonstrations on 26 February 2014 – a 10 thousand-strong, pro-Ukrainian unity demonstration called by the Crimean Tatar  Mejlis (self-governing body) and a much smaller, pro-Russian, demonstration.  Russia was hoping to carry off a coup without openly deploying Russian soldiers, and there was a plan to push through an FSB-overseen attempt to ‘vote’ on a change in Crimea’s status.  The huge pro-Ukrainian demonstration thwarted that plan, and it was at 4 a.m. the following morning, 27 February, that Russia deployed soldiers without insignia to seize control in Crimea.

Russia can bring in as many ‘legal acts’ as it likes to try to distort the historical facts, but they remain irrefutable.  The demonstration on 26 February 2014 took place on Ukrainian territory under Ukrainian law, and Russia’s imprisonment and prosecution of Chiygoz; Ali Asanov; Mustafa Degermendzy and several other Crimean Tatars, as well as its later ‘trial in absentia’ of Mejlis Chairperson Refat Chubarov under Russian legislation were not just in violation of international law, but legally absurd.

Russia claimed that there had been a /mass riot’ on 26 February and that, first Chiygoz, and then Chubarov, were guilty of ‘organizing a mass riot’.  There were two deaths that day, but both were in the area where pro-Russian demonstrators were gathered, and one person died of a heart attack.  Back in December 2015, the husband of the other person who died,  Valentina Korneva, was reported to have stated that he did not think any of the Crimean Tatars then charged were to blame and to have mentioned two pro-Russian thugs.  It is almost certainly because of the impossibility of blaming Crimean Tatars that during the earlier trials, those deaths were constantly mentioned, but no charges were ever brought.

All of the prosecutions should also be of interest to the UN’s International Court of Justice which is currently considering two claims brought against Russia by Ukraine, one of which is over Russia’s discrimination against Crimean Tatars and ethnic Ukrainians in occupied Crimea.  In early 2015, the Russian-controlled ‘investigators’ did not even try to simulate objectivity, with it quite clear from the outset that they were interested only in prosecuting Crimean Tatars, despite the huge amount of video footage clearly showing pro-Russian activists provoking conflict.

The main target was always Chiygoz, with the two men imprisoned for two years – Ali Asanov and Mustafa Degermendzhy – almost certainly punished for refusing to give false testimony against the Deputy Mejlis leader (details here).

In his final address to the ‘court’ on 9 August 2017, Chiygoz said that he and other Crimean Tatars were on trial for upholding the law and for defending Ukraine’s territorial integrity, with Russia’s prosecution carried out by people who themselves turned traitors.  His sentence was “a sentence directed against the entire Crimean Tatar people on behalf of the Russian Federation which has occupied my Homeland”.

Chiygoz was sentenced on 12 September 2017 by three ‘judges’ of the Russian-controlled High Court in Simferopol: Viktor Ivanovych Zinkov (presiding), Igor Igorevich Kryuchkov and Alexei Viktorovich Kozyrev to eight years’ imprisonment.  In a separate ‘trial’, five other men, including Asanov and Degermendzhy, received suspended sentences.  Chiygoz and another persecuted Mejlis leader, Ilmi Umerov, were both released into exile on 25 October 2017, in a deal negotiated with the help of Turkish President Recep Tayyip Erdoğan.  It now appears that the two men were in fact exchanged for two suspected Russia state killers, accused of at least one political killing in Turkey (details here).

Russia’s Investigative Committee announced at the end of March 2020 that it was charging Refat Chubarov under two articles of Russia’s criminal code.  One of these was the notorious Article 280.1 § 2 on so-called ‘public calls to carry out action aimed at violating Russia’s territorial integrity’ which came into force shortly after Russia invaded and annexed Ukrainian Crimea.  The second charge was an exact rehash of the charges against Chiygoz.

Russia thus ignored international condemnation of the earlier farce and reacted to the hugely incriminating information that the first ‘trial’ had brought to life in typically lawless fashion by illegally preventing Polozov from representing Chubarov.  The latter was sentenced, in absentia, on 1 June 2021, on these same grotesque charges.