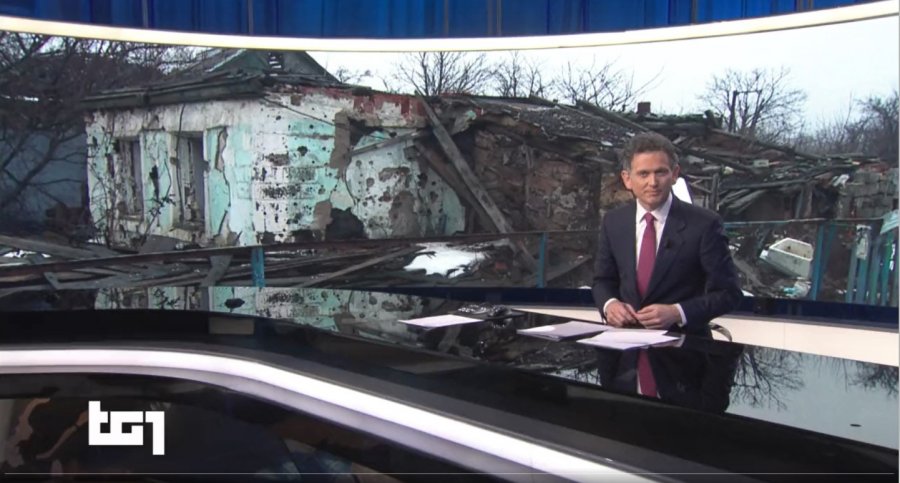 Italy’s public broadcaster RaiUno has broadcast several ‘reports’ from occupied Donbas which present a seriously biased view of the conflict in eastern Ukraine, one which corresponds to the narrative promoted by Russia and the self-proclaimed and Russian-controlled ‘Donetsk people’s republic’ [DPR].  No attempt has been made to provide alternative points of view, nor to mention information from international bodies and human rights NGOs that paint a very different picture. The Italian film crew do not even supply basic fact-checking, with this most shocking when ‘DPR leader’ Denis Pushilin repeats flagrant lies about the downing by a Russian Buk missile of Malaysian airliner MH17 over militant-controlled Ukraine in July 2014.

According to Ukrainian journalist Olha Tokariuk, there has been no response from the RaiUno management either to the letter sent from Ukraine’s Ambassador to Italy, Yaroslav Melnyk or to outrage expressed on social media.  In his letter to the head of RaiUno Monica Maggioni, Ambassador Melnyk pointed to the one-sided nature of the report which, he stressed, was “in total violation of the standards and ethics of journalism” and was based on “shameful clichés of Russian propaganda.”  He also noted that there is criminal liability for illegally entering Ukrainian territory, and it certainly seems likely that the Italian public broadcaster’s filming crew entered Donbas via the border with the Russian Federation not presently under Ukrainian government control.

The Ambassador was referring only to the first two episodes, however there have now been five: four based on Cassieri’s visit to Donetsk - on 11 January 2022; on 12 January and 13 January, as well as the weekly program TvSette on 14 January.  None made any effort to present a balanced view.  There was also one broadcast from Luhansk, although this may not have been part of the same series and appears less objectionable.

There is one amusingly honest moment in the program available here in Italian. Alessandro Cassieri is told by a man sitting in a bunker (6.21 on the tape): “I wish that it had gone like in Belarus, in Crimea, in Kazakhstan: 10 days and its over”*.  It was surely of interest that the Ukrainian clearly saw Russia as playing a role far different from the ‘humanitarian aid’ which is all that the Italian public broadcaster deemed fit to mention.  Cassieri, however, asked no questions and the camera moved  to a different scene altogether.

Cassieri was reporting from Donetsk which has been under the control of the so-called ‘DPR’ since the summer of 2014, and could clearly not interview, for example, soldiers from the Ukrainian Armed Forces.  Such restrictions do not absolve him, as a journalist, from his responsibility to provide the audience with a truthful representation of the situation, one that does not deliberately omit or distort the facts.

It is seriously difficult to see his role in these programs as that of a journalist.  After a brief introduction to the subject matter, Cassieri states the following: “There has been regression, going in step with the war. On the one side, Kyiv, on the other Donetsk and Luhansk that have proclaimed themselves independent republics, while in Kyiv, backed by Europe, a revolution was transformed into a civil war in the beginning and then a military one quickly afterwards, with Kyiv, America and NATO and a greater part of Europe against the independence fighters of the great mother Russia.

There is a huge amount of evidence, not least from Russians, like Igor Girkin and Aleksandr Borodai, as well as Ukrainian ‘DPR’ supporter Pavel Gubarev, confirming that there never was a ‘civil war’, but aggression funded, manned and controlled by Russia.  It was Girkin and heavily armed fighters who crossed into Ukraine and seized control of Sloviansk on 12 April 2014.

That, however, is not the view foisted by Cassieri’s program.  The latter goes on to interview Pushilin who is identified as “the President of the People’s Republic of Donetsk”, although even Russia has yet to formally recognize this so-called ‘republic’.

Pushilin’s words are simply teeming with lies.  He claims that Russia has ‘sustained’ them from the outset with “humanitarian aid, food and medical aid, the release of ID documents, since we were stateless persons,  with passports for those that wanted to go to Russia or to go abroad. And then there was economic support, opening its market to our businesses, a large and evident support. At the same time, Americans and NATO, instead, were giving weapons to the Ukrainians.”

Russian President Vladimir Putin’s illegal decrees in 2019 making it very easy for any residents of Donbas to receive Russian citizenship had nothing to do with people being ‘stateless’.

The most blatant lie, however, concerns the massive Russian involvement in the military conflict.  See, for example, Study confirms that Russia is pouring military equipment and arms to Donbas militants.

Cassieri does not ignore this major question, but rather twists it totally.  Instead of at least broaching the subject of Russian forces and mercenaries sent to Donbas to kill Ukrainians, he instead calls “military support” a key issue, but discusses only the “tens of thousands” of Russian soldiers “amassed 200 km from the Ukrainian border.”   After his words, and Pushilin’s response, it would be most unlikely that those in the audience gleaning their information only from this public broadcaster’s ‘report’ would understand that this is not just US, NATO and EU ‘hysteria’ over allegedly legitimate movements of Russia’s troops around its own territory.

The program goes on to accuse only Ukrainian forces of civilian casualties (using seriously dubious figures clearly provided by the ‘DPR militants).

It is possible that Cassieri understood how extraordinary such attempts to rewrite the facts are given the 298 men, women and children who died on 17 July 2014 when the MH17 passenger plane was shot down by a Russian Buk missile.  Cassieri mentions that there is an international investigation, and a missile made in Russia, but asks only Pushilin for his comments. Pushilin claims as follows:

“On our part, we see a prejudiced approach to the international investigation. Russia wanted to participate in the investigation but they didn’t allow it to. The accusations were constructed on the basis of manipulated videos that were on Google. There were American satellites in action but these images for some reason that is never explained, were not provided. For us, this investigation is very far from the truth.”

Cassieri must have known that Russia prevented a UN investigation; that the Joint Investigation Team and Dutch Prosecutor have now provided vast amounts of scrupulously verified evidence identifying the military location in Russia of the Buk missile brought to militant-controlled Donbas in July 2014, showing how it was hastily returned to Russia after the disaster, and Russia’s role generally  (details and links here).

It would seem that such facts did not suit the pro-Russian, pro-militant slant of his program and so the audience were left with uncorrected lies.

It is unclear what governed Cassieri’s decisions when making these programs, but journalist ethics were certainly not a priority.  It is baffling that the Italian public broadcaster who is, after all, funded by Italian taxpayers, should be failing to respond when those same Italian citizens are so deliberately misled.