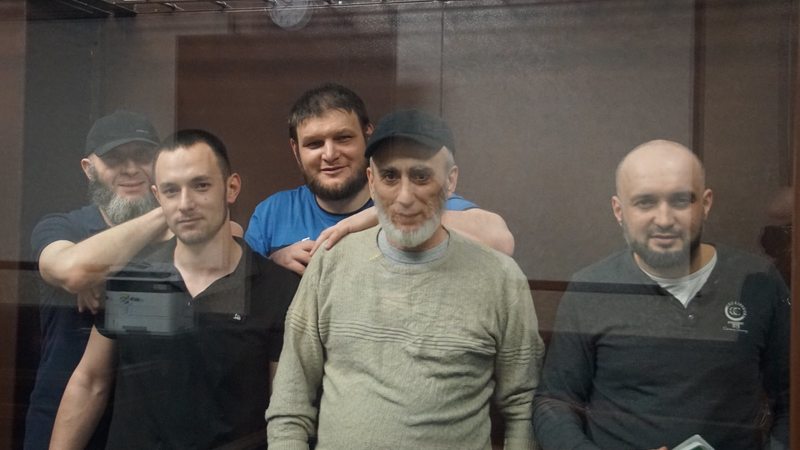 Russian prosecutor Yevgeny Kolpikov has demanded sentences from 16 to 18.5 years against Crimean Tatar journalist Remzi Bekirov; human rights defender Riza Izetov; and three civic activists Rayim Aivazov; Farkhod Bazarov and Shaban Umerov.   The men’s ‘trial’, on ‘terrorism’ charges without any recognizable crime, is ending two months after former US Ambassador to Ukraine, William Taylor wrote to Remzi Bekirov, praising his “courage in the face of Russian oppression” and calling him “an inspiration, not only to your fellow Ukrainians, but to freedom-loving people around the world.”

The ‘trial’ now drawing to an end at the notorious Southern District Military Court in Rostov (Russia) is the first of five clones, based on the same flawed charges and fabricated ‘evidence’.  The arrest of 25 Crimean Tatar journalists and civic activists on 27 March 2019 (or shortly afterwards) aroused strong international condemnation and one of the reasons for dividing the case into five clones is probably to reduce publicity from a case so obviously aimed at crushing the Crimean Tatar human rights movement.

Not one of the 25 men is accused of any actual crime or even of a plan to commit a real crime, merely of ‘involvement’ in a peaceful organization (the transnational Muslim Hizb ut-Tahrir party) which is legal in Ukraine and most other countries.  In an extremely secretive and unexplained ruling from February 2003, Russia’s Supreme Court declared Hizb ut-Tahrir ‘terrorist’.  It was not and is still not known to have committed acts of terrorism anywhere in the world, and Vitaly Ponomaryov from the Memorial Human Rights Centre has suggested that the decision was politically motivated.  By calling Hizb ut-Tahrir  ‘terrorist’, the Russian authorities could justify sending refugees back to Uzbekistan where they faced religious persecution and torture.

Since 2015, Russia has been breaching international law for another reason as well, namely by applying its legislation in occupied Crimea.  Over 80 men, most of them Crimean Tatars, have been arrested on ‘Hizb ut-Tahrir’ charges, with the prosecutions increasingly used as a weapon against civic journalists and activists.

The five men in this case are facing the more serious charge of ‘organizing a Hizb ut-Tahrir group’ under Article 205.5 § 1 of Russia’s criminal code, the others with involvement in such an alleged group (Article 205.5 § 2).  It usually seems very arbitrary and only a question of the length of sentence which charge a person faces.  This time, however, there are very strong grounds for believing that Rayim Aivazov was reclassified as an ‘organizer’ after he refused to be silent about the torture he was subjected to following his arrest during the night from 16-17 April 2019.

The sentences demanded by Kolpikov on 17 January all entail imprisonment in the harshest of all Russian prison colonies, with a further 1 or 1.5 years’ restriction of liberty after their release.

It is important to stress that although the sentences demanded in this case are much higher than those normally passed by Russian courts for murder, the only ‘evidence’ sought is of ‘involvement’ in Hizb ut-Tahrir, and here too no real proof is required.

Kolpikov claimed that “despite the denial of guilt by the defendants who frequently expressed their dissatisfaction with the politics and security services of the Russian state, their guilt was proven during the court trial”.

This was categorically not the case.  The charges were essentially based on illicitly taped conversations between the 25 men on religious, political and other, entirely innocuous, subjects back in 2016.  Transcripts of the scarcely audible conversations were sent to FSB-loyal ‘experts’ who essentially provided the assessments demanded of them. During one of the hearings, the defence established that nobody has seen the original tapes of the conversations.  The defence questioned two experts who carried out a phonoscopic examination and confirmed that there were signs of interference on the tape.

There are absolutely no good grounds for keeping any ‘witnesses’’ identity secret and there is very strong evidence that men are being tortured, or threatened with imprisonment if they do not agree to ‘cooperate’ with the prosecution.  Such collaboration almost certainly includes acting as ‘secret witnesses’.

The worth of such ‘testimony’ from secret witnesses was graphically exposed by a telling discrepancy in the initial account given by ‘secret witness Faritov’ and in court.  Faritov was first ‘questioned’ before Aivazov’s arrest.  He then gave ‘testimony’ that corresponded with the FSB’s version as of late March 2019, and did not mention Aivazov at all.  It was after Aivazov formally retracted his supposed confession, that he was directly warned, with  lawyer, Maria Eismont as witness, that he would “in that case” get the harsher of the two charges.  This is exactly what happened in August 2020.  During his interrogation in June 2021, ‘Faritov’ totally changed his testimony.  In full accordance with the FSB’s adjusted indictment, he now claimed to remember that Aivazov, whom he had ‘forgotten’ in 2019, was one of the organizers.

All of this, as well as the efforts to conceal proof of Aivazov’s torture and much more, were invariably ignored by the three judges -  Oleg Volkov (presiding); Vitaly Mamedov and Magomedbasir Shuyapov

The arrests on 27 March 2019 were condemned by Human Rights Watch who stated that “the sweeping arrests in Crimea aim to portray politically active Crimean Tatars as terrorists as a way to silence them”.  All of the men were recognized almost immediately as political prisoners by the Memorial Human Rights Centre, and their release has been demanded by, among others, the European Parliament and US State Department.

The next hearing in the court debate, where the defence and, probably, the defendants present their position is scheduled for 18 January.