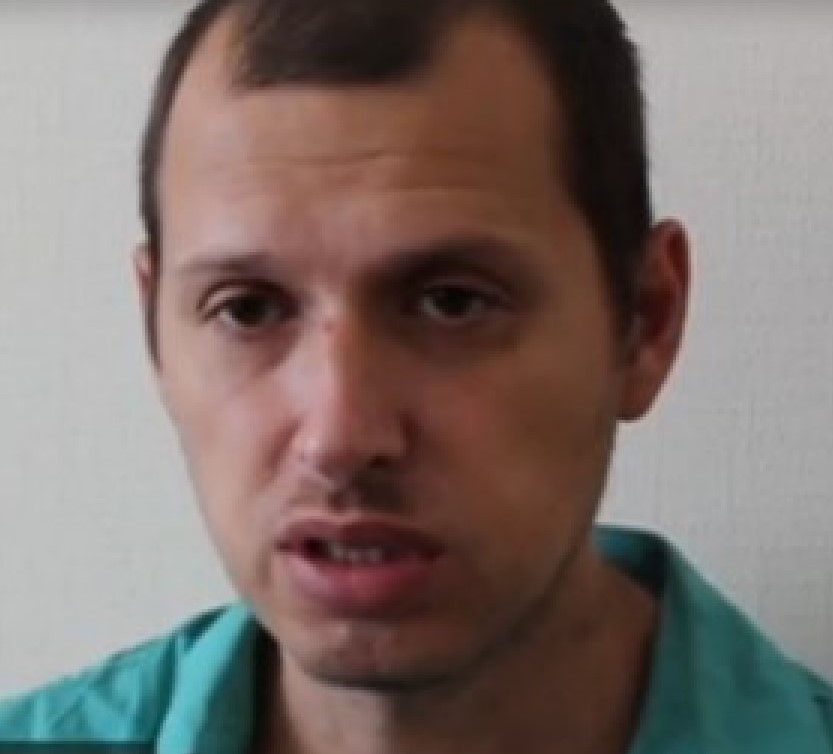 Yevhen Brazhnikov from around the time that he was at Izolyatsia

A Ukrainian court which was due to begin the trial of Yevhen Brazhnikov on charges of torturing Ukrainian hostages has instead ordered that an arrest warrant be issued, and that Brazhnikov be placed on the international wanted list. The news from the hearing on 18 January posted by Stanislav Aseyev, writer and former hostage, would seem to confirm an earlier report on 26 November 2021 that Brazhnikov had fled to France where he has allegedly asked for political asylum.  Since Aseyev is one of at least nine former hostages planning to provide witness testimony backing the charges of involvement in torture at the notorious Izolyatsia secret prison in occupied Donetsk, it is hard to imagine that the French authorities, if genuinely approached, would deem Brazhnikov’s prosecution to be political persecution.  There remain very serious questions as to how a person facing the charges before Brazhnikov should have been able to leave the country on the eve of the trial.

Back on 26 November, Graty reported that Brazhnikov’s lawyer, Vitaly Honcharov had passed a written application to the [Obolon District] Court in Kyiv asking that his client be allowed to take part in the proceedings by video link from Franch where he had asked for asylum.  There was no independent confirmation of this at the time, however Aseyev reported on 18 January that the panel of judges had also rejected Honcharov’s application.

Although Brazhnikov does appear to have been imprisoned at Izolyatsia by militants from the self-proclaimed and Russian-controlled ‘Donetsk people’s republic’ [‘DPR’], he is accused by other hostages of having taken part in torturing them and others. There was outrage, and frustration from the families of hostages who were not freed, when he was released on 29 December 2019 as part of the last major exchange of prisoners.

According to Stanislav Pechonkin, one of the former hostages who has described how he was tortured by Brazhnikov, the latter was an active participant of pro-Russian rallies during the spring of 2014 and attacked members of pro-Ukrainian demonstrations.  Pechonkin alleges that Brazhnikov was involved in the violence against pro-Ukrainian demonstrators on 13 March 2014, when 22-year-old Dmytro Chernyavsky was killed.  Brazhnikov and his family seem to have left for government-controlled Ukraine after the fighting began, however he later returned to Donetsk,  and was reportedly seized by the so-called ‘DPR ministry of state security’.  Whether, as he claims this was over money (many hostages are seized for ransom), or over an alleged hiding place with weapons, is unclear.

It was reported in March 2020 that the SBU [Ukraine’s Security Service] had informed Brazhnikov that he was under suspicion of having tortured hostages at Izolyatsia,  He was, however, only placed under 24-hour house arrest.  Since there are quite strict time limits on periods of house arrest, he was at liberty by 13 May 2021, over a year later, when the case was handed to the court. He is charged with ill-treating POWs and civilians under Article 438 § 1 of Ukraine’s Criminal Code and with aiding a terrorist organization (Article 258-3 § 1).  It is asserted that from April 2014 to December 2019 Brazhnikov worked for ‘DPR’ by carrying out the instructions of the so-called ‘DPR ministry of state security’, which is in control of Izolyatsia.  His ‘tasks’ involved torturing hostages to extract supposed ‘confessions’.

At the time, Aseyev expressed the hope that Brazhnikov would receive the maximum sentence available, and said that there were nine direct victims of Brazhnikov’s torture, and several other former hostages and POWs who had witnessed his ill-treatment of others.

Oleksandr Kleshchenko, the prosecutor in the case, informed Graty on 9 September, that the Supreme Court had finally allowed an application from nine former hostages and moved the trial from a court in the Donetsk oblast to the Obolon District Court in Kyiv.  Although the hostages’ application had been supported by the prosecutor, this was the third attempt to get the trial moved, with the Supreme Court having, both in April and July claimed that that here were no exceptional grounds for believing that the transfer of the case would facilitate timely and effective criminal proceedings.  There are no grounds for believing this to have been intentional, but the delay has put any trial of Brazhnikov in question.

The nine former hostages (Stanislav Aseyev; Roman His; Oleh Kulakov; Ihor Kulish; Kyryllo Polykarpov;  Stanislav Pechonkin; Oleksandr Repetylo; Oleh Suherei and Serhiy Usatiuk) were all tortured at Izolyatsia and wish to testify as prosecution witnesses.  They explained that it would be logistically and financially difficult for them to travel to the Donetsk oblast.  It was thanks to their consistent account of Brazhnikov’s active part in their torture that the charges were laid against Brazhnikov, and the latter had every reason to want them prevented from attending the trial.

Shortly after the initial report that Brazhnikov had left the country, Obozrevatel published an article asking how Brazhnikov had managed to flee and who had helped him.  Citing unnamed sources, including one in the security service, the publication made some worrying allegations.  One unnamed source asserts that Brazhnikov, who was himself living in Kyiv, fought so hard to keep the trial in Pokrovsk (Donetsk oblast), because it is much harder and more expensive “to sort out the issue” in Kyiv, and much more difficult in the light of public attention.  The other factor suggested by their source was the arrest in Kyiv of Denis Kulikovsky, or ‘Palych’, known to former hostages as the chief butcher of Izolatsia.  The idea is that Kulikovsky can provide testimony against Brazhnikov.  That may well be the case, but there are already nine former hostages who are very willing to testify against Brazhnikov.

None of this can be proven, but such a vested interest would explain how Brazhnikov was able to quietly exit the country.  At present, there appear to be only the words of his lawyer that would confirm that i) he is in France and that ii) he has asked for ‘asylum’.

Brazhnikov is one of three men who have been charged over involvement in the creation of the Izolyatsia secret prison (Roman Lyahin) or torture of hostages (Yevhen Brazhnikov and Denis Kulikovsky).  All of these cases have given grounds for concern.