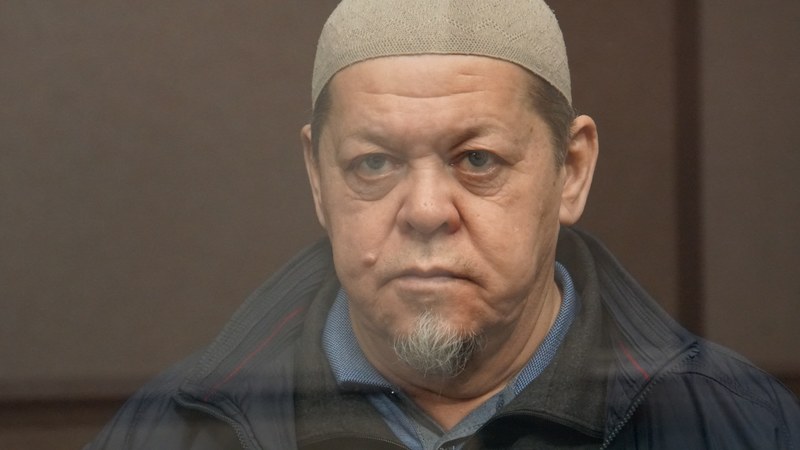 Russian prosecutor Sergei Aidinov has demanded a 12-year sentence against Zekirya Muratov although he can be in no doubt that this would be a death sentence for the 64-year-old Crimean Tatar political prisoner who has grave health problems.  Muratov has already paid a heavy price for refusing to provide false testimony against other Crimean Tatars for the FSB, and, if Russia gets its way, he will pay with his life.

Muratov has been imprisoned since 7 July 2020, with his ‘trial’ now ending at the Southern District Military Court in Rostov (Russia), notorious for passing politically motivated sentences against Ukrainian political prisoners.  At the beginning of the ‘court debate’, prosecutor Aidinov claimed that Muratov’s ‘guilt’ had been proven and asked for the 12-year sentence in the harshest of Russia’s penal institutions, with the first three years in a prison, where the conditions are especially shocking.  Aidinov chose to pretend that Muratov could survive such a horrific sentence and demanded that a further 18 months restriction of liberty be added, ‘after the 12 years’.

Muratov has grade three disability status, and suffers from a number of potentially life-threatening conditions, including a heart defect and cardiac insufficiency, high blood pressure; a dropped kidney, causing constant attacks of acute pain, and much more.

The sentence demanded is despite the indictment not containing any recognizable crime, nor any evidence.  Muratov, a retired musician from Alushta, is charged only with ‘involvement’ in Hizb ut-Tahrir, a peaceful, transnational Muslim party which is legal in Ukraine and which is not known to have carried out acts of terrorism anywhere in the world. Russia has never provided any grounds for a suspiciously secretive 2003 Supreme Court ruling that declared Hizb ut-Tahrir ‘terrorist’.  Since 2015, the ruling has, however, been used as ‘justification’ for imprisoning and sentencing Crimean Tatars and other Ukrainian Muslims to terms of imprisonment up to 20 years on supposed ‘terrorism charges’.  In each case, a person is accused either of the more serious ‘organizing’ a Hizb ut-Tahrir group (Article 205.5 § 1 of Russia’s criminal code, carrying a sentence of up to life imprisonment, or of ‘involvement’ in such an alleged group under Article 205.5 § 2, with this still carrying a potential sentence of 10-20 years.  It is the latter charge which Muratov is facing.

Muratov’s lawyer, Lilya Hemedzhi gave a scathing account of the ‘evidence’ cited by the prosecutor.  He stated, for example, that neighbours had heard how people “of Muslim appearance, with beards”, had come to Muratov’s home and had discussed something loud.  The particular neighbour who said that people were speaking loudly had no idea what they were discussing, so how this could be proof of anything was a mystery.  Hemedzhy stated that for a man of Muratov’s age, the sentence demanded was tantamount to a death sentence and asked how this could possibly be justified “for discussion, for conversations and for taking part in the civic life of the city.”

As in all of these trials, the main ‘evidence’ is provided by an anonymous witness, somebody whose testimony cannot be verified.  This individual, known by the pseudonym, ‘Bekirov’ has claimed that Muratov was an active participant in so-called ‘khalakaty’ or religious studies, but was unable to name any cases where Muratov had spoken of any violent plans, nor where he himself had faced any threats that would justify the secrecy.

Muratov believes that it is the FSB that this supposed secret witness fears, not Muratov or any other Crimean Tatar.  There is every reason, including Muratov’s own experience, to believe that this is the case.

Muratov’s arrest came two months after he rejected the demand from Aleksandr Kompaneitsev, a Ukrainian traitor, now working for the FSB, that he collaborate with them.  He refused to provide false testimony against fellow Crimean Tatars, and was told by Kompaneitsev that the latter would get him imprisoned “whatever”.   Kompaneitsev has already played a similar role in the arrests and imprisonment of six Amnesty International prisoners of conscience, including human rights activist Emir-Usein Kuku, as Muratov probably knew.  Muratov not only found the courage to withstand such pressure, but also provided details of the blackmail in court.  He named Kompaneitsev and said that the latter had threatened to get him a prison sentence if he didn’t agree to collaborate with him.  The FSB man, Muratov said, had complained that “there was no use” in the FSB’s previous ‘informer, and had told him that if he worked with the FSB, he’d “have a green light”.  If he didn’t, he’d “go down hard”.  Muratov told the court that he had refused, saying “let them imprison me, I will not go against my people, and against my religion”.

The renowned Memorial Human Rights Centre considers all those whom Russia charges with ‘terrorism’ merely on the grounds of alleged involvement in Hizb ut-Tahrir  to be political prisoners.  It has repeatedly pointed out that in the case of Crimean Tatar and other Ukrainian political prisoners, Russia is also in violation of international law by applying its legislation on occupied territory.  There has also been condemnation from all major international structures and democratic states, with the lists of political prisoners whose release is demanded including Muratov.

The defence will now present their summary of the reasons for acquitting Muratov.  These are compelling, however the entire nature of the ‘trial’ and the fact that ‘testimony’ from a secret witness was allowed make it difficult to feel confident that they will be heeded by presiding judge Timur Khabasovich Mashukov, together with Igor Vladimirovich Kostin and Roman Konstantinovich Plisko.

The letters tell him that he is not forgotten and also send an important message to he SIZO prison staff and Moscow that their actions are under scrutiny. Letters need to be in Russian, and on ‘safe’ subjects.  If that is a problem, use the sample letter below (copying it by hand), perhaps adding a picture or photo. Do add a return address so that he can answer.