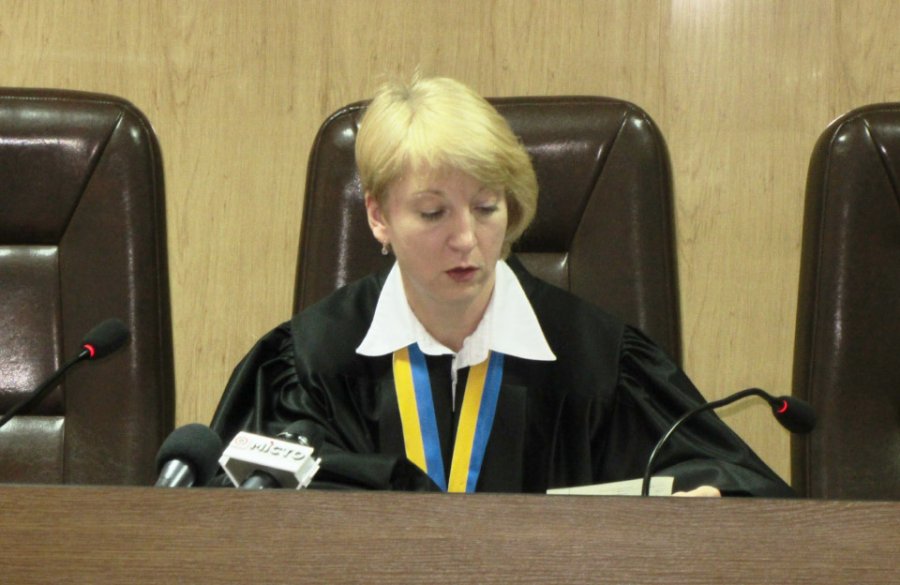 The Kharkiv Court of Appeal has overturned the acquittal of a former Poltava deputy mayor who offered a bribe to Oktyabrsky District Court Judge Larysa Holnyk.  The victory for those fighting corruption is partial and belated, but important, nonetheless, since up till now it was Judge Holnyk who suffered persecution for blowing the whistle on high-level corruption.

The events in question were back in 2014, when the then president of the Oktyabrsky District Court, Oleksandr Strukov passed a case to Holnyk involving an alleged administrative offence (under Article 172-7 of the Code of Administrative Offences) by the Mayor of Poltava Oleksandr Mamay.  He was accused of having concealed a conflict of interest over a decision by the City Council on land distribution (in which the beneficiary was his step-daughter).

There were various ways in which Holnyk came under attack for what Mamay and his lawyer claimed was her ‘biased attitude’, and Mamay himself kept failing to appear at the hearings. Then Dmytro Trykhna, a former deputy mayor and friend of Mamay, came to see Holnyk and said that Mamay would come to the court if she terminated the proceedings. He proposed that she meet with Mamay in order to discuss the conditions.  Holnyk, understandably, interpreted this as a veiled bribe offer and approached the police department dealing with corruption.  The latter initiated criminal proceedings over an alleged offer of a bribe to an official (Article 369 § 3 of the Criminal Code) and organized covert videoing of subsequent meetings,  Over January 2015, there were several phone calls from Trykhna, six meetings in the court, during one of which Mamay was present.  Amounts of money (up to around 5 thousand USD to be paid in dollars) were mentioned, seemingly as ‘compensation’ for terminating the case or for agreeing that she be removed from it.

After the last meeting, Mamay actually claimed publicly that Holnyk had demanded the five thousand dollars for terminating the case.  The proceedings initiated over this allegation were terminated for lack of a case, but the allegation was used as the pretext for getting Holnyk removed.  The case was, shortly afterwards, terminated.

Trykhna was accused in June 2015 of trying to bribe an official (Article 369 § 3 of the Criminal Code) and then, in November, of interfering in the work of a judge (Article 376 § 1).  The case was initially passed to the same Oktyabrsky District Court, but then moved to the Kyivsky District Court in Poltava.  Holnyk had victim status, and appeared in court, backing the prosecution’s case and that recorded on the video. 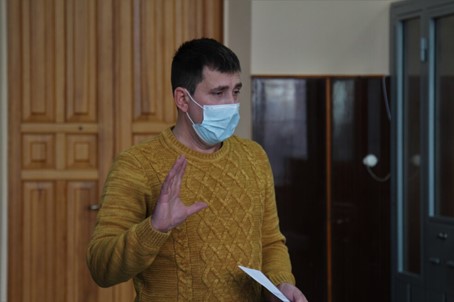 In September 2018, the Kyivsky District Court acquitted Trykhna on both counts and found the video of the meetings to be inadmissible main evidence (seemingly on procedural grounds).  The court also claimed that Holnyk’s cooperation in covert investigative activities had been “dubious behaviour” that was indefensible.

Both the prosecutor, Serhiy Mandych and Holnyk herself filed appeals against the ruling, and it was these that led to a very different result from the panel of three judges of the Kharkiv Court of Appeal on 24 January 2024.  During the appeal hearings, Holnyk had disputed both the grounds given by the original court for dismissing the videos as inadmissible, and the claim that her cooperation with the enforcement bodies had been unacceptable.

During the court debate, prosecutor Mandych stressed that it is precisely because of such corrupt dealings that there is widespread distrust in society both of the enforcement bodies and of the judiciary.

“Yes, it very seldom happens that such crimes are exposed, but it’s necessary to bring them to their conclusion and demonstrate to the public that we can expose these crimes and punish people for them”.

The court only partially allowed the appeal.  It found Trykhna guilty of having offered a bribe, and passed a four year suspended sentence, with a two year probation period.  It rejected the second charge of interference in Holnyk’s work aimed at obtaining a wrongful ruling. The panel of judges considered that the definition of ‘wrongful ruling’ is unclear in Ukraine’s Criminal Code, and the prosecution had not provided proof of this crime.

The court did allow the video recording as valid evidence, and found that Holnyk had acted entirely lawful, as a whistle-blower, exposing corruption. In summarizing the result,  Holnyk pointed out the court ruling, which is now in force, acknowledged that neither she, nor the law enforcement bodies, had carried out any provocation, and that she herself had acted in a way fitting of a judge who has received a bribe offer.

She points out the number of serious questions that remain.  Was the ruling, now overturned, by Kyivsky District Court judge Yury Kulish an example of stunning incompetence, or about lack of integrity?  The most important question, however, was: when will Mamay himself answer for his actions?

There are other questions as well, such as why it was the whistle-blower in this case, a judge who had acted with integrity and in accordance with her oath, who should have been subjected to harassment and persecution.  In January 2019, Holnyk wrote a blog, in the form of a public appeal to the then President Petro Poroshenko, calling on him to abolish the Oktyabrsky District Court.  She wrote then that the retaliations against her for her actions over the Mamay case had not only come from the Mayor’s people.  There had, she reported, been numerous attempts to bring criminal or disciplinary proceedings and defamation suits against her, with the president of the . Oktyabrsky District Court, Oleksandr Strukov making her life in the court hell.  She spoke of attempts to cut her pay, force her to take leave in the middle of winter and numerous disciplinary penalties, which she considers fabricated.

She had turned to the National Agency for Corruption Prevention almost immediately, however the latter had only reacted in the autumn of 2017.  The agency had, at least, found in her favour, and on its instigation, the Council of Judges turned to the High Council of Justice, calling on the latter to hold Strukov to account.  The High Council of Justice’s behaviour on many occasions has aroused concern, and this case was no exception.  HCJ could not find Strukov’s behaviour legitimate, but did confine itself to only a ‘severe reprimand’ with three months’ loss of supplementary payments.  The same body allowed a counter-complaint made by Strukov against Holnyk over a Facebook post and some other allegations.  This second ruling was later revoked by the Supreme Court’s High Chamber, but only after it had been used as grounds for preventing Holnyk from applying for a post in the Anti-Corruption Court.   Holnyk and her husband, Ihor Havrilenko, were also the victims of a vicious attack on 22 November 2017 which has never been properly investigated.