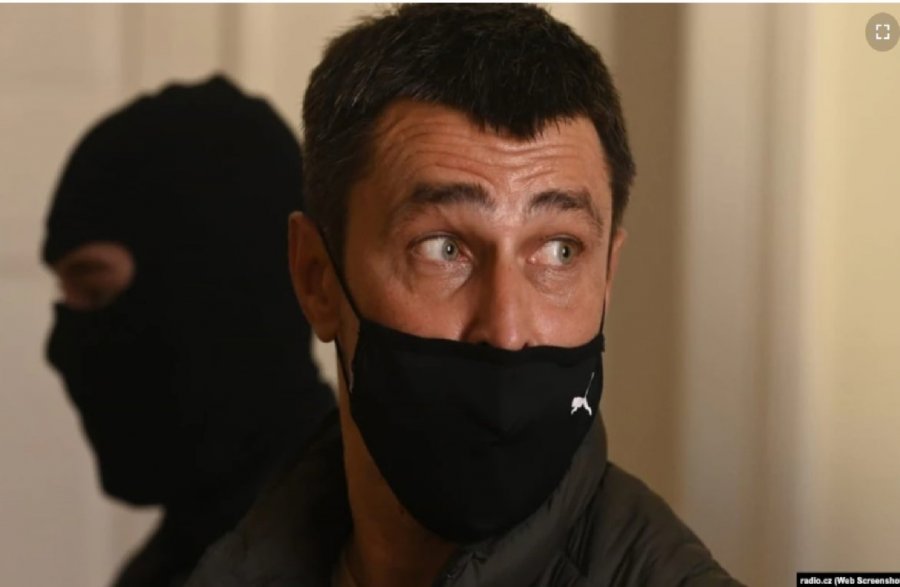 The Prague Municipal Court is due to decide in the middle of February whether Aleksandr Franchetti is to be extradited to Ukraine to face trial for his active role in Russia’s invasion and annexation of Crimea.  The Russian national with resident status in the Czech Republic is believed to have been one of the supposedly ‘Ukrainian self-defence’ paramilitaries who carried out much of the dirty work for the Russian soldiers without insignia who seized control in Crimea on 27 February 2014.

Olga Smirnova, writing for the Russian-controlled Sevastopol site ForPost, reported on 25 January that Franchetti, whom she described as “a participant of the Russian spring in Sevastopol” could be handed over to Ukraine in time for the anniversary “of the events of 2014”.  She and others claim, in very vague terms, that Franchetti will be in danger if extradited.  In fact, he faces a trial on charges of undermining Ukraine’s statehood, and there are no grounds for thinking that the Russian, whose case would be very public, would face any ill-treatment.

Smirnova quotes one of Franchetti’s former pro-Russian comrades, Andrei Sitnikov who expressed indignation, claiming that “in 2015 the Czech authorities did not see anything criminal about the union of Sevastopol and Crimea with Russia” and spoke of a supposed “offer of friendship and cooperation, addressed to the leadership of the two regions”.  It becomes clear from the following words that, rather than “the Czech authorities”, this ‘offer’ came from Milan Šarapatkа, a non-party affiliated MP, who was one of the far-right, extreme left and/or Eurosceptic, politicians whom Russia used to ‘observe’ and approve its illegal ‘referendum’ on Crimea.   While the Czech President, Miloš Zeman, has also aroused anger among many of his compatriots for his strongly pro-Kremlin position, the Czech authorities have taken a leading position among all European countries in prosecuting and handing down long sentences against individuals who fought for the Russian-controlled, armed and funded ‘Donetsk and Luhansk people’s republics’ and, generally, doing so on charges of terrorism.

It was reported at the time of Franchetti’s arrest on 12 September 2021 that the Ukrainian authorities had cooperated with their Czech counterparts to ensure that he was apprehended.  Franchetti has, since then, been held in detention.

On 18 December, Sitnikov posted an appeal from Franchetti to the Russian leadership.  Franchetti denies all the charges which he dismisses as ‘falsified’ and expresses indignation that the Czech authorities are taking them seriously.  In fact, there is a considerable amount of evidence against Franchetti, with much of it, in fact, provided by himself, in the course of various interviews, etc.  Franchetti also complains of numerous health problems and of the conditions in the detention unit, although his daughter earlier stated that the conditions were good.

During the over four months of his detention, Franchetti has changed his lawyer once, with a representative of the Crimean occupation ‘government’, Aleksandr Molokhov reporting that the Franchetti’s family ran up against problems since there are not that many lawyers in Prague willing to represent a person accused of such charges.

Franchetti was detained in the evening of 12 September 2021 at Prague Airport on the basis of an international warrant issued by Ukraine.  At the time, Molokhov called this “a dangerous precedent” and blamed it on what, he called, “a sharp activation in Russophobic forces in Eastern Europe” after the inauguration of the international Crimea Platform initiative.

Although many of the reports claim him to be a person from Sevastopol, the 48-year-old Franchetti appears to have been born in Voronezh (Russia), and to have lived for a lot of the time since the 1990s in the Czech Republic, working as a fitness trainer.

He is reported by Myrotvorets to have received the Russia state medal ‘For the return of Crimea’ in 2014, however Myrotvorets does not give any link to the source of this information.

The source could very easily have been his own interviews since Franchetti is one of many former Donbas militants or Crimean paramilitaries who have publicly boasted of their activities, thus providing Ukrainian prosecutors and the international courts with useful starting points for criminal charges.

In a September 2014 interview, Franchetti claimed that he had gone to Sevastopol on 25 February 2014 “out of love”, “to protect his girlfriend”.  This he supposedly did by becoming ‘commander’ of a group called ‘North Wind’ [“Северный ветер»] within the so-called Samooborona, or Self-Defence paramilitaries.  He called this a group of 12 ‘forest rangers and ‘tourists’ able to move stealthily about in the forest and “read tracks”.

The date of his arrival seems of significance.  On 26 February 2014, a huge demonstration by Crimean Tatars and other Ukrainians prevented Russia from carrying off an effective coup in the Crimean parliament.  It was in the early hours of the following morning that the Russian soldiers without insignia seized control of the parliament and airports.  Several politically motivated and surreal trials brought by the Russian occupiers against the Crimean Tatar leaders who had called the demonstration have inadvertently highlighted the sinister role played by Sevastopol paramilitaries brought in for a counter-demonstration on 26 February 2014.  It was also paramilitaries, like Franchetti and his men, who are believed to have been behind many of the abductions and torture of pro-Ukrainian activists; the killing of Reshat Ametov and the enforced disappearances (and probable killings) of several Crimean Tatar and other Ukrainian activists.

In Ukraine, Franchetti faces prosecution under Article 260 § 2 of the Criminal Code for the creation or participation in an unlawful armed formation and, if convicted, a sentence of from three to eight years.

There have also been other incriminating interviews, such as that in April 2015, with Dejan Berić [nom de guerre Deki], a fighter for the Russian / Russian-controlled militants in the so-called ‘Donetsk people’s republic’.

In July 2019, Czech Radio published a report entitled: Russian annexation of Crimea with a Czech footprint.  They had tracked down “the leader of a Sevastopol ‘intelligence group’ who has permanent residence in the Czech Republic where he works as a fitness trainer.  The report specifically mentions the interview given four years earlier, and quotes Franchetti as describing how his ‘North Wind intelligence group’ had “aimed to eliminate the penetration of various groups on the territory of Sevastopol. We divided the district into sectors where there were still patrols, both moving and immovable. We watched the surroundings, the movement of cars, unusual cars, we looked for shelters.”  He claimed (fairly implausibly) that they had not themselves had arms but had provided such information to the Russian Navy.  The 2019 Czech report notes that, like other paramilitaries, Franchetti and his group reported directly to senior Russian military officers, and quotes a Czech political analyst, Petr Pojman, as saying that the paramilitaries’ role in the invasion was as important as that of the professional Russian soldiers. Pojman went on to describe such groups, as that of Franchetti’s, as essentially terrorist, having taken part in the illegal occupation of Crimea and, as such, having committed acts of terrorism on Ukrainian sovereign territory.

Czech Radio cited a source within the security service as saying that Franchetti had had permanent residence in the Czech Republic since 2000.  In 2019, he was reported to be dividing his time between Prague and occupied Crimea.

When tracked down by the radio station, Franchetti claimed that he had travelled to Crimea, on 25 February 2014, all on his own initiative.  This, he alleged then, was because Ukrainians were planning a series of attacks and he wanted to protect Russian citizens.  He named incredible amounts of ammunition and firearms that he claimed his group had found and asserted that they had handed one group of supposed assassins to the Russian army.  He denied that he and his group had done anything illegal, as per international law.  Franchetti earlier asserted that Deki had been a member of his group in Crimea and that “it was thanks to him that we detained a quite large group of extremists – eleven people”.

There is no evidence that any such group or cache of arms ever existed, and the only recorded acts of violence were by paramilitaries or members of the Russian military.