Ukrainian seized and tortured by Donbas militants after returning for his elderly mother Donbas hostages tortured for a Russian propaganda program against Ukraine Mother with grave health issues imprisoned by Russian-controlled militants for trying to save her sonUkrainians tortured and imprisoned in Donbas for supporting Ukraine, with Russia blocking their release Elderly Donetsk hostage with hip fracture sentenced to 17 years for supporting Ukraine Russian-controlled militants sentence 70-year-old pensioner to 17 years for ‘spying’ after torturing him and his familyKherson journalist, imprisoned by the Russians, tells of killing, rape and torture of hostages Former child hostage spends 7th birthday in Russian captivity for wanting to live in free Ukraine Russia uses Kherson ‘evacuation’ for enforced disappearance of more Ukrainian hostages and POWs ‘Guilty’ of being Ukrainian: Teacher abducted by the Russian invaders and held incommunicado for six months Silence abets Russia in torturing and risking the lives of Ukrainian hostages and POWs in occupied DonbasAbducted 16-year-old was forced to clean up after Russian invaders" torture of Ukrainian POWs and hostagesRussia abducts 25 volunteers delivering humanitarian aid to Mariupol, threatens to put them ‘on trial’ Russia extends terror and abductions from occupied Crimea and Donbas to all of Ukraine Russian invaders torture and threaten to kill civilian hostage in revenge for their military losses Ukrainian POWs and abducted civilian hostages illegally imprisoned in Russian-occupied Crimea Russian invaders abduct Mayor of Prymorsk Oleksandr Koshelevych after first taking his elderly father hostage Russian Rule of Lawlessness in Occupied Crimea and DonbasRussian invaders take Mariupol intensive care hospital and its patients hostage Russia kills Minsk Agreement, with lives of over 300 Ukrainian hostages and POWs in danger
• Topics / The right to liberty and security 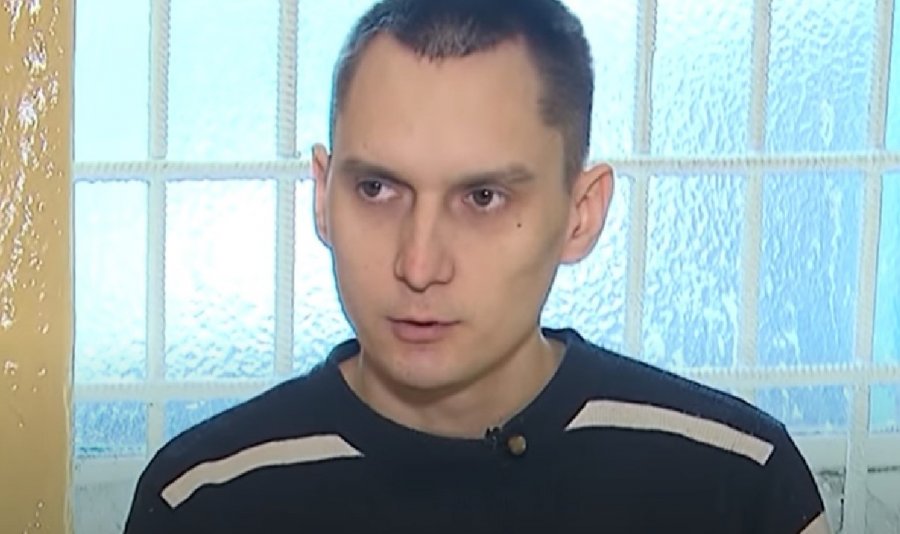 Andriy Harrius , screenshot from the militant video in February 2019

Andriy Harrius was seized by militants from the self-proclaimed and Russian-controlled ‘Donetsk people’s republic’ [‘DPR’] on 11 December 2018 and has been held prisoner ever since.  The 33-year-old former police driver, whose wife was about to give birth to their second child, is claimed to have been planning acts of sabotage for Ukraine’s Security Service [SBU] and could be sentenced by an illegal ‘court’ to death or life imprisonment.

Ukraine’s Ombudsperson Liudmyla Denisova, reports that, until 2014, Harrius had lived in Krynychna, near Makiyivka in the Donetsk oblast.  When the area was seized by the Russian / Russian-controlled militants, he moved to the Dnipropetrovsk oblast where he married.

He had difficulty finding work and, since he needed to provide for a growing family, they moved back to Krynychna and were living there when Harrius disappeared on 11 December 2018.   The following day, militants arrived at the family’s home, with Harrius who, according to his wife, Viktoria, could scarcely speak and showed visible signs of having been beaten.  The militants turned the place upside down, stole anything of value, and took Harrius away again.  Viktoria gave birth days later in the train from Mariupol to Lviv, after she fled occupied Donbas, with their elder child and Andriy’s mother.  The latter was clearly only visiting as she and Andriy’s father also left after the area was seized and live in the Kherson oblast.

On 1 February 2019, the so-called ‘DPR police’ reported that they had arrested three men who were claimed to have been “involved in carrying out a series of terrorist acts and sabotage” in DPR.   The ‘arrests’ were very widely reported in the Russian state media, with certain telling propaganda embellishments, such as the claim that the three men: Harrius; Yury Ivanov and Stanislav Surovtsev had been trained “by instructors from the USA and Canada”.  The ‘DPR militants’ asserted that the three men had been “recruited’ and carried out the orders of their ‘SBU handlers’ on the territory of the so-called DPR.  The original report claimed that Ivanov had been on a special training course on sabotage and terrorist acts in the Mykolaiv oblast, and that he had been helped by Harrius and Surovtsev.  It was further claimed that 40 kilograms of explosives, detonators, etc. had been found during one of the militants’ ‘searches’.

As in all such cases, whether in Russian-occupied Crimea or in the proxy Donbas ‘republics’, the only ‘’evidence’ is provided by videos, showing alleged explosives, etc. and the ‘confessions’ of men entirely under the control of the militants.  We know from former hostages released in the very few exchanges of prisoners, that all such ‘confessions’ were provided after horrific torture, with the militants making it quite clear what the men (or, in some cases, women) would face if they did not repeat the words required of them.

In this case, the ‘confessions’ are to purported work for the SBU, with it asserted that the men’s involvement in a number of acts of sabotage “has been established”.  Although it is effectively standard that the hostages shown in such videos ‘admit’ to working for the SBU, the militants clearly want to ensure that nobody thinks that such alleged cooperation was for patriotic motives.  Here the men say that their actions were purely for money and that they did not even see very much of this.

All of the reports speak of the men facing either the death penalty or life imprisonment.  That was at the beginning of 2019, yet there does not appear to have been a ‘sentence’ yet.

Harrius appears to be imprisoned in SIZO [remand prison] No. 5 in occupied Donetsk where the 33-year-old is receiving no medical treatment for serious medical complaints.  His family have no direct contact with him, but, at least earlier, were able to get a parcel, with basic food items, etc., to him once every three months via friends still living in ‘DPR’.  According to Denisova, Andriy is not, however being passed the medication that his family organize for him.

There are known to be at least 300 Ukrainian hostages and prisoners of war in occupied Donbas, although the real figure is likely to be much higher