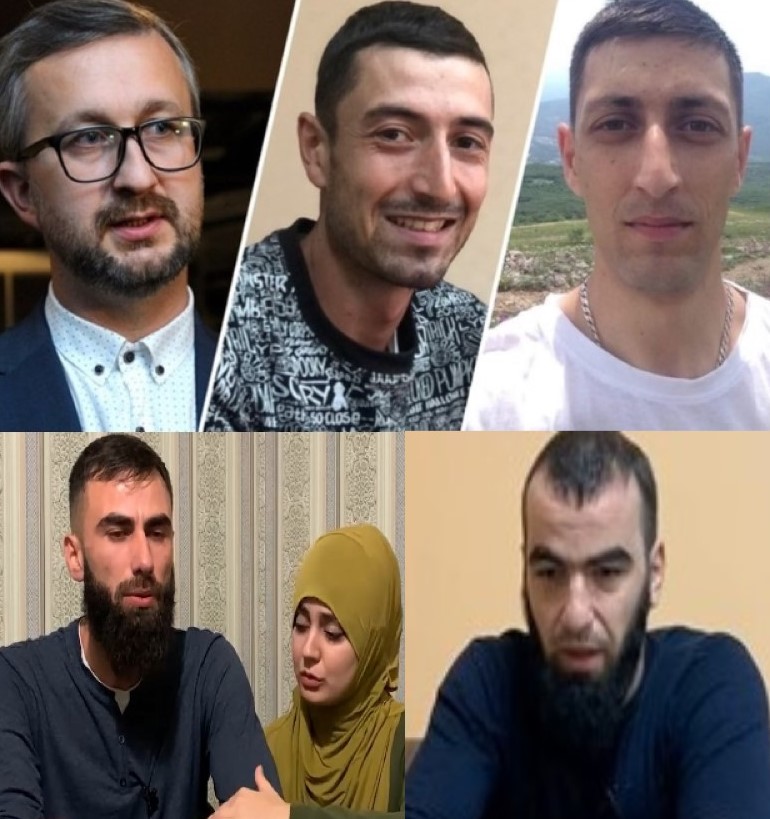 Russia’s FSB intensified its use of torture in fabricating criminal charges against Crimean Tatars and other Ukrainians in 2021, with the charges against Crimean Tatar Mejlis leader Nariman Dzhelyal and two other men based solely on ‘evidence’ obtained through such means.  The fact that this is a coordinated attack on Crimean Tatars and that the FSB are certain of their impunity seems confirmed by the absurd means used by the Crimean Investigative Committee to avoid investigating complaints of such torture.

One such method was reported by lawyer Emil Kurbedinov on 3 February, together with a copy of the opus signed by Aleksandr Andreevich Viatkin from the Military Investigative Department.  This was in response to a clear report of a crime committed by the FSB officers who effectively abducted Kurtumer Chalgozov on 14 December and used torture and threats of imprisonment to get him to agree to secretly collaborate with the FSB by providing false testimony against others.  A formal report of a crime needs to be investigated, so Viatkin, instead, called the report “a citizen’s appeal”, so that he can get away with writing a fob-off letter, no more.  Kurbedinov notes that he and the people he represents have sent very many such reports of abductions, torture and other abuses of power by officials since 2014, with all of them effectively “flushed down the toilet”.  All of this, however, will eventually end, he adds, and then they will answer for all of their deeds.

It is worth noting that the US State Department earlier imposed sanctions on Andriy Sushko, the Ukrainian traitor turned FSB officer involved in the abduction and savage torture of Rinat Paralamov in September 2017.  It is crucial that those implicated in the persecution of Nariman Dzhelyal and two cousins -  Asan Akhtemov and Aziz Akhtemov are also subjected to Ukrainian and international sanctions.

Two Crimean Tatars so far have found the courage to go public about the torture they were subjected to in December 2021 while held incommunicado by FSB officers.  Nariman Ametov spoke out four days after he was taken from his home, in handcuffs and with a bag over his head.  He was savagely tortured, including with electric currents passed through his body. One of his torturers, who identified himself as ‘Maksym’, told him that “here you have no rights” and said that he had come to Crimea “to crush the likes of” Ametov. This individual assured Ametov that he would force him to say whatever he demanded and that he could do what he wanted without suffering any consequences.  Two weeks later, Kurtumer Chalgozov also went public.  Both received huge support from the Crimean Tatar community, with all well aware how terrifying it is to buck the Russian FSB.

During the January online meeting of Crimean Solidarity, both Kurbedinov and Dzhelyal’s lawyer Nikolai Polozov spoke of the torture used to fabricate the case against Dzhelyal and to force Crimean Tatars to provide false testimony.  As reported, ‘the case’ against Dzhelyal and the Akhtemovs is based on the ‘testimony’ of three ‘secret witnesses’ and on ‘confessions’ that the Akhtemovs retracted once, under pressure from the European Court of Human Rights, they were finally allowed to see independent lawyers.

Kurbedinov spoke of the huge role played in fighting FSB methods in the disclosures from Ametov and Chalgozov.  He stressed that other victims who believe that the FSB will leave their alone once they receive a single signature (to a false witness statement) are mistaken.  The FSB will come back for more such ‘testimony’ and quite likely demand that these people act as ‘secret witnesses’ in court.

Essentially all Russia’s political trials of Crimean Tatars and other Ukrainians hinge almost entirely on ‘secret witnesses’ whose testimony cannot be verified and who, as Kurbedinov stressed, may not even know the people they are testifying against.  In 2020, similar use by the Russian Federation of anonymous witnesses was declared in violation of the right to a fair trial by the European Court of Human Rights, and the practice was strongly condemned by the UN Secretary General in his 2021 report on occupied Crimea.

While such ‘secret witnesses’ have been used to sentence innocent men to 15-20 years’ imprisonment since 2015, the Dzhelyal case does appear to be setting a new and very sinister precedent.

The preliminary hearing in the ‘trial’ of Dzhelyal and the Akhtemovs is likely to begin within a week at the Russian-controlled ‘Crimean High Court’.  The preliminary hearing is always behind closed doors, however Polozov fears that Russia will seek to have the entire process held in secret in order to muffle this totally fabricated case and enable their lawlessness.

Revenge for Crimea Platform and informing the world about repression

Russia responded with hysteria in 2021 to the inauguration of the important Crimea Platform international initiative and with open threats, including against Nariman Dzhelyal.  He was one of several leaders of the Mejlis, or self-governing body, of the Crimean Tatar people, who took part, together with high-ranking representatives of 45 countries.  He was also the only leader still living in Crimea, following earlier repressive measures against others and was always aware that they would likely come for him.

The FSB came less than two weeks after the Crimea Platform’s inauguration.   Dzhelyal was the last of five Crimean Tatars to disappear after being taken away by the FSB on 3 or 4 September, with nothing known of their whereabouts until late on 4 September.  As mentioned, it was almost 10 days later, after the European Court of Human Rights intervention, that Asan and Aziz Akhtemov were finally able to see independent lawyers.  They promptly retracted ‘confessions’, providing harrowing accounts of how these had been tortured out of them.

It was only late on 4 September that the whereabouts were learned of Eldar Odamanov, taken away early on 3 September and of Shevket Useinov, seized during the same armed raids in the night as Asan and Aziz Akhtemov. Both Odamanov and Useinov were held incommunicado until 5 September, before being jailed for 10 and 15 days on absurd charges.

Nariman Dzhelyal; Asan and Aziz Akhtemov have been imprisoned since 4 September, 2021.  The charges against all of them have become increasingly more severe, carrying sentences of up to 20 years.  At least the first escalation in the charges against Asan Akhtemov came immediately after he gave a detailed account of the torture used.

There is no real proof that an act of sabotage was committed on 23 August 2021, and nothing, except ‘secret witnesses’, to link Dzhelyal, who was at the Crimea Platform inauguration that day, or the Akhtemovs with any such activities.