Russia rages as plans for legitimizing its proxy Donbas “republics” are foiledZelensky fires adviser who condemned legalization of Russian-controlled Donbas militantsUnderhanded agreement for direct dialogue with Donbas militants is a red line Zelensky promised not to crossUkraine may wake to find Zelensky has capitulated to Russia on water to CrimeaStark warning that Russia could use military force to get water for occupied CrimeaUkraine will give Crimea away forever if it starts selling water to its Russian occupiersBy renewing water supplies to Crimea, Ukraine would make Russia’s illegal occupation permanentThreats of prosecution to silence protest over new toxic emissions from Crimean Titanium factoryCrimean Chemical Disaster will happen again while Ukraine helps oligarch Firtash bypass sanctionsFactory behind Crimea Chemical Disaster in Armyansk demands Russia prosecutes UkraineCrimea Chemical Disaster – Russia takes 2 weeks to evacuate children amid information vacuumRussia’s Crimea Bridge Could Collapse AnytimePutin’s Kerch Bridge to Crimea: No Money, Dodgy Insurance & No AccountabilityRussia’s Bridge to Crimea: Quick Profits for Putin’s Crony, Zero AccountabilityRussian NGO in trouble for warning tourists about risks of visiting occupied CrimeaUkraine makes first arrest of boat illegally entering Crimean portGermans ignore international embargo against Russian-occupied CrimeaUkraine can demand the arrest of ships which enter Crimean portsTransport blockade can help return Crimea to UkraineECHR could take years to reach judgement on annexation of the Crimea
• Topics / Politics and human rights 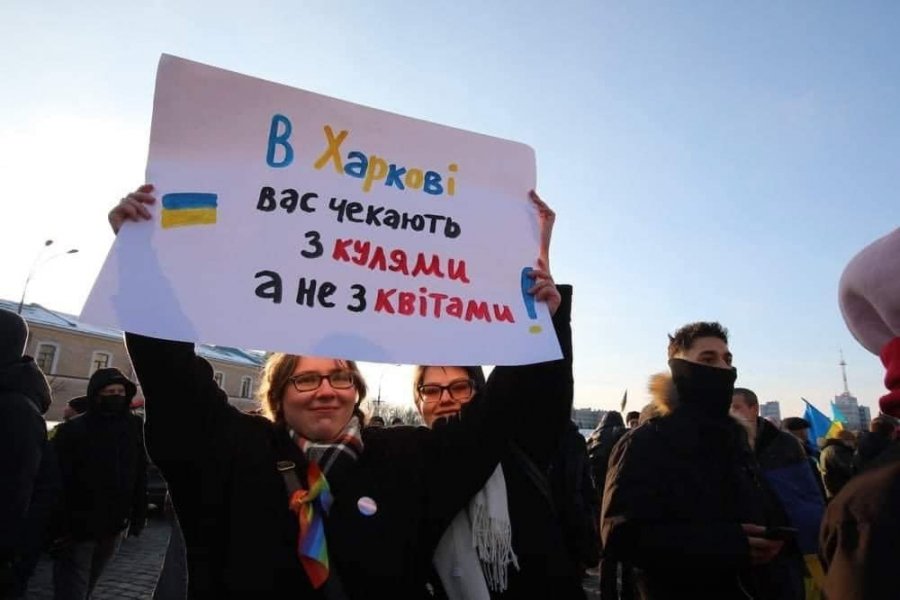 In Kharkiv you are awaited with bullets, not flowers! Pro-unity demonstration on 6 February 2022 Photo posted by Tetiana Bezruk

A recent survey has found that a fairly large majority of Ukrainians view the conflict in Donbas as Russian aggression, with this number having increased significantly over the past six months.  The results show very little support for direct negotiations with the self-proclaimed ‘Donetsk and Luhansk people’s republics’ [‘D-LPR’] and even less for recognizing their autonomy within Ukraine.  The findings come amid renewed fears that Russia’s build-up of troops on the border could be used to pressure Ukraine’s leaders into agreeing to direct negotiations with fake ‘republics’ which take their orders entirely from Moscow.

The survey was carried out by the authoritative Democratic Initiatives Foundation and Razumkov Centre from 17 to 22 December 2021, with a representative selection of respondents from all parts of Ukraine, except occupied Crimea and Donbas (i.e. ‘D-LPR’].

One of the questions asked was whether respondents considered that the conflict in Donbas had been started by Russia or by the Ukrainian government and oligarchs (with a third option being ‘hard to say’ or ‘neither’).  65% overall consider Russia to be responsible, with only 15% in the country as a whole seeing the conflict as internal. There was, as always, a regional divide, with the West (89%) and Centre (74%) much more likely to put the blame on Russia, than the South (44%) and East (39%).  Yet even in the East, this was still a relative majority, with only 33% viewing the conflict as internal (caused by the Ukrainian government and oligarchs).

DIF reports that 68% consider the conflict in Donbas to be Russian aggression with the use of local fighters, and notes that this is an increase of 14.5% since May 2021.

With respect to the section on ways of achieving lasting peace in Donbas, Ukrainians very clearly do not support the line taken by Moscow.  According to DIF, support for the first two methods mentioned has been fairly stable since the beginning of the conflict, with 20% in support of intensifying diplomatic pressure and sanctions against Russia and 19% believing that lasting peace will be achieved through the strengthening of Ukraine’s economic and military potential.

Only 14% overall supported direct negotiations with the occupation administrations (‘D-LPR’) and recognition of them as legitimate.  8% named rejection of membership of NATO, while only 4% were willing to agree to autonomy of Donbas and the loss of Crimea, and a mere 2% thought it possible to accept Russia’s annexation of Crimea “in exchange for peace in Donbas”.  A relative majority (48%) thought that providing Ukraine with weapons and holding joint military exercises with EU and NATO member states would probably restrain Russian aggression.  This was against a fairly hefty 33%, who fear that it would probably provoke Russia.

An absolute majority (54%) want to see occupied Donbas restored as it was before the war, with only 13% supporting the area’s autonomy and 10% - some other form of greater independence from Kyiv.  There is almost no support (3%) for ‘D-LPR’ becoming independent or joining Russia, with this position having remained largely stable.

On 5 February, Dzerkalo Tyzhnia  reported that representatives of the pseudo ‘republics’ had sent a letter, claiming that Andriy Yermak, Head of the Office of Ukraine’s President Volodymyr Zelensky, has agreed that Ukraine will provide written response to proposals for peace put by the ‘D-LPR militants’.  The letter cites Russia as the source of this highly explosive claim. As Dzerkalo Tyzhnia pointed out, “if “the representatives” of D-LPR are not lying, then it turns out that in Paris, the Ukrainian party essentially promised not only to sit down at the same negotiating table with “representatives” of the illegal pro-Russian formations, which the Kremlin has for a long time been trying to achieve, but to even imagine “a written response” to all proposals from D-LPR by 9 February. That would, effectively, means Ukraine’s de facto recognition of D-LPR as a party to the negotiations and the conflict, that is, recognition that the conflict in Donbas is internal, and not inter-state”.

The newspaper has asked that its text be viewed as a formal request for information from those in power as to whether this really is the case.

Russia has indeed been pushing for such ‘direct dialogue’ for a very long time, and this would not be the first time that Dzerkalo Tyzhnia  had sounded the alarm over apparent willingness by the Office of the President, and specifically, Yermak, to agree to them.  On 13 March 2020, the newspaper reported that there had been a meeting of the Trilateral Contact Group in Minsk on 11 March at which a preliminary agreement, endorsed by Yermak, had envisaged the formation of an ‘Advisory Council’, with 10 representatives from Ukraine and 10 from the self-proclaimed ‘Donetsk and Luhansk people’s republics’ [D/LPR].

In the face of public outrage, the plan was abandoned.  Yermak had tried to claim that no direct dialogue had been planned with Russia’s proxy ‘republics’, and that this had been about ‘dialogue’ between Ukrainians in government-controlled Ukraine and their fellow citizens in occupied Donbas.  His claims were dismissed by prominent Ukrainians, including many former hostages, such as Stanislav Aseyev, Iryna Dovhan, Ihor Kozlovsky and Volodymyr Zhemchugov.   There were numerous protests with all unanimously rejecting any direct negotiations with proxy-republics as inadmissible recognition of formations that are totally controlled by the Russian aggressor state. By treating the Donbas militants as autonomous players, it was warned, Russia and the international community would be able to treat the armed conflict on Ukrainian territory as “an internal conflict”, and not the result of armed aggression by the Russian Federation against Ukraine”.

It is very clear from the above survey that the majority of Ukrainians know who has caused the conflict in Donbas, and that, regardless of the wish for an end to the conflict, there are compromises that Ukrainians reject as unacceptable.