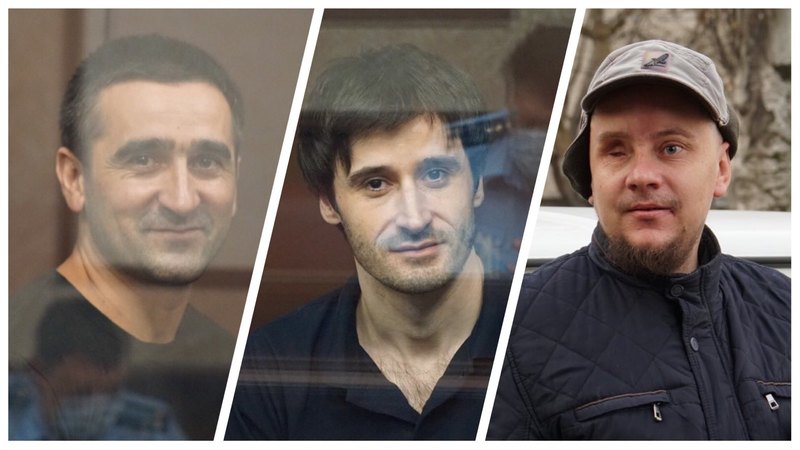 It has long been clear that Russia’s FSB feel confident of total impunity to use torture, faked evidence and other illegal methods in order to fabricate criminal prosecutions in occupied Crimea. The latest trial of three Crimean Muslims from Bakhchysarai has, however, hit new depths in cynicism, with Oleksandr Sizikov (b. 1984), the person designated ‘organizer’ of a supposed ‘terrorist’ group, totally blind and disabled.  The FSB were presumably confident of a Russian court’s willingness to avoid uncomfortable questions when they claimed to have found ‘prohibited literature’ that Sizikov was unable to read during the armed ‘search’ of his home on 7 July 2020.

On 30 March, staff from the Russian penitentiary service added their bit to this travesty by asking the Southern District Military Court in Rostov (Russia) to remand Sizikov in custody.  They justified their wish to imprison a man who has extremely limited mobility and cannot see by claiming that he had infringed the requirements of his house arrest.   The official asserted that Sizikov had, on 7 and 8 January 2022 left his home and had not answered phone calls.  This alleged ‘offence’, it had transpired, was because Sizikov was visiting his grandmother.

Sizikov’s lawyers Safiye Shabanova objected.  She pointed out that Sizikov is blind and has Group 1 disability status which should preclude his being held in a SIZO [remand prison].  She added that Sizikov had no choice but to leave his home, in order to attend the court, to go to the shop, or to visit his elderly and ill grandmother.  She pointed out that there was no question of him not returning on each occasion and nothing at all to suggest that he would try to hide.  It would make more sense, she suggested, to change the preventive measure against him to one merely prohibiting specific actions, not a total ban on leaving his home.

The application to imprison Sizikov was supported by prosecutor Vladislav Viacheslavovich Kuznetsov, but was, at least, rejected by the judges at the Southern District Military Court in Rostov.

Oleksandr Sizikov (b. 1984) is on trial with two Crimean Tatar civic activists Seiran Khairedinov (b. 1986) and Alim Sufianov (b. 1990). Despite charges that carry a sentence of 10-20 years’ or life imprisonment, the men are accused solely of involvement in Hizb ut-Tahrir, a peaceful transnational political and religious organization which is legal in Ukraine and most countries.  Russia’s Supreme Court declared it ‘terrorist’ in February 2003, without explaining why and without informing the organization and human rights NGOs of the ruling until it could no longer be challenged.

Since 2015, Russia has been using ‘Hizb ut-Tahrir  charges’ as a weapon against Crimean Tatar and other Ukrainian civic journalists and activists, and this case is no exception.  Sizikov, in particular, had regularly attended (with others’ help) armed searches and political trials, and he had also held solitary pickets, with a placard reading ‘The disabled against arrests of Crimean Muslims’, following the arrest of political prisoner Edem Smailov.  The latter had cared for him following the terrible accident in 2009, when he was hit by a car, while cycling, that left him totally blind and unable to move without assistance.

The armed and masked officers who carried out ‘searches’ of the men’s homes on 7 July 2020 were very clearly only looking for ‘prohibited literature’.  The families of both Khairedinov and Sufianov said at the time that the FSB had claimed to ‘find’ literature that they had, in fact, brought with them.  In Sizikov’s case, it is clear that the book found was either planted, or had been lying in the house since at least 2009, five years before Russia’s invasion and annexation of Crimea, since it was not in Braille.  As mentioned, Hizb ut-Tahrir is perfectly legal in Ukraine, nor does the latter have a list of ‘prohibited literature’.

Russia is accusing Sizikov of being the ‘organizer’ of a supposed ‘Hizb ut-Tahrir group’,  This is the more serious of the charges, falling under Article 205.5 § 1 of Russia’s criminal code and carrying a sentence of up to life imprisonment.  Sufianov and Khairedinov are accused of having been ‘involved’ in the alleged group, with the charge under Article 205.5 § 2 carrying sentences from 10 to 20 years.  All three men are also charged, under Article 278, with ‘planning to violently seize power’.  While this charge may seem especially insane in the case of a blind and disabled man, it has become a standard part of the FSB’s arsenal and is essentially always surreal.  In a recent case, the prosecution ‘justified’ the charge by claiming that the men had been planning a state coup via ‘“the total Islamization of the population”.   In this case, the prosecution claims that the three men tried, as purported members of Hizb ut-Tahrir , to sow division in society “through militant Islamic propaganda”.  Sizikov is supposed to have been the organizer of a group which purportedly “carried out covert anti-constitutional activities through exerting influence on people’s religious feelings; organized and carried out meetings of the group, so-called ‘khalakaty’; looked for new participants and circulated the ideas”.

None of the above, even were the charges true, has anything in common with terrorism, yet Russia is currently sentencing those men it designates ‘organizers’ to 18-20 years, and those accused of ‘involvement’ to 12-16 years in the worst of Russian penitentiary institutions.  Khairedinov and Sufianov have been imprisoned since 7 July 2020, while Sizikov was placed under house arrest.  The same court in Rostov recently sentenced Edem Suleimanov to 12 years’ imprisonment despite a heart condition which would make it unlikely that he would survive the first month in a Russian prison, so there are real grounds for fearing that Sizikov could also receive such an effective death sentence.