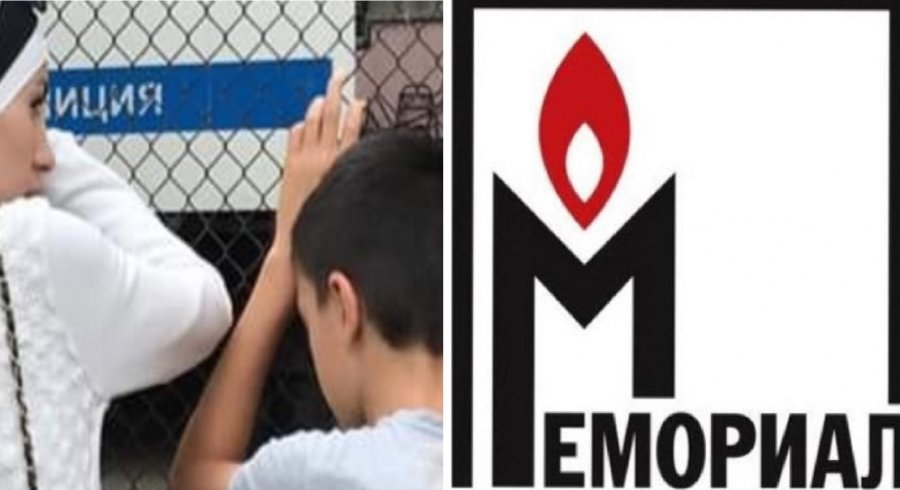 A child, waiting with his mother, for a glimpse of his arrested father Photo Crimean Solidarity, Memorial

The renowned Memorial Human Rights Centre has reported that it added a thousandth person to its list of political prisoners in January 2022.  The report coincided with the arrests of four more Crimean Tatar civic activists on 9 February, with this only one of many reasons why the real list of illegally imprisoned Russians and Ukrainians from occupied Crimea is likely to be considerably longer.

Memorial began keeping the list back in 2009, with the number of Ukrainians on it increasing steadily since 2014.  The thousandth political prisoner is Anatoly Gorbunov, a 64-year-old Jehovah’s Witness from Krasnoyarsk who was sentenced on 2 February to six years’ imprisonment for practising his faith. He is one of an ever-mounting number of Jehovah’s Witnesses, including four Ukrainians from Crimea, who have been sentenced to long terms of imprisonment since Russia’s Supreme Court outlawed this world faith in April 2017, claiming it to be ‘extremist’.

Sergei Davidis, head of Memorial’s Support for Political Prisoners program, stresses that the thousandth prisoner is essentially a symbolic milestone as the real number is significantly higher.  By no means all political prisoners end up on their list, however even at one thousand, the list would be much too long.  These are all people, Davidis stresses, whose lives have been shattered by politically-motivated and unlawful persecution by the state.

There are two main lists: general political prisoners, and those persecuted in connection with their faith.  The distinction is not, in fact, so clear, as can be seen in the situation in occupied Crimea.  Around 85 Crimean Tatar or other Ukrainian Muslims are either serving horrific sentences or awaiting them on charges linked with alleged yet unproven involvement in the peaceful transnational religious and political organization Hizb ut-Tahrir.  The organization is legal in Ukraine, and most other countries, and Russia has never explained why it has designated an organization not known to have committed acts of terror or violence anywhere in the world to be ‘terrorist’. Since Russia is using these conveyor belt prosecutions as a weapon against civic journalists and activists, it is not easy to decide which takes precedence, religious intolerance or political persecution.

Since Russia’s arrests of 25 civic journalists and activists on 27 March 2019 aroused international condemnation, the FSB have slightly changed their behaviour.  The number of arrests has not decreased, however it has become harder to follow many separate cases, with one or two defendants.  This is probably the main reason why Memorial has yet to declare all those arrested thus far to be political prisoners.  It is clear that this is merely a matter of time since even in the case of Russian Muslims, Memorial considers that all those convicted merely of involvement in Hizb ut-Tahrir are political prisoners.  The situation in Crimea gives added grounds, both because Russia is using Hizb ut-Tahrir  charges as a way of trying to crush the Crimean Tatar human rights movement, and because Russia is in violation of international law by applying its repressive legislation on occupied territory.

The Memorial lists have also included several Ukrainians who are not from Crimea, although here too the list is far from complete.  One reason is that on many occasions, the people have been held incommunicado and prevented from seeing independent lawyers, with this enabling the FSB to put pressure on them to admit to the charges.  This was, for example, the case with Valentin Vyhivsky who was tricked into going to Crimea in September 2014 and taken by force to Moscow.  He has now been imprisoned for almost eight years, and is held in virtual solitary confinement.

Memorial HRC’s fearless courage in monitoring and informing about political and religious persecution is a major reason why the renowned human rights NGO is facing forced dissolution, together with the International Memorial Society. In both cases, purported infringements of Russia’s notorious Law on Foreign Agents were cited in November 2021 in applications to the Supreme Court to get International Memorial dissolved, and to a Moscow court against Memorial HRC. It was, however, always clear that this was merely a pretext for the latest, albeit most serious, attack on organizations that are not to the liking of Russian President Vladimir Putin’s regime.

With respect to Memorial HRC, the Moscow prosecutor actually used a separate weapon as well, one with major implications for occupied Crimea.  It claimed that the NGO’s materials contain “elements of the justification of extremism and terrorism”.  The material in question would appear to be Memorial’s list of political prisoners and its reports on individual cases, where Russians, Crimean Tatars and other Ukrainians are imprisoned as Jehovah’s Witnesses or for alleged involvement in Hizb ut-Tahrir.  The application asserted that “the activities of these organizations are presented by the authors as legitimate and acceptable, and participation in their activities as one of the forms of exercising the right to freedom of faith…. The given material is aimed at forming in an undefined circle of people the impression that it is acceptable to carry out terrorist and extremist activities, namely the activities of international extremist and terrorist organizations and participation in them

This nonsense was produced by two individuals without any expert knowledge and with either no academic publications at all, or just three, and none in the relevant field.  There were also very serious questions as to why their ‘opinion’ had been sought back in December 2020, and how it had been presented within a day or two of being commissioned. Natalia Nikolaevna Kryukova is a maths teacher and co-founder of the Centre for Socio-Cultural Expert Assessments ["Центр социокультурных экспертиз"]  for which Alexander Yevgenyevich Tarasov, a philologist and translator, also provides unqualified ‘opinions’.  The Centre has earned its very shady reputation through politically motivated ‘assessments’ written to fit the prosecution’s charges in the persecution Yury Dmitriev; the Jehovah’s Witnesses and, earlier, the Pussy Riot punk group.  The civic watchdog Dissernet has provided details about five dodgy assessments given by each of these two individuals, but the number is, in fact, much higher.

Despite ample evidence provided by the defence of these alleged ‘experts’ shady credentials, plagiarism, etc.,  judge Mikhail Yurievich Kazakov from the Moscow City Court refused to summon them for questioning.

He then, on 29 December, allowed the prosecutor’s application for the dissolution of Memorial HRC, just as the Supreme Court had ruled in the case of International Memorial on 26 December.  These were evidently political decisions handed down ‘from above’, and there seem no grounds for optimism about the appeal hearings due shortly.

The situation is not yet hopeless, however, as, on 29 December, the European Court of Human Rights applied Rule No. 39, halting Russia’s implementation of the above rulings,

The Memorial Human Rights Centre has been one of the main sources of information and voices in defence of political prisoners in Russia and occupied Crimea.  Its closure would be a double blow to those in occupied Crimea facing mounting repression.  Not only would it destroy one of the only sources of information about what is happening under Russian occupation, but the claim that the NGO’s recognition of law-abiding Muslims, Jehovah’s Witnesses or others as political prisoners ‘justifies’ ‘terrorism’ or ‘extremism’ could soon be used as a weapon to silence others who speak out in defence of victims of persecution.