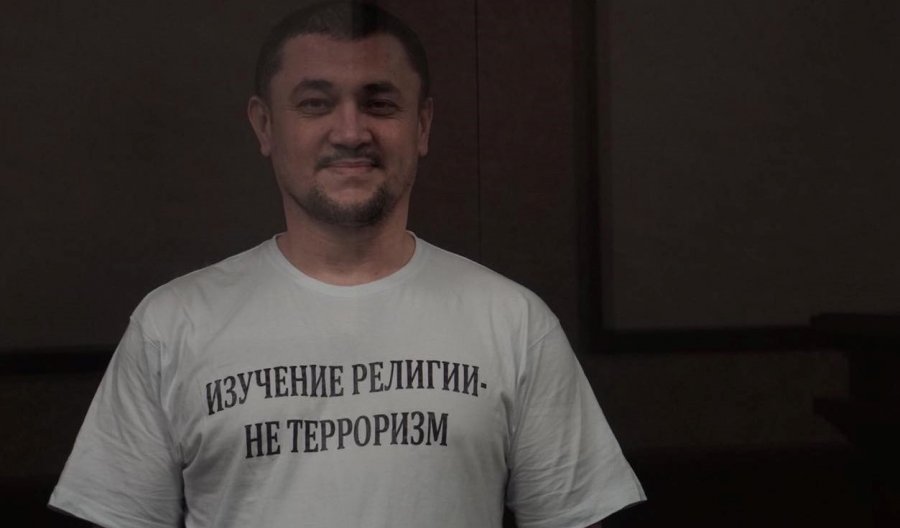 A Russian court has sentenced 41-year-old Vadim Bektemirov to 11 years’ imprisonment on ‘terrorism’ charges although he was not accused of anything even remotely linked with such crimes.  As the defence pointed out , Bekemirov was essentially accused only of ‘thought crimes’, with the ‘evidence’ produced proving only that the religious scholar both studied and discussed his faith.  The sentence is especially shocking as the main ‘witness’ for the prosecution  is an FSB agent who has been used, under different pseudonyms, in at least six such ‘trials’.

In his final address before the sentence on 11 February, Bektemirov was quite clear why he, and fellow Crimean Tatars, are imprisoned.

“Today I and many of my fellow Crimean Tatar Muslims are on trial for extremism without any violence, for terrorism without any terror. I have been deprived of my liberty in the absence of any elements of a crime, with the aim being to stop my religious activities and also crush my civic activism.”

“It is worth noting that from the moment when my people returned to their historical homeland right up to 2014, while in Ukraine’s legal realm, there was not one religiously motivated crime. Multinational Crimea lived in peace and harmony, and we heard about extremism, terrorism and acts of terror solely from the television, and then from Russian channels…”

All of this changed in 2014, he says, with life in Crimea becoming like a prison colony and with the Crimean Tatar people yet again the victim of the ruling regime.  He points out that Crimea has now become the record-breaker in Russia’s prosecutions of Muslims, and, seeing the way these sentences are handed out, you cannot help but conclude that these are “political reprisals against an entire people”.

It should be stressed that Bektemirov’s assessment is, broadly, shared by Ukrainian and international human rights NGOs.  It became clear soon after Russia’s invasion and annexation of Crimea that the Crimean Tatars, and their Mejlis, or self-governing body, were under particular attack.  Of well over 80 Crimean Tatar and other Ukrainian Muslims imprisoned on essentially identical charges to those against Bektemirov, most are civic journalists and / or activists who refused to look away while others were facing persecution.

Bektemirov is a graduate in Islamic Studies (specializing in Arabic literature and humanitarian sciences), but worked as a translator to support his family.  He also led prayer meetings in support of political prisoners; attended politically-motivated court hearings and helped in gathering and sending food parcels to political prisoners held in occupied Crimea or Russia.  This was more than enough for the FSB to come for him, and on 7 July 2020, Bektemirov became one of seven victims, almost all of whom were civic activists.

Bektemirov’s third child and first son was born 19 days after his arrest.  Despite the lack of any grounds for his detention, he was prevented from being present at the funeral of his father who died of a heart attack two weeks after armed and masked ‘enforcement officers’ had burst into the family’s home and then taken his son away.

He was accused only of unproven involvement in the peaceful transnational Islamic party Hizb ut-Tahrir which is legal in Ukraine and most countries.  It is likely that the Russian Supreme Court’s secret ruling in 2003, finding Hizb ut-Tahrir ‘terrorist’, was passed for political reasons, with Moscow looking for a way of forcibly sending Uzbek refugees back to Uzbekistan where they faced religious persecution. The lack of any proper explanation, or grounds under Russian legislation, for labelling Hizb ut-Tahrir terrorist, is just one of the reasons why the renowned Memorial Human Rights Centre considers all Muslims convicted merely of ‘involvement’ in this organization to be political prisoners.  In the case of Crimean Muslims, Memorial also points out that Russia is in grave violation of international law by applying Russian legislation on occupied territory and imprisoning Crimeans in Russia.  In declaring Bektemirov a political prisoner, Memorial wrote that he was being persecuted for peacefully practising his faith and that “he has been deprived of his liberty despite the absence of elements of a crime, in order to stop his religious activities, and also to crush civic activism in annexed Crimea.”  They noted that “Vadim Bektemirov is not accused of planning or of carrying out a terrorist attack, or of making terrorist threats or calls to violence. Instead of this, the indictment mentions such evidence as participation in a meeting of believers and invitation of new people to this; discussion of religious topics; and reading of Islamic literature.”

Bektemirov had never been in any trouble with the law, nor was he accused of any actual crime, with the ’terrorism’ charges linked solely with the 2003 Supreme Court ruling.  During one of the hearings, the Russian prosecutor Sergei Aidinov expressed indignation when Dmitry Dubrovsky from Amicus Curiae stated that there was no proof of terrorism in Hizb ut-Tahrir  ideology and practice.  How could Dubrovsky - Aidinov asked - in his capacity as expert (testifying for the defence), assert that Hizb ut-Tahrir is not a terrorist organization when there is the 2003 Supreme Court ruling?.  Dubrovsky’s answer was brief and to the point:  “Because science, unlike jurisprudence, is not willing to accept a court ruling without evidence and the latter, unfortunately, does not provide any proof of terrorism in the practice and ideology of Hizb ut-Tahrir .”  Dubrovsky also noted that the so-called Islamic State has criticized Hizb ut-Tahrir  for rejecting violence.

Dubrovsky also criticized the lack of competence of the supposed experts whom the FSB got to carry out an assessment of the transcript in this case. He noted, for example, that such an assessment needed to include the study of audio and video recordings, and had not, with the authors having merely taken the presence of such recordings, asserted by the prosecution, on faith.

Essentially the only ‘evidence’ in this case was provided by two ‘secret witnesses’ whose identity was concealed despite the lack of any legitimate grounds for secrecy. Those ‘anonymous witnesses’ claimed that, from 2015 to 2018, Bektemirov took them to ‘conspiratory meetings’ of the supposed Hizb ut-Tahrir  group, recruited new followers; held explanatory discussions in mosques; and also discussed the persecution of Muslims in Crimea.

Bektemirov’s lawyer Emil Kurbedinov is convinced that one of these individuals is Adnan Masri, and says that he is appearing as a ‘secret witness’ not because he has anything to fear, but because he is, in fact, an FSB agent.  Kurbedinov has amassed evidence demonstrating that Masri has played a similar role in at least five other ‘trials’, including those that resulted in huge sentences against recognized political prisoners Ruslan Zeytullaev and Enver Seitosmanov.

In one of Bektemirov’s statements to the court, he described the armed ‘search’ of his home on 7 July 2020, during which he was prevented from having a lawyer present and threatened with a longer sentence if he did not agree to the largely formal ‘services’ of a state-provided ‘lawyer’.

Bektemirov told the court how he had seen and immediately objected to a religious book being planted by the FSB officers.  The situation was especially absurd as the officers later genuinely found all of his books which he had no reason to hide.

“You can say that the operation was carried out successfully.  They found what the person had not even concealed,<> It is not even clear why they needed to be hidden, and what is wrong with them.  Probably just because we have found ourselves in the legal realm of the Russian Federation where there has long been the rotten stench of godless communism”.

Prosecutor Sergei Aidinov has already taken part in two effective death sentences, those against 63-year-old Oleh Prykhodko and 64-year-old Zekirya Muratov. On 1 February 2022, he claimed that ‘guilt’ has been proven and that Bektemirov should be sentenced to 12 years’ imprisonment in Russia’s harshest-regime penitentiary institutions, with the first three years in the appalling conditions of a Russian prison.

During the ‘trial’, presiding judge Aleksei Abdulmazhitovich Magomadov, together with Kirill Nikolaevich Krivtsov and Sergei Fedorovich Yarosh from the notorious Southern District Military Court in Rostov (Russia)  essentially worked for the prosecution, allowing secret witnesses and preventing questions from the defence that proved the lack of any grounds for the charges. On 11 February, these individuals handed down a sentence of 11 years, with the rest of the prosecutor’s demands allowed in full.

He will not be moved until after the appeal hearing, and letters are an important way of telling him that he is not forgotten and making sure that both the prison staff and Moscow know that their actions are under scrutiny. Letters need to be in Russian, and on ‘safe’ subjects.  If that is a problem, use the sample letter below (copying it by hand), perhaps adding a picture or photo. Do add a return address so that he can answer.