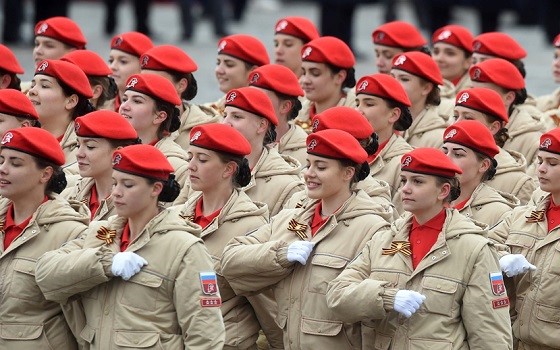 Yunarmia, the ’Youth Army’ that Russia is using to indoctrinate children into wanting to fight for what they are told is their country Photo from Novosti Gorlovki

While Russia continues to assert that it is Ukraine that is failing to comply with the Minsk Accord, it is actively creating a situation where a significant number of young Ukrainians from Donbas could, in principle, be liable for conscription into the Russian army.  The latter has played a major, but covert, role in the conflict in Donbas, and may now be on the brink of openly fighting Ukrainians.  Unlike in occupied Crimea where it is virtually impossible not to take Russian citizenship and where young Ukrainians face criminal prosecution for rejecting Russian conscription, at present everything is purportedly voluntary in the self-proclaimed and Russian-controlled  ‘Donetsk and Luhansk people’s republics’ [‘D-LPR’].  That could very easily, and swiftly, change, with this adding another dangerous aspect to the clear aggression behind Russia’s weaponization of citizenship on occupied Ukrainian territory.

On 29 January 2022, Viktor Vodolatsky, a State Duma deputy from the ruling United Russia party and the first deputy head of the committee on CIS affairs, Eurasian integration and links with compatriots, asserted that many ‘Russian citizens’ from ‘D-LPR’ had already served, or were serving, in the Russian army.  He added that “residents of LPR and DPR, having received a Russian passport, are subject to all the rights and duties of a Russian citizen,” and went on to suggest that such ‘citizens’ always have relatives in Russia.  If they are registered with them, they are automatically called up for military service from the age of 18.

On 5 December 2021, ‘DPR leader’ Denis Pushilin asserted in Moscow that the number of people who had received Russian citizenship in ‘DPR’ was over 350 thousand, but went on to say that he was “sure that everyone will receive it”.  Given that it is almost two years since Russian President Vladimir Putin’s first decree regarding simplified procedure for such citizenship, it looks as though the interest is not as great as was blithely asserted at the time.  Given that ‘LPR’ should also be taken into account, that is still a large number of supposed ‘Russian citizens’ who will doubtless include many young men of military service age.  Russia is, of course, unperturbed by the fact that neither Ukraine nor the EU recognize these passports and can, according to Russian law, forcibly demand that such ‘citizens’ do military service.

That, at present, is unlikely for people continuing to live in occupied Donbas since conscripts must have ‘propiska’ or registration in Russia, and by no means all Ukrainians do have relatives in Russia (or the possibility or wish to register with them).  On the other hand, Putin recently issued instructions to enable payment of social benefits without such registration, so this is clearly not an insurmountable hurdle.

Konstantin Skorkin from the Moscow Carnegie Centre told News of Donbas that young men from ‘D-LPR’ are not forcibly called up for military service, but added that this is essentially due to the lack of established practice since “such a number of new Russians appeared fairly recently”.

According to Pavel Lisiansky, founder of the Eastern Human Rights Group, there are already people who have done military service in Russia, and have returned to ‘D-LPR’.  He believes that Russia is now preparing a military reserve in occupied Donbas, and told Donbas Realities that such home-grown ‘citizens’ will enable Moscow to deny that its military personnel are deployed in Ukraine.

Lev Shlosberg, the Russian politician who, back in August 2014, made public the first Russian military deaths in Donbas, suggested that it would be foolish for Russia to use such conscripts, rather than conscript soldiers in the case of open war between Russia and Ukraine.  He may be right now, however there were reports back in 2015, for example, from the St Petersburg Committee of Soldiers’ Mothers, of conscripts being effectively forced into going to Donbas to fight.

The economic situation in occupied Donbas is dire, and, as News of Donbas reports, many young men do end up doing military service because they want to work in Russia.  Young men under 27 need the relevant stamp from the military recruitment office to get an official job.  Skorkin pointed to the contradictions in the current situation.  Russia presents Donbas as some kind of outpost of the so-called ‘Russian world’, yet Russia’s handing out of Russian passports is leading to people leaving the area because nobody wants to live in the unrecognized ‘republics’.

On 21 January this year, Viktor Vodolatsky also publicly claimed that “Russia cannot allow Russians living in Donbas to be killed” and that they would “take all measures within the framework of international law and our constitution to defend citizens of the Russian Federation”.  He chose not to mention that these ‘citizens’ were not Russians and had obtained Russian citizenship after Putin began artificially pumping up the number of such supposed ‘Russian citizens’.  This he did in 2019, first  through his decree on 24 April 2019, simplifying the procedure for residents of ‘D-LPR’ to get Russian citizenship, and then via a second decree on 17 July 2019, extending the simplified procedure for all Ukrainians in the Donetsk and Luhansk oblasts (Donbas).  Although Putin, of course, claimed this to be ‘a humanitarian measure’, rumours had been reported in the Russian media of such a plan, with the reports accompanied by comments about how successful such mass issue of passports had been in Russia’s seizure of control of the Georgian regions of South Ossetia and Abkhazia.  Novaya Gazeta journalist Pavel Kanygin noted at the time that Moscow was making its threat to the newly elected Ukrainian President Volodymyr Zelensky quite clear.  If his administration didn’t accept Moscow’s terms for taking back the so-called ‘republics’, they could end up with millions of Russian citizens whom Russia would then claim it was entitled ‘to protect’.

This is very clearly the message that is now being pushed, among others, by deputies from Putin’s United Russia party.