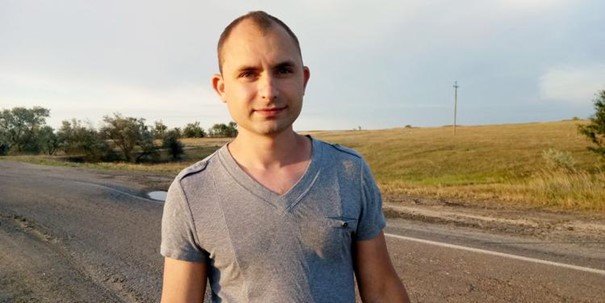 A Russian occupation court has found 32-year-old Artem Shabliy guilty of so-called ‘participation in an extremist organization’ for practising his faith as a Jehovah’s Witness.  While appalling that Russia is continuing its religious persecution in occupied Crimea, this is at least the first time that a two-year suspended sentence has been passed, after four real sentences of six or six and a half years against four other Ukrainian believers.

The sentence was passed on 16 February by ‘judge’ Iryna Altanets from the occupation Kerch Municipal Court.  The sentence is to two years with a three-year period of probation.  Since the young father of two has been persecuted solely for practising his faith, this suspended sentence could easily turn into a real prison term at any time over the next three years, if Crimea remains under Russian occupation.

On 26 May 2020, armed FSB, Rosgvardia and masked OMON officers burst into four homes in Kerch, including the home that the then 29-year-old Artem shares with his wife, mother and two small children.  Shabliy’s 4-year-old son sustained injuries from the window pane glass which the officers broke, quite unnecessarily, during their armed storming of the building.  There was absolutely no reason for not simply ringing the doorbell, just as there was no justification for handcuffing the young father.

Five believers were taken to the FSB for interrogation, including both Artem Shabliy and his wife.  She was later released, however Shabliy was arrested and held in custody for two days.

The criminal proceedings are known to have been initiated by ‘investigator’ Valery Zarubin with Shabliy accused of having “drawn others into the activities of an extremist organization” by discussing the Bible with them (Article 282.2 § 1.1 of Russia’s criminal code).   At some point, the charge was reduced to 282.2 § 2 (‘involvement’ in a so-called extremist organization, not ‘organizing’ its activities, with this, presumably, the reason for the suspended sentence.

The prosecution was passed to the ‘court’ in April 2021, initially under ‘judge’ Yevgenia Romanenkova, with the first hearing on 24 May.  Around 20 people who came to show support were prevented from attending the hearing or standing outside the ‘court’ building, with officers taking their passport details in a typical act of intimidation.  Another standard feature of Russia’s political and religious persecution in occupied Crimea is that a provocateur was used, somebody identified only as I. Dukhanin.

During the hearings, Shabliy expressed outrage over the fact that he was charged with ‘extremism’ and said that, on the contrary, it was he and his wife who had been the victims of extremist behaviour – insults and denigration on the grounds of their religious faith.  He was scathing about the indictment, both the huge number of mistakes, including grammatical, in it and the absurd charges.  How could he understand what he was charged with from a document that ‘accused’ him, for example, of having “discussed followers of the given religious organization”?   How could they call his faith in God, held since the age of four, ‘extremist activity’, with his good deeds as a law-abiding Christian treated as something bad?

The prosecutor had asked for a three-year sentence, with a further year’s restriction of liberty, however she had also asked for this to be conditional, with a parole period of four years.

As mentioned, this is, at least, the mildest sentence to date in occupied Crimea.  There seems little cause for drawing any major conclusions since it comes a month after  an occupation court of appeal in Sevastopol upheld the fourth real sentence against a believer, namely the 6-year sentence against 49-year-old Igor Schmidt.

Russia is in violation of international law in its application of repressive Russian legislation on occupied territory.  The Russian Supreme Court’s shocking ban of the Jehovah’s Witnesses on 20 April 2017 also violates Russia’s own Constitution which, in words, guarantees freedom of religion.

Since then, four Ukrainians from occupied Crimea have been sentenced to six or more years’ imprisonment: Serhiy Filatov; Artem Gerasimov; Viktor Stashevsky and Igor Schmidt.

Serhiy Filatov (b. 1972) was arrested during a ‘mass operation’ against believers in Dzhankoy from 15-16 2018.  Filatov’s ‘trial’ took place in the Dzhankoy District Court under occupation, with the prosecution claiming that Filatov had “undermined the foundations of the constitutional order and the security of the state”, by being the leader of a religious organization.  On 5 March 2020, he was sentenced by ‘judge’ Maria Yermakova to six years’ imprisonment in a medium security prison colony.  That sentence against the 47-year-old father of four was then upheld by ‘judge’ Edward Belousov of the Crimean High Court on 26 May 2020.   Beloysov is one of eight ‘judges’ and enforcement officers recently placed on the EU’s sanctions list.

Viktor Stashevsky (b. 1966) is a father of two from Sevastopol, and was also caring for his elderly mother.  He was sentenced by the ‘Gagarin District Court’ on 23 March 2021 to six and a half years’ imprisonment on the same ‘organizing extremist activities’ (Article 282.2 § 1 ) charge, and taken into custody in the courtroom. The ‘judge’ in the case was Pavel Kryllo who has been involved in at least one other politically-motivated sentence (against Ihor Movenko).  The sentence was upheld on 10 August 2021 by ‘judge’ Vladimir Avkhimov from the occupation ‘Sevastopol Municipal Court’.  During his final address to the ‘court’ on 23 March, Stashevsky pointed out that all charges would be withdrawn if he were just to stop being a Jehovah’s Witness.  “I do not plan to renounce my faith in God. I have been and remain a Jehovah’s Witness.”

Schmidt is one of four believers from Sevastopol who were arrested and remanded in custody after armed searches on 1 October 2020.  Yevhen Zhukov; Volodymyr Maladyka and Volodymyr Sakada are facing the same ‘organizing the activities of an extremist organization’ charge under Article 282.2 § 1, with their ‘trial’ now underway.

In his final address to the Gagarin District ‘court’ in Sevastopol on 22 October 2021, Schmidt pointed out that the investigators; the prosecution and expert assessments had all directed their efforts solely at proving that he is a Jehovah’s Witness.  This, he stressed, was not something he had ever denied, and he was, on the contrary, proud to be a believer.

‘Prosecutor’ V.S. Yazev had demanded a 7-year sentence, and ‘judge’ Lyudmila Petrovna Tumaikina passed a sentence of six years, with this upheld on 17 January 2022.

Taras Kuzio (b. 1978) was first mentioned as facing charges after armed searches on 20 March 2019, however at that stage it was only Artem Gerasimov who ended up ‘on trial’.  On 4 March 2021, ‘investigator’ V.A. Novikov initiated criminal proceedings against Kuzio under Article 282.3 § 1.  In an ominous new development, he is accused of ‘financing an extremist organization’.  13 armed searches were carried out on 11 March 2021, having been ‘authorized’ by Kievsky District Court ‘judge’ Viktor Krapko.  Four believers were interrogated, with Kuzio detained.  It seems that the following day, Krapko did at least reject Novikov’s application for Kuzio, who has two young children, to be remanded in custody and placed him under house arrest.

On 29 July, Petro Zhiltsov (b. 1987) was also detained.  He had earlier been interrogated as a ‘witness’ in the case against Kuzio, however Novikov initiated identical charges (under Article 282.2 § 1), accusing Zhiltsov of both financing and of organizing the so-called ‘activities of an extremist organization’.  He too faces a sentence of up to 10 years for practising his faith.

On 6 August, it became clear that charges were also likely against Serhiy Lyulin and Tadevos Manukian. Lyulin was seized by FSB officers while in Russia, thrown into the boot of a minivan and driven, in handcuffs and bound with scotch tape, for 16 hours to occupied Simferopol.  He was shortly afterwards remanded in custody, and has been imprisoned in a cell with Crimean Tatar leader and journalist Nariman Dzhelyal since September 2021.  There is no information at present about Manukian, however he and Lyulin are also under the more serious Article 282.2 § 1.

On 2 August, charges were initiated of ‘organizing the activities of an extremist organization’ (under Article 282.2 § 1) against two men: Oleksandr Lytvyniuk (b. 1960) and Oleksandr Dubovenko (b. 1973).  The charges, which carry a sentence of up to 10 years’ imprisonment, are over a Zoom conference which Vitaly Vlasov, ‘the investigator’ implicated in the falsified charges and torture against Nariman Dzhelyal and Ukrainian journalist Vladislav Yesypenko, claims was to “attract new members of a banned organization’.