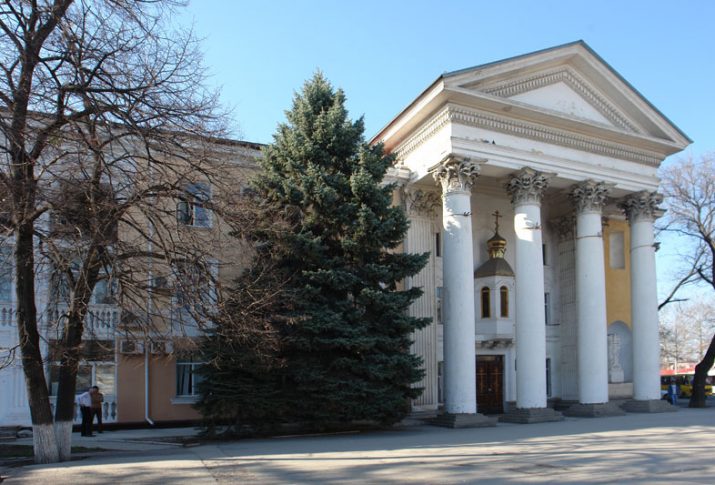 Cathedral of Saints Volodymyr and Olha in Simferopol

Ukraine’s Verkhovna Rada has taken an important step in protecting the Ukrainian Orthodox Church in Crimea which has been under attack since Russia’s invasion and annexation of the peninsula.  The resolution, supported by a large majority (271) of Ukraine’s MPs on 17 February 2022, is welcome but extremely belated, with the delay baffling given Russia’s overt attempts to drive the Church out of occupied Crimea.

Resolution No. 3447 is entitled ‘on some issues regarding protection of the right to freedom of world view and faith of believers of the Crimean Diocese of the Orthodox Church of Ukraine and retention of the Cathedral of Saints Volodymyr and Olha in Simferopol’, and formally transfers the Cathedral, which is also the Church’s Centre in Crimea, to state ownership for the duration of Russia’s occupation.  While Russia will dismiss any moves aimed at restraining its illegal plunder, Ukraine is, nonetheless, sending a clear message that it will defend the Church and its Cathedral and gaining an extra instrument for approaching international courts and enlisting the support of Ukraine’s western partners.

The delay is twofold.  It is good that Ukraine’s MPs have adopted the resolution, but quite unclear why it took so long, since the original resolution was passed by Ukraine’s Cabinet of Ministers in March 2020, with Resolution No. 3447 first tabled in the Verkhovna Rada on 7 May 2020.  At that time, Archbishop Klyment, Head of the Church in Crimea, said he believed that the resolution, which he had been advocating since 2014, could, once adopted by parliament, help to preserve the Church.

He explained that once the resolution had been affirmed by parliament, it would be possible to develop a specific algorithm for countering attempts by the Russian occupation regime to take the Cathedral away.  After fighting the battle alone, he said, now he would have the Ukrainian state and the international community on his side.

That was back in May 2020, and it has taken until February 2022 for parliament to vote on the resolution, and this despite the attempts by the Russian occupation regime to appropriate the Cathedral and otherwise restrict the Ukrainian Church which Archbishop Klyment calls the only island of Ukrainian identity and spirituality on the occupied peninsula.

Russia’s persecution of the Ukrainian Orthodox Church began soon after its invasion and annexation. Open repression might well have prompted further sanctions, and the occupation regime focused instead on demanding unacceptable ‘re-registration’ under Russian legislation and on depriving the Church of its land and places of worship. The Russian occupiers claimed that the land, which, under Ukrainian law, was the property of the Autonomous Republic of Crimea, was ‘federal Russian property’ which the Archbishop was illegally occupying.  This was absurd, but Klyment could not argue this alone since the land was under effectively permanent lease for a nominal fee, not the Church’s private property.  That made it much more difficult to protect legally at international level, and Klyment made repeated approaches, only to be told by Ukraine’s Ministry of Culture that the Ukrainian government could not do anything since Crimea was not under their control and by another minister, that Ukraine didn’t have any mechanisms.

The battle to seize control of the Cathedral of Volodymyr and Olha effectively began soon after Russia’s invasion, with Klyment reporting that he was initially offered 200 thousand dollars to give the Cathedral up.

The attempts to totally evict the Diocese and the congregation date back to 2019.  Serhiy Zayets, the lawyer representing the Ukrainian Orthodox congregation, wrote back in August 2020 that the original eviction notice was in the summer of 2019, although Klyment reported on 8 February 2019 that he had received a writ ordering that he vacate the Cathedral within 30 days.  The Archbishop then warned that this was likely to lead to eight parishes in rural areas also being forced to close.

The real attempts to evict the Church, Zayets says, began at the end of August 2019, although they swiftly hit what should have been a formidable obstacle.  In September 2019, the UN Human Rights Committee intervened, applying Rule 94 to halt the eviction of the congregation.  On 4 August 2020, Russia’s Supreme Court refused to reconsider the decision to evict the congregation from the Cathedral.

Zayets stated then that it was time to sound the alarm. The Supreme Court’s decision, he believed, “essentially means the total dissolution of the Ukrainian Orthodox community in Crimea.  This is not formally genocide, but it borders on it. Russia is destroying yet another Ukrainian religious and cultural group and is continuing to purge Crimea of all that is Ukrainian”.

That decision has yet to be implemented, but the threat remains and Ukraine needs all the instruments and support it can find to save the Ukrainian Orthodox Church in occupied Crimea.