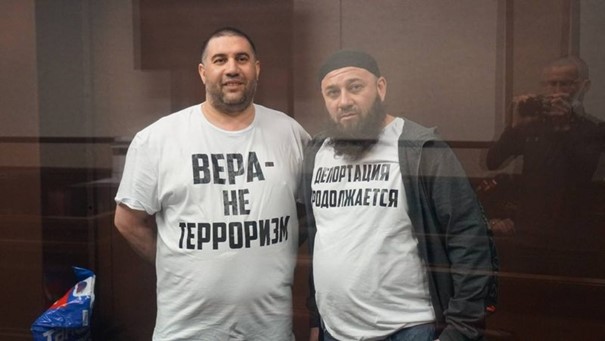 A Russian ‘court’ which has been imprisoning Ukrainian political prisoners since 2014 has sentenced two Crimean Tatars, both of whom were active in the Crimean Solidarity human rights movement, to 30 years’ imprisonment for conversations back in 2016 about their religious beliefs.  Although it was another person, almost certainly an FSB agent, who initiated all the religious subjects on which the charges were based, and one of the men can be heard trying to politely end the conversation, the prosecution claimed that this was a ‘conspiratory’ meeting.  Neither man was accused of any actions or plans that would, in a democratic country, constitute a crime, yet the Russian court sentenced Timur Yalkabov to 17 years and Lenur Seidametov to 13 years.

Several dozen Crimean Tatars had come from occupied Crimea to show their solidarity with the two recognized political prisoners.  Only the men’s wives, and Timur’s brother, were allowed into the courtroom, with traffic police deployed outside the court to harass and intimidate other Crimean Tatars by demanding to see their car documents and recording registration numbers.  Police officers inside the court building also unwarrantedly demanded that no photos or videos from the court be loaded on the Internet.  They ignored the request to explain on what legal grounds they were making such a demand. Initial attempts to prevent journalists from being present were abandoned after the journalists stood their ground.

The sentences passed on 22 March 2022 were only slightly lower than those demanded by the Russian prosecutors Mikhail Arefyev and Konstantin Firsov.

Timur Yalkabov (b. 1980) was sentenced to 17 years’ imprisonment, with the first four years in a prison, the very worst of Russian penal institutions, and the remainder in harsh-regime prison colonies.  This, according to the sentence, is to be followed by 18 months’ restriction of liberty.

Lenur Seidametov (b. 1985) was sentenced to 13 years, with the conditions identical to those against Yalkabov, followed by a year’s restriction of liberty.

Both men are recognized as political prisoners by the renowned Memorial Human Rights Centre, and their release has been demanded by multiple  European and international bodies.  The charges themselves were both unwarranted and in violation of international law, and the alleged ‘evidence’ deeply flawed.  None of this made any difference to presiding judge Roman Saprunov, together with Rizvan Zubairov and Sergei Grishin from the Southern District Military Court in Rostov who essentially provided the sentences demanded.

Seidametov and Yalkabov were arrested, together with four other Crimean Tatars, after armed searches at around 4 a.m. on 17 February 2021 during which the FSB did not pretend that they were looking for anything but ‘prohibited’ religious literature.  Seidametov’s wife has said that the FSB planted several such books, with this an increasingly common part of such ‘searches’ carried out with the men illegally prevented from having lawyers or independent witnesses present.

All of the men, including Seidametov and Yalkabov, were charged with ‘involvement’ in Hizb ut-Tahrir, a peaceful transnational Muslim organization that is legal in Ukraine.  A flawed and secretive ruling by the Russian Supreme Court in 2003, declaring Hizb ut-Tahrir ‘terrorist’ has been used since 2014 to sentence people to up to 24 years for often unproven ‘involvement’ in a peaceful organization.  Russia is particularly using it in occupied Crimea as a weapon against Crimean Tatar civic activists and journalists.   Timur Yalkabov was charged with the more serious charge of ‘organizing a so-called Hizb ut-Tahrir cell’ (Article 205.5 § 1 of Russia’s criminal code).  Lenur Seidametov was accused of ‘involvement in such a purported cell’ (Article 205.5 § 2).  Both men were also accused of ‘planning to violently overthrow the state’ (Article 278), with this also based solely on the 2003 Supreme Court ruling, not on any actual evidence.

As mentioned, the ‘evidence’ in this case was obtained illegally, via overt provocation from the FSB.  There are certainly occasions where the security services in any country infiltrate organizations to prevert crimes or catch alleged criminals.  They bear no resemblance to this case where the unidentified individual deliberately pushed a conversation on religious subjects in a direction that suited the prosecutor.  The men themselves say that they met the individual at a mosque in 2016 after which he invited them for a cup of tea. The prosecution has since claimed that the latter conversation was ‘a conspiratorial meeting’ organized by Seidametov.  In fact, the defence say, it is clear from the video that Seidametov was uncomfortable at this conversation and made every effort to leave the place where they were meeting.  All of this is particularly shocking as the questions that this individual was asking (in the knowledge that the conversation was being videoed) are similar to those later put to the FSB-loyal ‘linguist experts’ for their assessment.

Lawyer Emil Kurbedinov has identified this unidentified individual, who appears as a ‘secret witness for the prosecution’, as an FSB agent called Adnan Masri, who has been deployed in a large number of such ‘trials’.  This individual gave testimony on 15 November, under the pseudonym ‘Kurbanov’. He gave muddled and contradictory answers to questions, while claiming to have suddenly ‘remembered’ some testimony that he had not presented earlier.  The defence believe it was abundantly clear that the man was making things up, however this was ignored by the court, as was the lack of any legitimate grounds for allowing anonymous witnesses.

While Russia is using these prosecutions as a weapon against civic activists and journalists, the FSB themselves are known to gain promotion or at least bonuses for such cases.  They can improve their statistics on ‘fighting terrorism’, while taking minimum effort since the charges are essentially copy-pasted from one case to another.  The Russian prosecutors and judges then oblige by asking no inconvenient questions and demanding / imposing monstrous sentences for 5-year-old conversations about religion and solidarity with victims of repression.

The men are likely to be held in the same prison until the appeal hearing, and letters tell them they are not forgotten, and show Moscow that the ‘trial’ now underway is being followed. Letters need to be in Russian, and on ‘safe’ subjects.  If that is a problem, use the sample letter below (copying it by hand), perhaps adding a picture or photo. Do add a return address so that the men can answer.