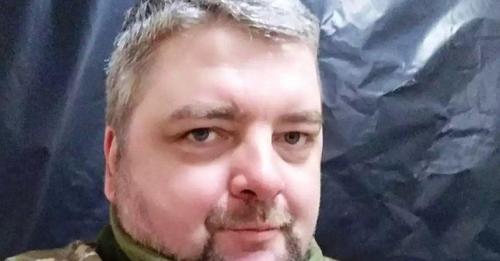 Maksym Butkevych The photo he posted on his Facebook page

Like very many Ukrainian civilians, Maksym Butkevych saw no option but to join Ukraine’s Armed Forces soon after Russia began its full-scale invasion of Ukraine.  He was taken prisoner, as were other members of his unit during military action near Zolote and Hirske in the Luhansk oblast.  There was clearly a period when his parents knew absolutely nothing, only that Maksym was not getting in contact, so the Russian propaganda video on 24 June, showing an interrogation, at least told them that he was alive.  His mother told Babel.ua that they have still had no contact with Maksym, and that only two of the men he was taken prisoner with have been allowed to make brief calls, with those now over two weeks ago (on 25 and 26 June).

Maksym is a well-known journalist and human rights defender who has for a long time been active in the project ‘Without Borders’.  He helped ensure that the plight was known of many asylum seekers facing deportation from Ukraine to Russia, Belarus or other countries where they were in danger.  Ukraine’s record in this area is not good and Maksym would certainly now be speaking out on behalf of Karin Potyomkina, a Belarusian living in Ukraine who is in danger of extradition, although she was recently awarded for her work as a volunteer in clearing the rubble after Russia’s savage bombing of Bucha in Kyiv oblast.

Over recent years, Maksym Butkevych was one of the co-founders of Hromadske Radio and of the ZMINA Human Rights Centre.  Although he is best-known for his human rights work over the past ten years or more, he has worked as a journalist both in Ukraine and, while studying in the UK, for the BBC.

In March 2022, Maksym shared a photo of himself, clearly in military gear, writing “Unfortunately, I must put my work helping refugees, and my humanitarian and human rights activities on hold.  I imagine from the photo, you can understand why…. There are times when you need to be read to defend what is important, I firmly believe that.  And the rest – after our victory.”

Maksym is one of many human rights defenders who have put all other tasks on hold and are now defending Ukraine at the front.  They include Oleksandr Sedov, from the Crimean Human Rights Group and Kostiantyn Reutsky, a well-known human rights activist and journalist originally from Luhansk.  Very many others have joined the Territorial Defence.