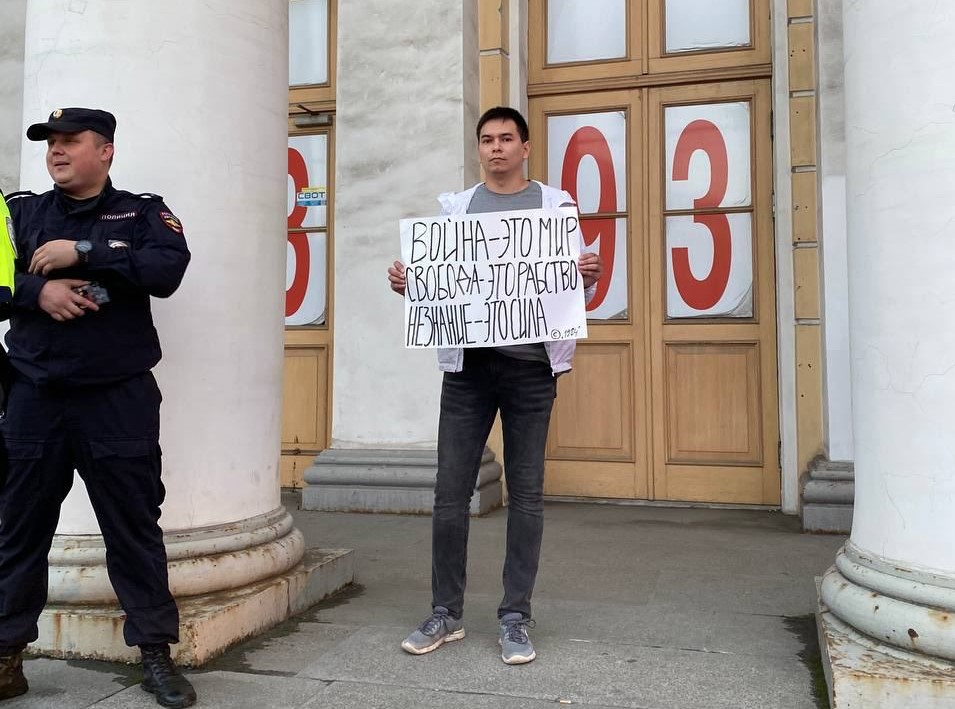 A court in the city of Mineralnye Vody (Stavropol Region, North Caucasus) has fined Andrei Fokin 30,000 roubles. The charge sheet against Fokin was made up of a screenshot of a petition he started on the internet, “Stop the war in Ukraine!”. This account in Kavkaz (Caucasus) Realities.

Solitary protestor Alexander Tarasov in St Petersburg. He was protesting at Gostiny Dvor, the city’s 19th-century shopping centre and a tourist attraction, with a placard reading “On 24 February our future was stolen from us. No to the war!” He himself described his protest and arrest to OVD-Info.

On Wednesday, 27 July a court in the Murmansk Region (Northwest Russia) sentenced Sergei Fateyev to a fortnight’s detention under Article 20.3 (Administrative Offences) that forbids the public display of Nazi symbols. The court ruled that Fateyev prepared and displayed a poster on the wall of his house reading, “United Russia is a fascist country:together the letters Z+V form the German Nazi swastika”, OVD-Info.

On 2 August, according to OVD-Info, mother of five Diana Fateyeva 30,000 roubles under Article 20.3.3 (Administrative Offences) by a court in Nizhny Novgorod (Volga Federal District) for comments she posted on the Vkontakte network. She herself told OVD-Info what had happened to her.

On 4 May this year, the police and the court claim,  Fateyeva added a comment to the item on the Block 52 city community website “Nizhny Novgorod supports the Russian army”. “Think what you’re supporting! How could you?” she wrote,

“I feel ashamed that I share the same city with you! You don’t seem to be stupid people. You always knew that if Putin said something he was taking you for a ride. Now what–suddenly you believe him?! People, what’s happened to you!”

On 2 August the 7x7 Horizontal Russia website that a resident of Krasnoyarsk Region (central Siberia) attempted to paint over the letter Z and was caught by the police. Charges were brought against him for using violence against a law-enforcement officers (Article 318, Criminal Code).

During the night Roman Balyasin was trying to paint over the Z on the ZHELEZNOGORSK city sign when he felt a blow to his back. He fought off his assailant but turned to find police and FSB officers standing nearby who also attacked him. Later Balyasin had his bruises and black eye recorded at the local medical centre..

That same day Balyasin the Taiga.info website  that criminal charges had been brought against him for using force against FSB detective Alexander Tolstikhin. The latter received “no less than three blows to the head”. For painting over the poster Balyasin was accused of “discrediting the Russian army” (Article 20.3.3, Administrative offences), 7x7’s correspondent could obtain no confirmation of this from the Investigative Committee in the Krasnoyarsk Region.. 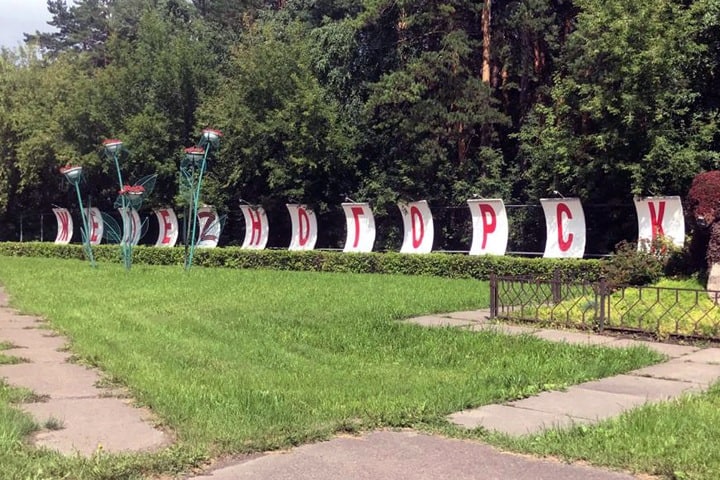 Roman Balyasin tryed to paint over the outsize Z on the ZheleZnogorsk city sign.

On Wednesday 3 August in Rostov-on-Don, the administrative centre of South Russia, the police a young woman who was holding a solitary anti-war protest. An eyewitness reported the event to OVD-Info.

The placard she was holding read “Enough! Stop the war as soon as possible”.

“Thou shalt not kill”, is the proposition with which the young woman Nanako has set out to walk from the Perm Region to Minsk, the capital of Belarus.

We have already written about Nanako and her anti-war marathon (see Digest 17-26 July). “So long as we take a cowardly stance, Death will triumph,” she told a correspondent of the 7x7 Horizontal Russia. This is a of Nanako and her marathon protest.

On Wednesday 2 August anti-war protestor Timur Gilmanov in St Petersburg. He reported his protest and arrest to OVD-Info. His placard bore a quotation from Orwell’s last novel Nineteen Eighty-Four (1950): “War is Peace, Freedom is Slavery; Ignorance is Strength”

In the Urals on Friday 5 August, as by OVD-Info’s Telegram channel the police arrested protestor Georgy Vasilyev in Chelyabinsk. Vasilyev reported his arrest to OVD-Info. He had stood in the city centre holding a poster that read, “I am against the war”. He was arrested and taken to police station № 5.

In St Petersburg on Friday 5 August as by OVD-Info’s Telegram channel, law-enforcement officers charged Dmitry Baltrukov with “discrediting” the Russian army (Article 20.3.3). Baltrukov is a deputy of the city’s Smolniniskoe urban district. The pretext for his arrest was a post on the internet dating back to 24 February when the politician sought permission from the city’s administration to hold an anti-war protest.

On Thursday 4 August, police in Moscow detained Alexander Salamov, a rights activist and defence attorney of Ukrainian origin, because of his “Instead of a Thousand Words” protest. He himself reported the incident to OVD-Info. Salamov protested by entering the Alexander Gardens next to the Kremlin, carrying a blue and yellow Ukrainian flag on which the words “No war” were written. 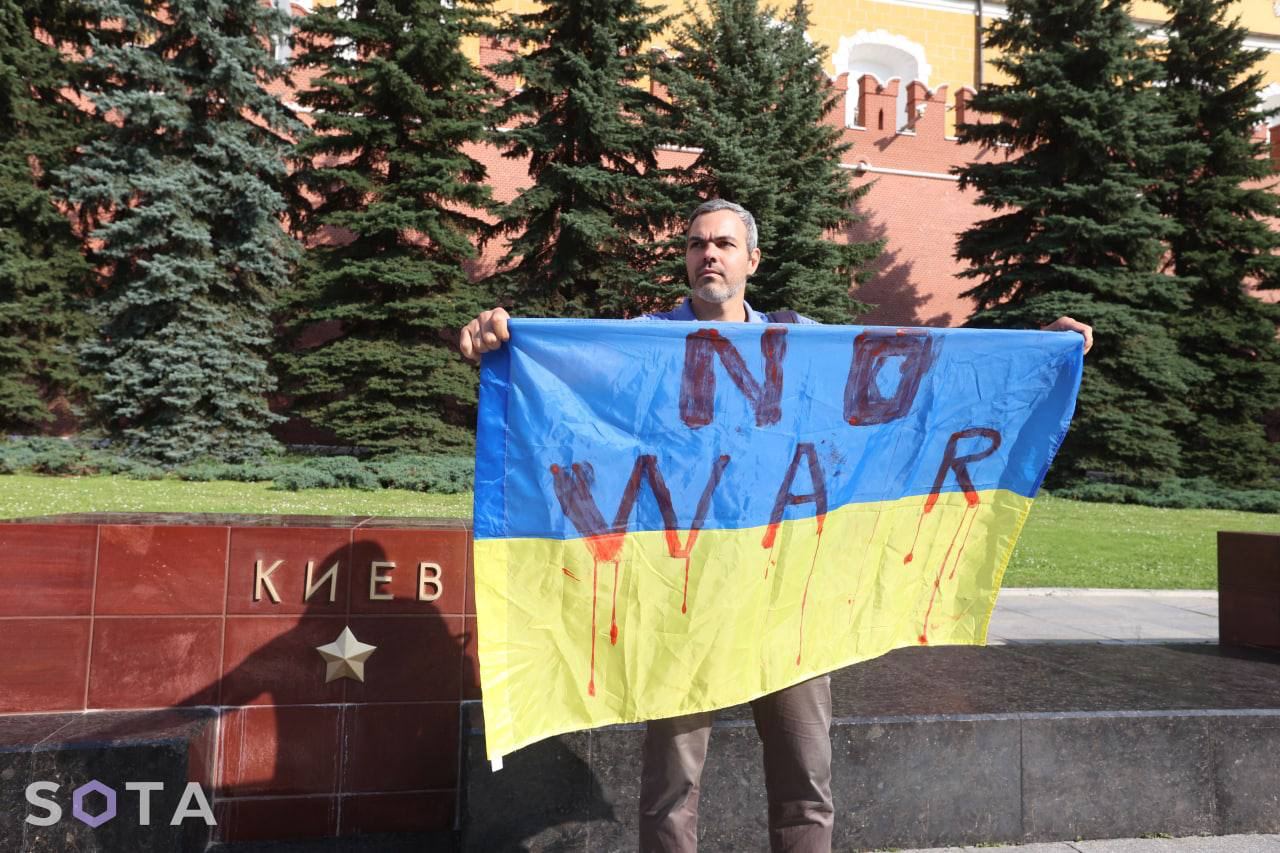 Alexander Salamov, Moscow.The protestor is standing next to the USSR Hero-City star awarded to the Ukrainian capital Kyiv after World War II.

The lawyer was taken to the Kitai-Gorod police station and with two offences: infringing the rules for making a protest and discrediting the Russian army (Article 20.3.3).

The same day, as by OVD-Info’s Telegram channel, police in St Petersburg arrested protestor Alexander who was holding a one-man anti-war protest next to Gostiny Dvor, the city’s 19th-century shopping centre. He himself informed OVD-Info about his arrest. “In a war all are losers!” Alexander had written on his placard. “I’m against war! War means violence, more diplomacy!”

Charges have been brought in Moscow against Maria Volokh and Sergei Smirnov, Yabloko party candidates standing in this autumn’s municipal elections, SOTAvision. The two face prosecution for “discrediting” the Russian army (Article 20.3.3) and breaking the regulations for holding a public event. 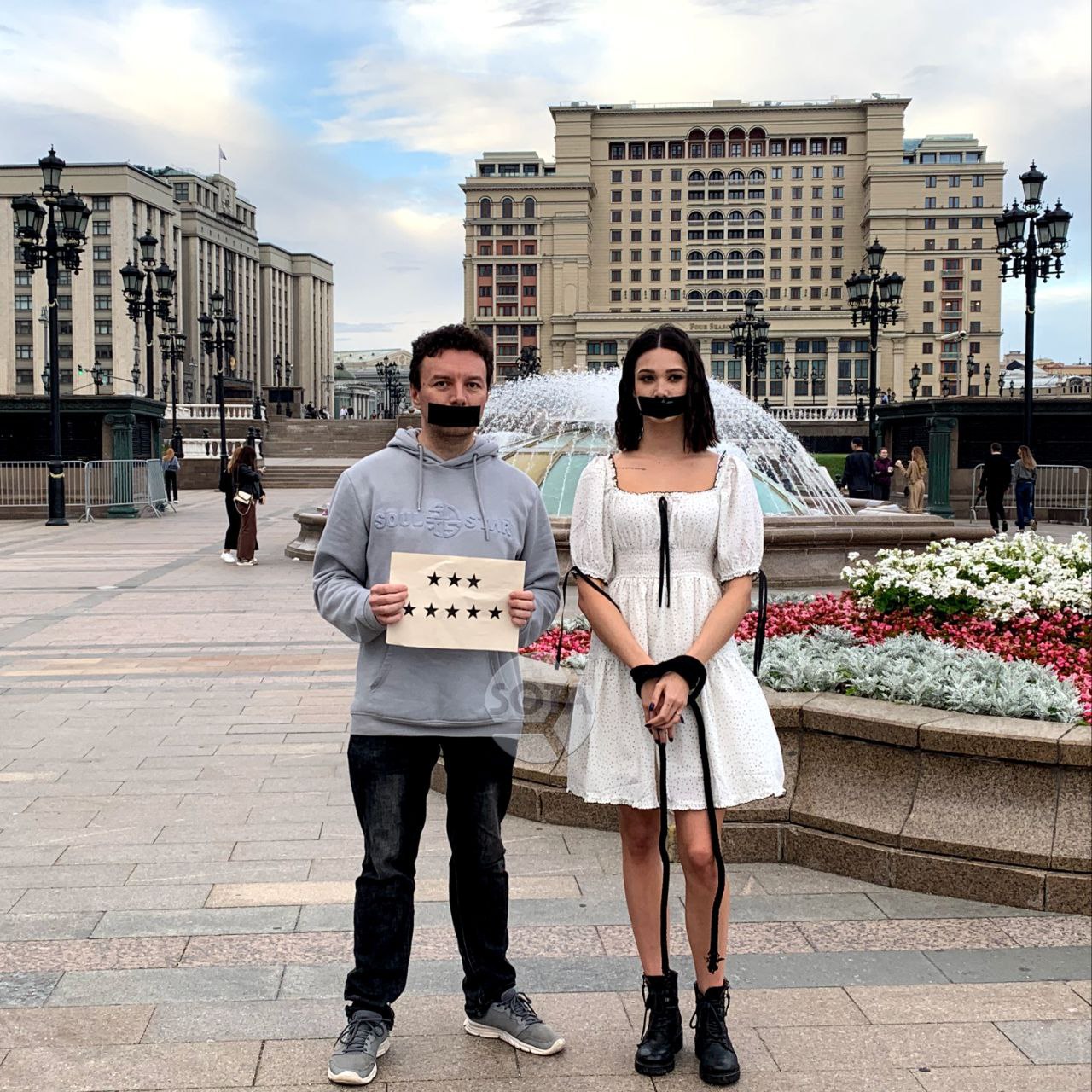 As by OVD-Info’s Telegram channel, Volokh and Smirnov earlier held a protest in the centre of Moscow, standing with black tape across their mouths. Volokh’s arms were tied, and Smirnov carried a placard bearing eight asterisks ******** (No to the war). They walked through the city centre from Government House (the “White Armchair”), to Manege Square, Nemtsov Bridge and the FSB headquarters at Lubyanka Square.

Inhabitants of southern Russia continue to be charged with “discrediting” the Russian army (Article 20.3.3).

Dmitry Yevseyev, who lives in the Kikvidzensky district of the Volgograd Region, was fined 30,000 roubles for a video clip he posted on the Schoolmates (Odnoklassniki) network.

As by OVD-Info’s Telegram channel, a fine of 40,000 roubles was imposed on Sergei Malykhin from the Stavropol Region’s Shpakovsky district (North Caucasus). He held a one-man protest holding a placard painted blue and yellow and inscribed with the words: “No to the war! Putin is a war criminal!” in English and Russian.

These cases have been reported by the Caucasian Realties website.

The young man was convicted of “discrediting” the Russian army (Article 20.3.3). According to the police, he was responsible for defacing the banknotes on which anti-militaristic slogans had been written, as well as appeals not to watch [State-controlled] television. An employee at the nationwide Sberbank or Savings Bank reported this to the police after discovering the banknotes inside the ATM.

The Telegram channel reported that the same court fined another man Artemy Guryashin 30,000 roubles for “discrediting” the Russian army (Article 20.3.3). The Evening News
(Vechernye vedemosti) publication added that on social networks Guryashin described his place of work as Sberbank.

In Tula (Central Russia) a 38-year-old local Andrei Pavlov is being investigated under Article 207.3 of the Criminal Code. The charge was prompted by Pavlov’s posts on the internet.

In Penza (Central Russia) a court has sentenced a 55-year-old teacher of English to a suspended term of five years imprisonment. Irina Gen was charged with spreading “fake news” about the Russian army. Gen has also been prohibited from teaching for three years.

The case against her was opened in late March after she was denounced by some 8th-formers. When asked by her pupils why they were not going to the international competition in Europe Gen told them about the war in Ukraine. Her reply was recorded, and the recording was subsequently passed to law-enforcement.

A protestor was fined 30,000 roubles in a court in the city of Ulyanovsk (Volga Federal District) for “discrediting” the Russian army. Maxim Medvedev held up a poster reading “Don’t forget! What is happening today in Ukraine is appalling. End it without delay”.

He was also fined one thousand roubles under the article about displaying extremist symbols for a tattoo in the form of an eight-pointed star.

On Sunday 31 July, artist and Leningrad Blockade survivor Yelena Osipova once again (see Digest [E], 3-9 July) held a one-woman protest in the centre of St Petersburg. As before, she was holding a placard she herself had painted: “We died for peace”, it read, “NO TO THE WAR!” The last day in July is celebrated in Russia as Navy Day. 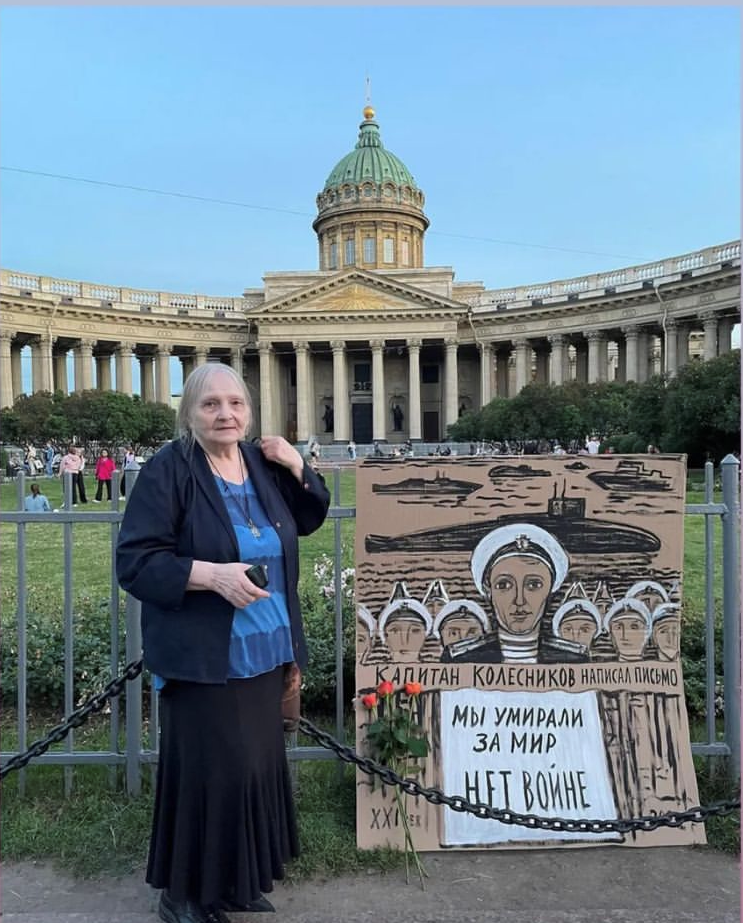 Yelena Osipova protesting on Nevsky Avenue, St Petersburg. The Kazan Cathedral is in the background

On Sunday 7 August, as by Activatica, police in the city of Khabarovsk (Far East) arrested and then released Victor who was holding an anti-war poster. Victor was released without charge but issued with a summons to appear for questioning.

Charges will nevertheless be pressed against him, Victor believes. He was standing on Komsomol Square holding a placard showing a white dove next to the word “Yes” and below it a fighter plane bearing the letter Z on its fuselage next to the word “No”. 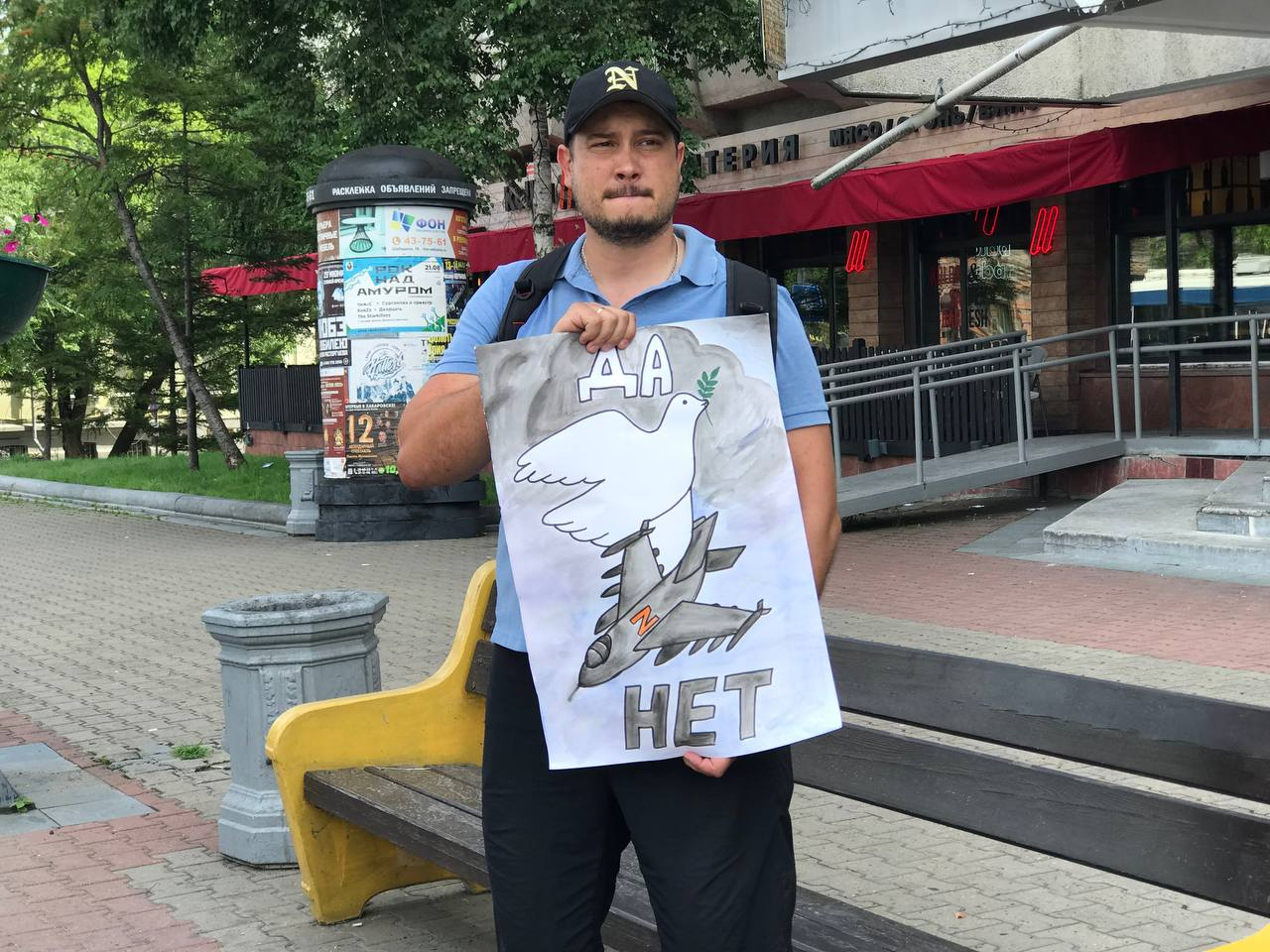 The largest country in the world, Russia is divided into eight Federal Districts (okrug), each with a major Russian city as its administrative centre. The Districts range greatly in area and population (2010 census):

This digest was compiled from a variety of sources: websites such as , , and a variety of Telegram channels (; ; ; and ).