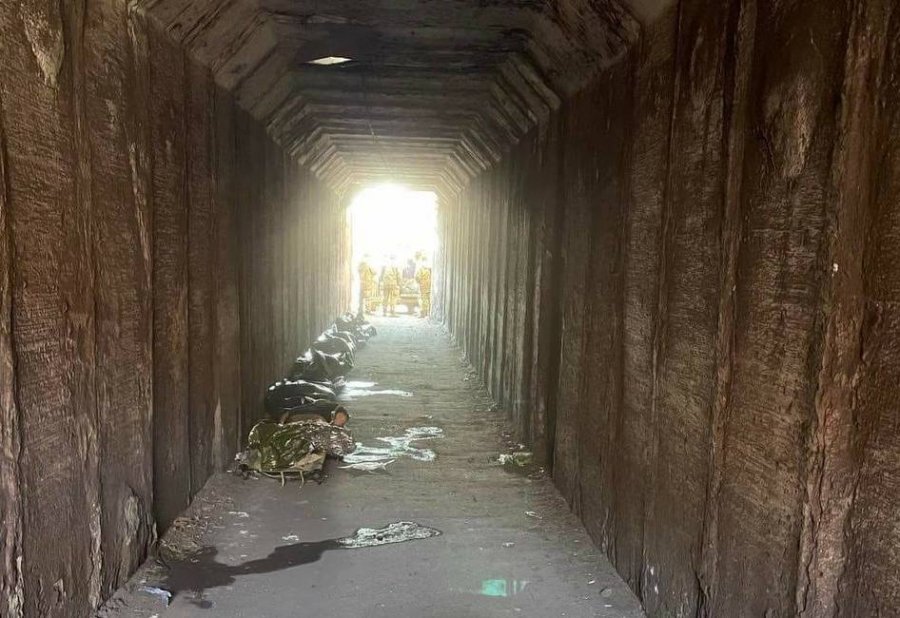 According to the Mariupol City Council, the Russian invaders have organized a collection point for the bodies of their victims and are using special units to pick up bodies left in different parts of the besieged city in order to dispose of them. Russia has clearly understood how much proof of torture, indiscriminate killings, rapes and plunder their military left in Bucha and other Kyiv oblast cities, and would seem to be trying to hide the evidence of its war crimes in Mariupol.

On 9 April, the Council posted two photos.  One was of a peaceful April and showed 100 thousand tulips and other colourful flowers in the city’s Rainbow Park.  “”That was what Spring should have been in the best city in the world.  But they came “to liberate” us…”

The other photo is chilling. It shows an underpass in Sadkiv, a district on the outskirts of Mariupol.  This, the Council reports, is where there is a collection point for the bodies of the Ukrainians whom the Russian military killed.  Special ‘purge’ units take bodies each day to this or other such collection points around the city.  The Council says that the largest of these is in a warehouse at the entrance to the town of Stary Krym.

The Russians then take the bodies away, the Council says, to either be burned in mobile crematoria, or to be buried in mass graves.  The invaders are thus “doing everything to conceal the tragedy in Mariupol, since the scale of the crime is very many times more terrible than the genocide in Bucha.”

It was on 6 April that the Mariupol City Council first reported that the Russians were using mobile crematoria, “in order to hide their tracks” after the international horror over the Russian killing of civilians in the Kyiv oblast.  The Council pointed out that, a week earlier, cautious estimates had put the death toll in Mariupol at five thousand, though the size of the city, the scale of the devastation, and the Russian siege make it likely that there are tens of thousands of civilian victims.  This is the reason that Russia is blocking initiatives to ensure full evacuation of Mariupol. The Council also believes that the Russians “try to identify all potential witnesses of the occupiers’ atrocities through filtration camps and to kill them.”

The Russians are believed to be using local collaborators or people from the Russian proxy ‘Donetsk people’s republic’ [‘DPR’] for ‘special brigades’ that cremate the bodies of those murdered or killed as a result of Russia’s armed invasion. These ‘brigades’ are coordinated by pseudo mayor of Mariupol and collaborator, Kostiantyn Ivashchenko.

Mariupol has been besieged for over a month, with part of the city actually under Russian control.  Vadym Boichenko, Mariupol’s democratically elected Mayor, reported on 6 April  that the city’s infrastructure has been 90% destroyed by relentless Russian airstrikes and shelling.  Well over 100 thousand Ukrainians remain effectively trapped in the city, without electricity, heating, running water, food and medical supplies, and with Russia blocking humanitarian corridors for coaches, and refusing to provide adequate safety assurances so that the International Committee of the Red Cross can enter the city.

It is precisely because Russia is, in this way, blocking access to independent witnesses, that the reports of such mobile crematoria and special units cannot be independently verified.  Such obstruction would not, however, be needed if Russia did not have a lot to hide, and there is also mounting testimony from those who have managed to get out of the city of the crimes being committed.  These confirm, for example, Russia’s attacks on hospitals and on the Drama Theatre, where residents were seeking shelter from Russian bombs, as well as other evident attacks on the civilian population.

As reported,  Russia is currently staging various propaganda stunts aimed at denying its responsibility both for the bombing of the Mariupol children’s and maternity hospital on 9 March and of the Drama Theatre on 16 March.  It has already used Ukrainians, almost certainly taken against their will from Mariupol to Russia and likely threatened with prosecution if they did not cooperate to try, without any credibility, to blame the attacks on Ukrainian soldiers..  Ukraine’s Ombudsperson, Lyudmila Denisova reported on 6 April that the Russian invaders are also abducting civilians and then using them for propaganda in which they are claimed to be captured prisoners of war.  She notes that a person on one of these videos (who may well have been tortured into taking part) has been recognized by his family.

Denisova also reported that Russian media have claimed that 93 so-called ‘Ukrainian deserters’ from Mariupol had been killed as they allegedly fled in civilian clothes.  She points out that this may well indicate the mass execution of Ukrainian civilians.