Russia continues bombing Mariupol while producing propaganda videos about its ‘humanitarian aid’Russia responds to International Court order to stop bombing Ukraine by destroying Mariupol Theatre sheltering familiesRussian invaders take Mariupol intensive care hospital and its patients hostage Mass graves of the Ukrainian civilians Russia claims it is not killingTerror and abductions as Russia tries to break Ukrainian resistance in Kherson and other occupied citiesUkrainian journalist Oleh Baturin feared abducted by Russian invaders in Kherson oblast Mayor of Melitopol Ivan Fedorov abducted after refusing to collaborate with the Russian invaders Russian priest arrested and prosecuted for sermon opposing Russia’s war against Ukraine Russia effectively admits it deliberately bombed the maternity hospital in Mariupol that killed three patients, including a childRussia brings grotesque propaganda to Berdiansk after Ukrainian journalists refuse to collaborate Russian invaders murder Ukrainian volunteers Impassioned appeal from Ukrainian Muslim leader in face of Russia’s war to destroy Ukraine Russia is forcing Ukrainians from occupied Crimea and Donbas to fight in its invasion of Ukraine Children among the dead after Russian invaders opened fire on fleeing civilians Russia installs its propaganda TV after seizing Kherson and imposes 15-year sentences for reporting its invasion of UkraineUkrainian survivors of the Holocaust demand Putin and Russia get out of Ukraine Russia continues its carnage, flouting binding order from ECHR to stop bombing civilians in UkraineBabyn Yar bombed by Russia, 80 years after Nazi Massacre of Ukrainian Jews Russia proposes 15-year sentences and threatens "treason charges" for telling the truth about its war crimes in UkraineRussian schoolchildren told that Russia is bombing and killing Ukrainian children in ‘self-defence’
• Topics / War crimes 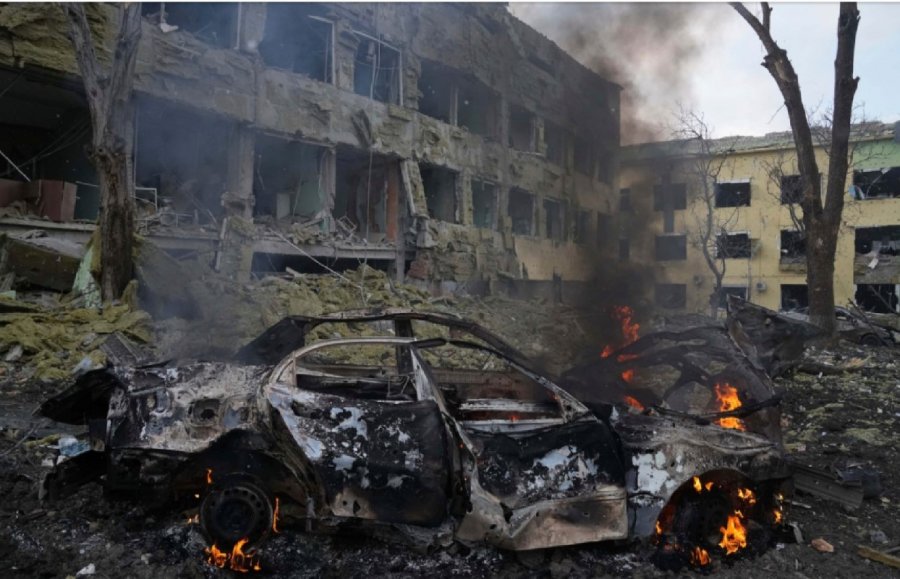 On 23 March, RIA Novosti, and other state-controlled Russian media broadcast a video in which somebody identified as a young Ukrainian from Mariupol, Lyubov Ustinova repeated the Kremlin’s narrative about the Ukrainian Azov soldiers defending Mariupol.  The woman mentioned several of Russia’s most egregious war crimes, such as the bombing of a maternity hospital, claiming that these were committing by Ukrainian soldiers.

The Russian independent MediaZona has now discovered that three videos with Ustinova were produced by Russia’s Security Service, or FSB, with state media sent the videos and instructed not to divulge their source.  It seems likely that the same methods have been used to produce other propaganda, with this one of the reasons why Russia is forcibly ‘evacuating’ Mariupol residents to Russia or occupied Donbas and Crimea, while blocking all roads leading to Ukrainian cities not under Russian occupation.

Such propaganda would be unlikely to convince many in western countries who have, for over a month, been seeing the horrific images of Russia’s barbaric destruction of Mariupol and the carnage and suffering inflicted on its population.  That is not true in Russia for the significant percentage of the population whose only source of ‘information’ is television and other state-controlled media.  It is, of course, likely that many Russians actively prefer not to know the truth, especially when describing the real situation, or in any way expressing opposition to Russia’s aggression can lead to steep fines or worse,

With only some 15 thousand Russians to date having been detained for such opposition, the real problem lies in areas of Ukraine which are temporarily under Russian occupation.  In 2014, essentially the first thing that Russian (and Russian-controlled) militants did was to cut off the Ukrainian media and ensure control over the information that people received.  Since the beginning of Russia’s 2022 invasion, it has used identical methods in parts of the Zaporizhzhia and Kherson oblasts, with these including the destruction of TV towers; the abduction and terror methods used against local journalists and media; and primitive propaganda produced on seized radio stations.  Judging by the ongoing resistance from local residents in those occupied towns and cities, the propaganda is not especially working at present.  That does not reduce the danger since people are under attack and, with many areas cut off from communications, will be especially vulnerable to lies and propaganda.  As reported, Russian propagandists are producing almost certainly staged videos where ‘grateful residents’ are shown receiving so-called humanitarian aid from the country which is pummelling the city with bombs and has killed many thousands.

The video with Lyubov Ustinova, first published by Russian state media on 23 March, is from the same genre, in which the ‘villains’ are the Ukrainian Azov Battalion soldiers, while Russia and Russians are the heroes, who enabled her to safely evacuate.  The Ukrainian Azov soldiers are presented as brutal beasts, who boast of killing people and who commit atrocities. No mention is made of Russia bombing and shelling the city virtually around the clock. Quite the contrary, Russia’s crimes, such as the bombing of the maternity hospital on 9 March and of the Drama Theatre, which was being used as a bomb shelter, on 16 March are, via Ustinova’s words, attributed to the Azov soldiers.

MediaZona notes that none of the media who published the video explained where they had received it from, although RIA Novosti’s video clearly implies that it is their original, since they put their logo on it. MediaZona asserts that the videos were produced by the FSB’s Public Relations Centre, and has published a copy of the alleged email, warning media not to name the source, as well as the timestamp for the video.  They cite two sources (a person “with direct access to the email” and a recipient who, for obvious reasons, do not wish to be named).   A telling detail is that, during one of the three short videos, Ustinova mentions “two friends from Azov” and is asked to elaborate.  She looks confused and stammers, at which point a six minute pause is taken after which she reels off this ‘elaboration’ about Azov without hesitation.

Details can be read here in both Russian and English.  For those who have, unfortunately, seen all too many FSB videos of alleged ‘confessions’ from Ukrainian political prisoners, the style and format are extremely familiar.  In the case of political prisoners, the vast majority later state that they gave such videos under duress.  This is most often savage torture, but can also be threats of massive prison sentences, or threats against their family.  In this case, MediaZona reports that Ustinova was interrogated for a long time, and that they also searched her phone.  She appears to have had contact with the Ukrainian military, and mentioned a friend on Instagram that the FSB believe to be from Azov.  All of that would be sufficient for the FSB to threaten her, with the fact that she has had almost no contact with her family since leaving for Russia on 20 March making her even more vulnerable.  MediaZona has been unable to contact Lyubov, but has spoken with her sister, Anastasia.  It seems clear from the latter’s words that her sister would not have felt she could speak freely on the telephone to them.  Anastasia says that the Russians thought (or pretended to think) that her sister was a saboteur,  and confirms that she was very frightened during the video.

The Mariupol City Council reported the first major forced deportation of Mariupol residents to Russiaon 24 March, although it seems clear that they began earlier.  Since then, various  Ukrainian and international media have managed to speak with people, either those who were themselves sent to supposed ‘filtration camps’ and then found themselves in Russia, or such people’s friends.  It would be impossible to call any such movement truly voluntary when Russia has been systematically bombing the city, including vital infrastructure, depriving its residents of food, fresh water, medication, heating, etc., while also preventing them from leaving for Ukrainian destinations.  One account reported by Crimea SOS suggests that the Russians refused to provide a mother and child with food and water unless the mother agreed to hand over her Ukrainian passport and sign a two-year ‘asylum’ agreement.