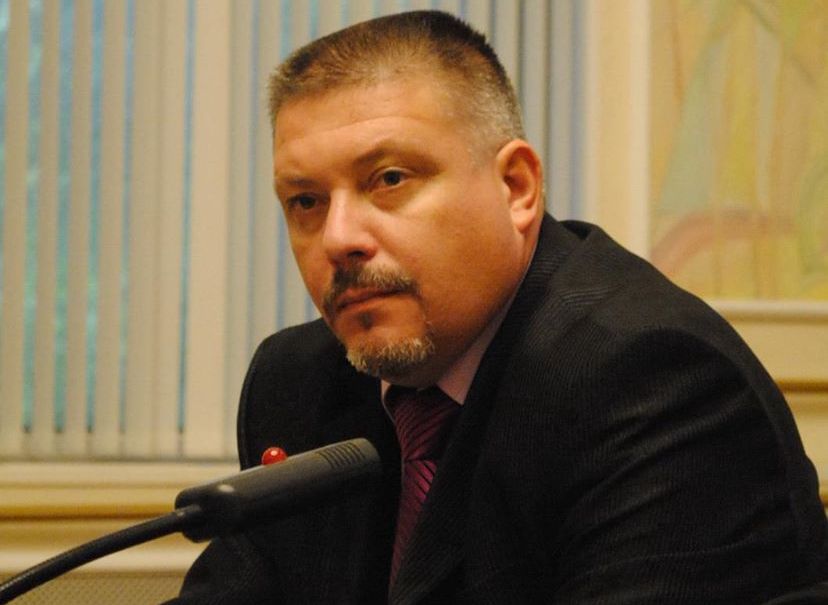 Dmytro Shtyblikov (a photo from before his arrest)

A Russian court has sentenced Ukrainian academic Dmytro Shtyblikov to sixteen years’ imprisonment on surreal ‘treason’ charges.  The indictment remains a mystery, but must, of necessity, date back more than the five and a half years that the 51-year-old has already spent in Russian custody.  The sentence was passed by the same Southern District Military Court in Rostov that has been passing politically motivated sentences against Crimean Tatar and other Ukrainian political prisoners since soon after Russia’s invasion and annexation of Crimea.  Shtyblikov’s daughter has confirmed that an appeal will be lodged.

The only positive detail in this shocking travesty of justice is that the overall sentence, of 19.5 years will be counted from 9 November 2016 when Shtyblikov was first taken prisoner.  The court also imposed a one year term of restriction of liberty after the main sentence.  The 200 thousand rouble fine also mentioned is presumably that imposed after the first sentence.

The new charges were essentially only concocted shortly before Shtyblikov was due to be released at the end of a first, five-year, sentence, and remain a mystery, with the new ‘trial’ having taken place behind closed doors.  The charge of ‘state treason’ against a Ukrainian living in Crimea seems especially cynical since its only justification can be the Russian citizenship without which Russia has made it virtually impossible to live in occupied Crimea.

Shtyblikov was arrested in Russia’s second attempt in three months to claim that they had foiled a ‘Ukrainian saboteur’ plot, and the first in which the alleged ‘plotters’ actually knew each other.  Such prosecutions are an easy way for the FSB to get ‘good statistics on fighting crime’, and also serve to push the image of Ukraine and Ukrainians as ‘enemies’, seeking to hurt other Crimeans, and of Russia and its FSB as thwarting such attempts.

Dmytro Shtyblikov (b. 1970) and Oleksiy Bessarabov (b. 1976) were friends and colleagues, working as military analysts for the Nomos Centre, a Ukrainian non-governmental think tank on research into geopolitical issues and Euro-Atlantic Cooperation concerning the Black Sea region.  Both wrote for, and were on the editorial board of, the journalist Black Sea Security,  and were well-known beyond Ukraine.  The two were friendly also with retired naval captain Volodymyr Dudka (b. 1964), with whom they shared a former naval background.

The initial video provided by the FSB was of the search of Shtyblikov’s flat.  This is no longer available, but at the time demonstrated clearly the nature of the charges.  Nothing even remotely illegal was shown with the video, instead, lingering over the Ukrainian flag hanging on the wall, a business card purportedly belonging to Dmytro Yarosh, former head of ‘Right Sector’, and ‘weapons’ which sports fans immediately identified as airguns which Styblikov used in the game Airsoft (Strike Ball).  The ‘business card’ in question had already aroused mirth and multiple Internet memes back in 2014 when Russian propaganda television triumphantly displayed it, claiming it had been found in the gutted wreck of a car which Ukrainians supposedly attacked.

A little later, Russian state TV showed excerpts of ‘confessions’ given by Shtyblikov and Bessarabov, while both men were held incommunicado and without access to independent lawyers.  Shtyblikov was designated the role of ‘ringleader’ and prevented from ever seeing a proper lawyer at all.  We know from the accounts which Bessarabov and Dudka gave once they had, finally, been allowed to see a proper lawyer, what forms of savage torture were used to obtain ‘confessions’.  In Shtyblikov’s case, his family believe that threats were used against them to get him to ‘cooperate’.  He eventually agreed to plead guilty to the charges of ‘planning sabotage on the instructions of Ukraine’s Military Intelligence, and illegally purchasing and possessing ammunition and explosives.  He was sentenced, on 16 November 2017, to five years’ maximum security imprisonment, as well as the 200 thousand rouble fine, after a ‘trial’ (under presiding judge Gennady Vladimirovich Nikitin)  that took all of 50 minutes.

Bessarabov and Dudka both retracted any ‘confessions’ once they had lawyers, with their ‘trial’ highlighting the fabrication behind the case which, according to one of their lawyers, was “worse than the shoddiest detective novel”.   Both men were recognized by the Memorial Human Rights Centre as political prisoners, with all of the reasons applying equally to Shtyblikov.  The release of all three men has been demanded by international bodies and democratic states, with the charges understood to be politically motivated.  This did not stop ‘judges’  Igor Vladimirovich Kozhevnikov; Vasily Aleksandrovich Avkhimov; and Vladimir Ilych Reshetnyak from the Southern District Military Court from sentencing both Bessarabov and Dudka to 14 years’ imprisonment, as well as huge fines, on 4 April 2019.  These sentences were upheld by Russia’s Supreme Court on 15 October 2019.

The charge of ‘state treason’ (under Article 275 of Russia’s criminal code) was publicly reported in December 2020, although Shtyblikov’s family learned that he had been moved to the Lefortovo Prison in Moscow in August 2020. Although Shtyblikov is now represented by Dmitry Dinze who has represented several other Ukrainina political prisoners, the case was classified as ‘top secret’ and he was unable to provide any information.  He lawyer for several Ukrainian political prisoners, including filmmaker Oleh Sentsov, Dinze cannot reveal very much since the case is classified as ‘top secret’, but did confirm that the charge was of ‘treason in the form of spying’.  The FSB claimed that Shtyblikov and, seemingly, Oleksandr Obloha, a former military man and a friend of Shtyblikov’s, had purportedly gathered secret information.

It is terrifying that such secretive charges can suddenly appear towards the end of an internationally condemned sentence and result in a massive new term of imprisonment.

The letters send a message to the men, and to Moscow, that they are not forgotten.  Dmytro will be at the address below until after the appeal hearing, Oleksiy and Volodymyr until their release can be achieved.  Letters need to be written by hand and in Russian, and any political subjects or reference to their case should be avoided. If possible, include an envelope and some thin paper so that they can respond.