Oksana Stomina: This is medieval cruelty, multiplied by modern possibilities and sick, maniacal ambitions‘Mariupol will still be Ukrainian’ – wife of the military‘Back in the day Shoygu and I saved Neftegorsk after an earthquake and now he turns Mariupol into it’‘I survived 21 days with a shard in my body. I was lucky’‘I washed and buried my brother riddled with shrapnel, and his bloodied and wounded mother was barely in time for the burial…’‘We were lying in the open air, shells were whistling overhead.’ A resident of Mariupol tells about the evacuation and the situation in the city‘The enemy was just under our windows…’ – Anastasia from Irpin‘I saw fire arrows flying from Kherson...’‘... I sang in the basement to calm my daughter down’
• Voices of war

‘The bodies were lying in the street. Broken. Pieces. Blood...’ 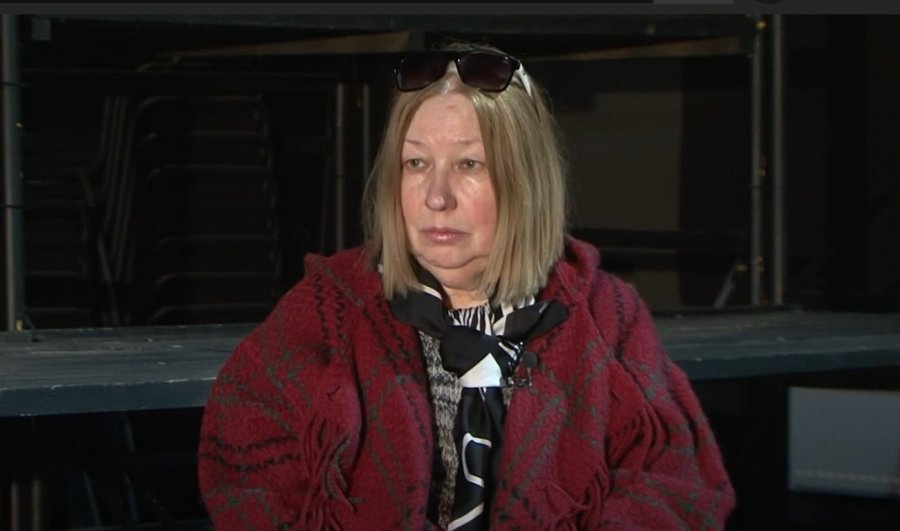 Architect and artist Halyna Bulgakova left everything in Kharkiv: an apartment, paintings   – ready for the exhibition, half-ruined Saltivka houses, which she once designed. The artist came to Lviv only with her grandson. The interview was prepared by Lviv journalist Taras Zozulinsky.

My name is Taras Zozulinsky, I am a journalist from Lviv. I gather the proofs of war crimes of the Russian aggressors in Ukraine. Today my hero is Galyna Bulgakova, an artist from Kharkiv.

– I have constantly lived in Ukraine for many years. Although I am Russian by birth. From Don. It so happened that all my conscious life took place in Kharkiv. And I had various businesses. Even had a joint stock company. I saw many countries. But still I always returned to Ukraine.

By profession I am an architect and an artist. I’ve built many buildings in Ukraine. Specifically, in Kharkiv. Mostly Saltivka. Which is now completely ruined. My diploma is an extension to Kharkiv railway station. Their high-rise hotel is my diploma project. Really.

Meaning that my contribution – I don’t know, big or small – but it is there, in Kharkiv. And I am proud of it.

I am a pensioner for a long time. A widow. My husband was a surgeon. But it’s been ten years since he is gone. And now only one grandson is left from my entire family.

– Did you think that Russia will launch a full-scale invasion?

– It so happened that when the war started, I foresaw it. I somehow felt that it will happen.

And when the war began my grandson did not believe it. He is a student of the Kharkiv University. On the second year. Faculty of Philosophy, culturologist by specialty. He is twenty years old now. And he constantly told me, “It is rubbish, what war?”. It all happened before 2014. And it was all in the air – that aura of war – with a face that wasn’t female.

– How did your first day of the full-scale aggression pass?

– I live in the city center. Near the Palace of Labor. And when the explosions began… there are many restaurants, there is Panorama nearby... There are fireworks there often. But this time in the morning I thought they started too early. Or rather too late. I heard that it wasn’t fireworks. Saltivka was shelled back then already.

But I thought: no. That it is a temporary phenomenon. I mean, this cannot happen! How come that our brothers, Russians, would suddenly attack? How did we harm them?

We were in Kharkiv, waiting until it simmers down. And it was not simmering down.

We live in a small building in the center of the city. Third floor. Nobody above us. Only the offices on the first floor. My grandson and I. We live together. There is no bomb shelter. We only need to run to the Constitution Square, to the subway. But there were such moments when we were going to go, but there was already the curfew, or sub-machine gun fire.

We heard the sub-machine gun volleys. We could not get there. And there were moments when we were told that the station is already closed and nobody is accepted there anymore.

So I descended with him to the ground floor. To our neighbor’s office. And we were lying on the ground, waiting. But there was water there. It was warm. And somehow we survived until morning.

– How have your following day passed?

– Then the powerful shelling began. It was very close already. When the first shells started hitting the city center, it was suggested that we should hide 40 kilometers away from Kharkiv. In a village.

We were brought, we crossed the checkpoints, they asked code words from us. But we passed. And we spent about a week there. A forest was nearby. There was no food. There were no conditions. There were ten of us, and I realized that we needed to leave the city in some way. But there are two of us. We don’t have anyone. There is no help.

And in this small village, or a settlement, how it can be called, there are religious people. They brought us to Kharkiv. They have a charitable mission there. They took their followers, who came to Kharkiv, placed them in their homes. And we were brought to Kharkiv. Almost near the house.

– Have you witnessed the events in which the military committed war crimes against such peaceful residents as yourselves? How did you decide to finally leave the city?

– We went outside and I saw what was happening. For real. Broken windows, blood in the streets. Looting. We saw, even the libraries were looted. I don’t know what the looters were looking for there – there was no food.

I heard the shelling, I was afraid. First, I saw an APC, a Russian one. It was standing while I was getting food. It was standing near “Nikolsky”. It is a new mall that was opened recently. It was opened in summer. I’ve seen that APC near the Korolenko library. And I did not know what to do.

I entered a small shop near our house, and I bought only the most necessary stuff — because the supplies of products were already running low. I bought bread, some noodles, and matches. Such small things...

We ran home, our windows were open. The blast wave must have opened them.

And I didn’t know how to get to the railway station. We decided to go to Lviv. We looked at train schedule. We ran. I have a backpack. A bag with some minimum products.

And we went along the buildings, crossing the street. A car signaled behind us, and the driver said, “Let me give you a ride.”

Thus we got to the railway station. We were not in time for the first train to Ivano-Frankivsk. But there was the next one to Lviv. We got in line, got in a train car, there were many people there. We got to Lviv.

There were ten people in each coupe, and the people were sitting in the passageways. We saw an old woman, about ninety years old, she was sitting in the passageway. We have let her in our coupe. She survived two strokes. She was sitting with us. Constantly asking where she was going. She was going with her son, her son stayed in the vestibule, and she rode with us...

All my paintings, all my works remained home. Big canvas, a meter wide. Pretty good. I prepared them for an exposition. And I had to leave them all. And I switched to small graphics - А4. Most of it I drew here.

– What do your acquaintances from Russia say?

– I’ve got acquaintances on one creative site. There were people with whom I was in creative contact — I was writing poems and the people were composing music, and we participated in the contests, and I was writing my poems there, I illustrated them with my arts.

And the relations were good. Before the start of the war. And when I told the truth about what was happening, they did not believe me. They said, “You are lying. This cannot be”.

One person from Saint-Petersburg told me, “Why are you lying, I know what’s happening there. You are destroying yourselves. We just want to liberate you...”

– Have you got any acquaintances left in Kharkiv? What do they say? What are your consequences of the things you survived?

– My friend – she saw the bombs flying, she saw how the people who were standing in line for humanitarian aid were shot. She says, I could not orient, I only had time to visit a shop. But there were casualties.

And the morgues are full. In Kharkiv. And it is unknown who lies there. There were bodies lying on the street. Broken. Pieces. Blood...

...The psyche is already ruined. I don’t sleep well. When I got sick, people accepted me well in the hospital. I was in one hospital, I was in another. I passed a treatment course, a full examination.

I have a grandson who takes it all very hard. He is a complicated person. Despite the fact that his grades are very good. But he has the signs of psychic disorders. I began noticing – he looks like a normal person – but he sees the reality differently. I begin to see the signs of autism.

– What do you see, what happens next?

– I want to believe that the war will end. And that the truth about the war will be brought to the people who do not believe in it. I am not a public person. But I guess, I realized that there is some mission in it.

I can only say that I would never, to anybody – as they say, wouldn’t wish it for an enemy...

For their sons, if they can call them, to call them home. So that they would not receive cargo 200. Because our children die, little children...

By the way, my acquaintance’s granddaughter was born. In the basement. And they showed that baby. Wrapped in pink. A girl. They say, pink brings peace.

– Maybe you've got something to say to Russians?

Death is always terrible. You cannot prepare for death – even if a person dies of sickness. But when death is so violent, sudden, unfair, the hearts of the mothers must feel that we also have hearts, and we also have children. And that our life may also be cut short.

For example, I was taken out of the context of my life. I don’t have anything now. Nothing at all. Only my grandson and I. Those are two most important lives. And I want to save them.

And if tomorrow I am told that the war is over… I fall asleep every night with the thought that the war may be over. I think that it is horrible, that it is a dream. That this has to end.

I desperately want those women to feel that they did not know about war. My mother survived war, was on the front lines. A nurse. And she said: Galyna, the most important thing is that there must be no war in your life. It so happened that there is a war in my life. 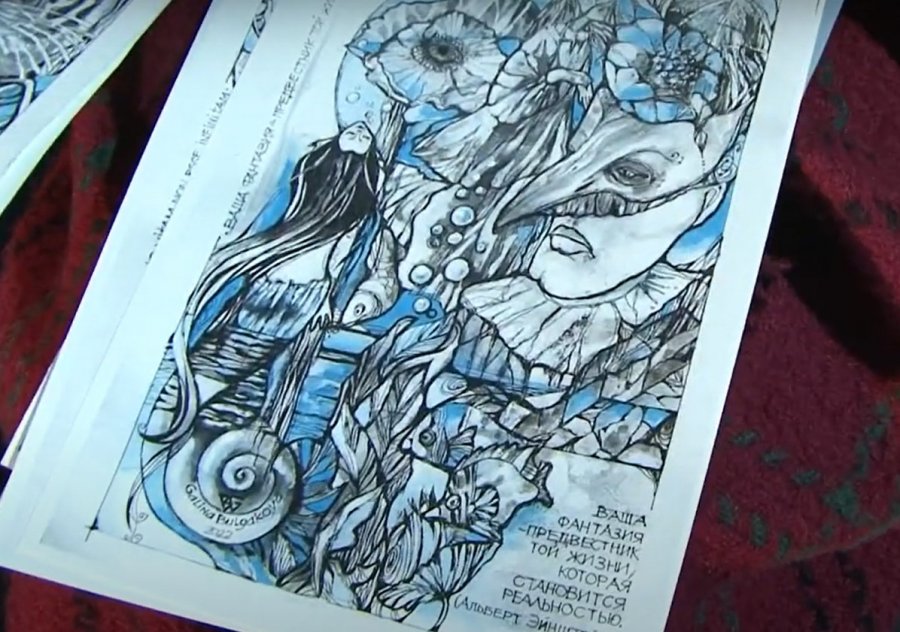 But if they see me, if they hear, I would like a feeling of guilt to exist in their hearts. Because they may not know where their sons are. But they must know it. And they must know what they are doing here...

Halyna Bulgakova is treating her grandson in Lviv. She continues to draw. On small sheets of A-4. And even on posters. And she knows we will win soon. My name is Taras Zozulinsky, I am a journalist from Lviv, we continue our struggle.