‘The helicopter skimmed the treetops.’ Azov fighter tells of his evacuation from Mariupol.‘I was afraid that I won’t be killed at once but will be maimed’ – a resident of Rubizhne‘Mariupol Moses’: A Man Who Took 117 People Out Of The Besieged City On FootA resident of Mariupol is telling how she found civilians killed by a sniper‘I survived 21 days with a shard in my body. I was lucky’‘I washed and buried my brother riddled with shrapnel, and his bloodied and wounded mother was barely in time for the burial…’‘We were lying in the open air, shells were whistling overhead.’ A resident of Mariupol tells about the evacuation and the situation in the city‘The enemy was just under our windows…’ – Anastasia from Irpin‘I saw fire arrows flying from Kherson...’‘... I sang in the basement to calm my daughter down’‘There were more than fifty bullets in the body of a friend’“I entered a store and burst into tears” — three weeks under bombardment in Mariupol “I Gave the Dogs Vodka to Keep Their Hearts Going” (Mariupol Resident)‘The Russians fired at our car,’ a Kyiv region resident recalls
• Voices of war 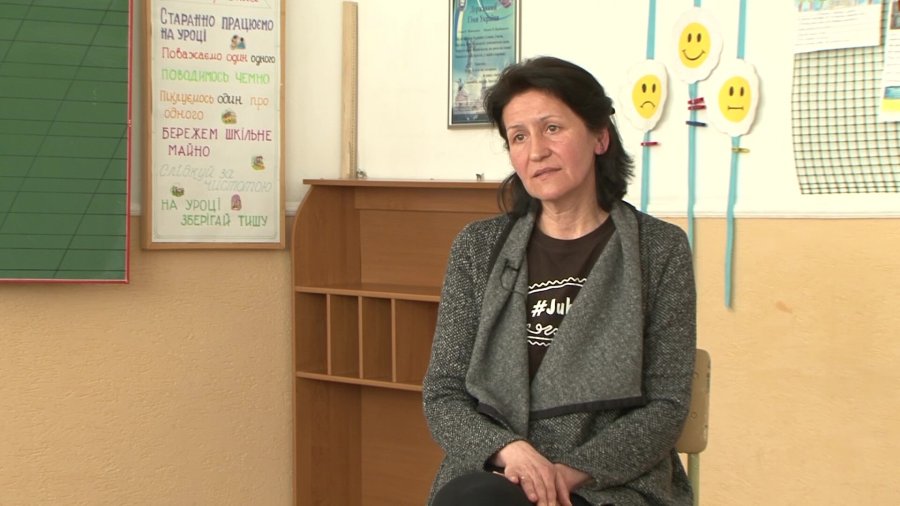 Olena Gurina from Kharkiv has been hiding from enemy shelling in the subway for twenty days.

— I am 50 years old. I used to work at “Slobozhansky Mylovar” (a beauty production company) recently. Then I worked in the Podvirky village.

— How did your first day of full-scale aggression go through?

— On the twenty-third of February there was absolutely nothing wrong, we were watching TV and laughing.

My husband usually wakes up earlier than me, but on the morning of the twenty-fourth, I woke up before him. I heard that someone was setting off fireworks. I said: “Sasha, maybe someone continues to celebrate a birthday. Do you hear these explosions?”

We did not pay attention to this, and began, as always, getting ready for work. At 4.15 we heard explosions… When we got dressed, it was already 6:00 o'clock in the morning. Telephone call. My daughter from Kyiv called me and said: “Mom, the war has started.” I answered: “What do you mean — war?”

She said: “There are explosions here”. She could hear it very well. Her husband serves in the Armed Forces. He called her and told them this information. Then she called us — to warn…

But anyway, it did not fit in our minds, we could not believe it. We got ready to go to work, hoping that everything will be fine. We went to work. I didn't get there — they called me from the workplace and told me to come back home. My husband stayed at the office.

The public transport minibuses were still going, but with a long interval. I stood at the bus stop for an hour. There were a lot of people on the streets with suitcases. When I got home, I called my husband. He said: “I'll stay a little longer and will recall”.

But a woman, an employee from the regional state administration, came out to him and told him to go home. “Don’t you see they are shooting?” — she added. Sasha always goes home on foot, so he quickly got there   — it usually takes an hour.

And constantly, while he was walking, those explosions were heard. When he got home, we sat down on the couch, and the sounds were getting closer and closer...My daughter called and said, " Mom, go to the subway. Don't stay at home, something will fall, explode, and you will die."

Sasha decided we would stay at home. At first, I didn't want to go to the subway, after all, home is home. I couldn’t believe it.

— My husband slept in a room and made a bed for me near the bathroom. We had such a curb in the corner, and I slept there...I began to say prayers. There was such an animal fear as the sounds were getting closer and closer. After all, the windows began to shake, and so did the ground. I spent three days at home. But I couldn't stand it anymore, having no ability to sleep…

After spending three days in the house, my husband sent me to the subway. It's not far from us. My husband and I called each other. I told him I'll call you every hour. We have a cellar. At first, Sasha didn't want to go to the cellar either. But that time he had to get in, because there were strong sounds…

Sasha took me to the subway. I went in, there were a lot of people. As you enter the subway, there are steps. You're coming down. Everywhere people were lying on blankets, apparently, they had already brought them from home.

I had one thin blanket with me.I went down the stairs and spread the blanket on the last step.I sat down.

I was very hungry. I asked for bread and washed it down with water. And I sat there for a long time. Very long. I couldn't sleep. Sasha says: “You need to sleep.” I spread the blanket on this narrow step and lay down. There were volunteers there. I asked if they had any foam rubber. They said: “Not at the moment.”

I spread the blanket and lay on my side and fell asleep… I had nothing, so I was given a disposable plate and spoon. They poured soup. I ate, and sat down on the steps again. I called my relatives.

Sasha took off these three square pillows from the old sofa and brought them to me. I moved a little higher up the stairs, spread out these pillows, and spread a blanket. One might say that it was my place ...

We were given food at ten o'clock in the morning and at six o'clock in the evening. My husband cooked and brought me the cereals that remained in our house. He brought me a toothbrush and a towel. In the subway, it was possible to brush your teeth. Shower — was there or was not — I do not know, I did not go.

During these twenty days, the head was unwashed. I was not bathed. But with the help of a bottle and warm water from the kettle, you could wash and do your women's business.

Once my husband came and went out with me to the vestibule. And here we heard a loud explosion. I even had a cigarette jump out of my hands. A cigarette jumped out! And he sat down. It turns out that, as we later learned, the explosion occurred near us on Moscow Avenue, where the Presidential Academy is located. And when Sasha was already escorting me to Lviv, we walked through the Center, across Moscow Avenue. We have seen this Academy. They dropped such a bomb there… It was as if a huge piece had been torn out of that building. Probably there was an explosive wave, with a very large radius, because the windows and doors flew. The further we went to the Center, the more shops were destroyed. Glass was lying everywhere. And there was destruction everywhere.

— Have your acquaintances and relatives met other events in which they saw criminal actions against civilians?

— People in the subway told that the woman went outside, to sweep near the house. And the shell fell. The wreckage hit her in the stomach. Her daughter worked as a nurse and was in the hospital at the time. The woman died on the way to the hospital.

My husband wanted to join the territorial defense unit. So he went not to the military commissariat, but to the regional administration hall. Before that, the Russians had dropped a bomb on our Kharkiv regional state administration. The witnesses said that the people were thrown away like leaves because of that bomb, from that shock wave. The explosion was so powerful that the people were flying in the air like leaves.

My husband told me that the explosion happened not far from him when he was walking. A girl opposite him was holding her phone, and she dropped it. My husband’s cap started looking in the opposite direction. Because of that wave…

My mother-in-law lives in Kharkiv. She was in the residential neighborhood, at home. We called each other from time to time. Once, she told me: “Olena, I see some smoke coming from the Shevchenko’s factory. The factory’s on fire; it’s been shelled. I’ve seen the smoke, I’ve seen the fire.”

— When did you decide to leave the city? How were you leaving Kharkiv?

— I spent 20 days in the subway. Then my husband told me to go home to have a shower at least. But I was afraid to leave the subway, so I bent down and ran from one place to another. My husband asked me: “Who have you become?” But I couldn’t stand hearing all of that, all those explosions. We got home running from one place to another. I had a shower to my heart’s content and groomed myself. Then my daughter Daryna called. She had already gone to Ternopil with her small child because staying in Kyiv was already unbearable — the child was just a year and three months old. The daughter told me: “Mom, come here, there’s going to be a car.” I told her that I was afraid to go by car. What if something happened on the way? People were said to have been killed right there, in the vehicles. So I was frightened to go. Somehow my daughter convinced me to go by train.

My husband was seeing me out to the train station. There was an intercity train “Kharkiv — Lviv” at 8 am. My husband didn’t come with me. He refused as somebody had to be at home in case someone needed him, in case he could help someone.

I got on the train, but it was tough to part with him. Really hard. He was crying, saying he might never see me again.

I was going by train and thinking: and where am I going? Nowhere. Where am I going to live? My daughter was in Ternopil, and I was traveling to Lviv. Later she explained everything to me: when you come to Lviv, there will be tents with volunteers — come up to them and ask where you could settle down.

— What do your relatives living in Russia say?

— First, we have relatives, on my husband's side, who lives in Moscow. It's my mother-in-law's sister. She has kids, a husband and grandchildren. My mother-in-law wrote to them: "Tania, the war has started. Your Putin is bombing Ukraine..."

They don't believe it to this day. The sister's granddaughter wrote: "We don't believe you. Go to the window and film is there really a war or not". This has put an end to the familiar bond. My mother-in-law told them: "I won't write to you, and I don't want to keep in touch anymore. I no longer have a sister".

No matter how much we wrote to them, how much we have talked with them about what is happening in Ukraine while they sit, do nothing and say nothing, can't even get up, go out to protest. If every person in there in Russia would go out, and it happened en masse, at least something could be avoided.

But they don't want to hear it. They still don't believe that Russia is bombing our Ukraine.

— I would really want to gather all the mothers, and to stop this war at least somewhat, I would fall to my knees and beg… So I can explain to them. And so they can explain to their sons, and then they won't go to war… I, as a mother, I would beg them on my knees, to convey to them even the part of the truth of what is happening here.

Translation by the Center for Civil Liberties.

The article was prepared by the Kharkiv Human Rights Protection Group under T4P (Tribunal for Putin) global initiative.
Share this
x